A Real Man of Steele or Forty Years in Canada 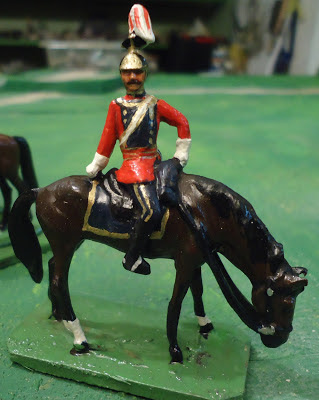 Colonel Flint of the Queen's Lancers, 1866

I haven't made a lot of book recommendations but I enjoyed this one so much I can't help myself. It is the autobiography of Sam Steele and by default an account largely of the formation and development of the North West Mounted Police. My copy was published as part of the Prospero Canadian Collection but is available as a free ebook. http://archive.org/details/fortyyearsincana00steeiala

He began a military career by volunteering for the militia during the Fenian Raids, served in the Red River expedition, was a member of Canada's first regular artillery battery where he served along side not only a veteran of the Crimean War but also an 88 year old officer who had fought in Bull's troop RHA at Waterloo!  He joined the NWP when it was formed and rose to high rank as he served through the settlement of the west and the Riel Rebellion, the construction of the railway through the Rockies and the Yukon Gold Rush. When the Boer War broke out he raised the Strathcona Horse and led it in the field before being asked to form a South African Mounted Police. Finally he served as Major General in the Canadian Army during the First World War.

Among the things that make the book so interesting are the many descriptions of his encounters with a long list of people, some famous including numerous British and American officers to Indians such as Sitting Bull, others less well known such as the scout Jerry Potts and others completely unknown. Some of the incidents he either witnesses or took part in or reports as hearsay are worthy of any adventure moves.  More than that are the descriptions of every day life and service, all the nitty gritty of how many miles ridden on patrol in how much time, provisioning details, how various crimes were solved and on and on. It is also a description of the rapid change from wild prairie peopled by warring Indian tribes and whiskey traders  to "civilized" farmland with modern cities of up to 200,000 people by the turn of the century 30 years later.

Of particular interest to me, despite being brief, is of course his part in the South African war. Oddly enough, his accounts of a few skirmishes, like the accounts of several Boers that I have read, are reminiscent of those lithographs and illustrated news after all. It is possible that I will have to relent and forego the big battles and fight the little war instead. The problem still remains of scale, something on the order of 1,000 yards to the foot with a line of 12 figures well spaced out representing a battalion and patrols of 1 or 2 figures having a role. There will definitely have to be some sleight of mind and some theatrical magic employed to get the right effect. 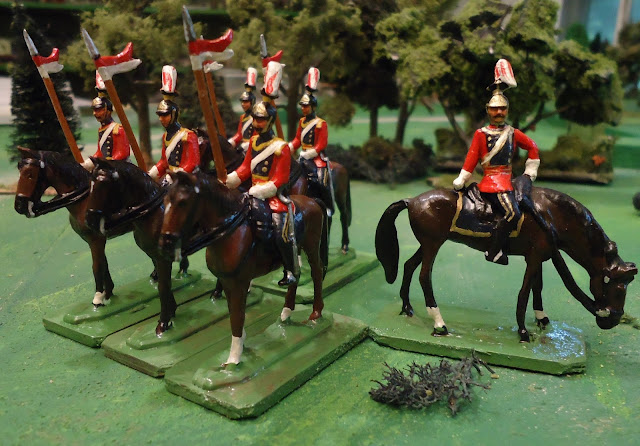 The Queen's Red Lancers from Faraway's Household Brigade.
The uniforms are copied from those of the English 16th Lancers between the adoption of the tunic in 1856 and the switch to black plumes in 1880. The figures are Zinnbrigade 1900 Prussian Uhlans right out of the mold apart from the officer and the addition of rolled cloaks. He was made from one of the lancers. I cut off the lance, straightened his right arm, removed his left arm and cut him at the waist.  I added a left arm from wire and putty and used an ACW horse from Merten. I kind of wish I'd gone for a more authentically toy soldier single yellow stripe on the pants and a single bold red stripe on the girdle rather without the more accurate "light" that separates them but I'm not redoing them. Final basing finish for all of the Atlantican armies is under discussion.