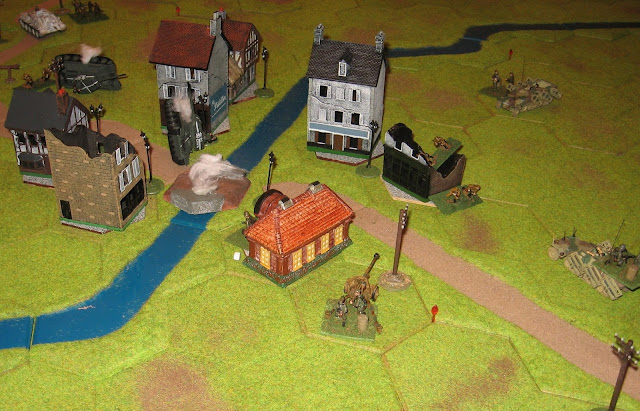 4 Heroes of the Revolution hold in town as the bridge blows behind them.

On Thursday I visited Ron for another East Front Memoir game. Reserve Demolition from Scenarios for Wargames. There are 2 options for blowing bridges in memoir, one where it is automatic and one requiring a die roll. We went for the latter but had trouble duplicating the proposed system where messengers arrive with orders, first, to delay blowing the bridge and then, finally, to blow it. We ended up shuffling 2 airpower cards into the deck to signify that the bridge could be blown. Any player pulling one of these had to place it face up but could draw another card. We weren't actually using aircraft rules.

I can't remember when I had such good cards and dice, at least early on. I stormed on the table, destroyed a counter attack without blinking and pressed in to town with tanks and infantry. Then I stalled  and was blown apart by artillery and a counter attack by infantry. By the time I got more troops up the order had been received to blow the bridge. It took a couple of turns but I'd run out of cards and while I was able to  infiltrate an infantry unit across the bridge, they weren't able to stop the demolition. However, the scenario required Ron to save 60% or more of his army. My early push had taken out 5 out of 9 units leaving him with just under 60%. A draw! Urrah!