Three Spokes Are Better Than None.

Yes rumours of my demise  etc., etc..  I've just been off to help celebrate a friend's wedding and the slightly matter of a 4,200 km round trip has kept me off the web for the last week, apart from a few quick peeks over coffee and wifi at various Tim Horton's. (thanks Tim!). But, now, I'm home and sort of  rested (not to mention once again thinking that it was a kilo-kilometer too far for a 1 week round trip) and regular blogging should resume this weekend.

I knew I was starting to recover when I started applying paint to some of those 40mm Merten medieval ladies this morning and pondering rules. Its true, I said I was going to use a slight variant on Medieval Mayhem. After all, it is at just the right level with what seem the sort of right individual focus but still simple, but there is all of that die rolling. Its not so bad in a multi-player game where each player has a dozen or so figures in a few groups but I can see working up to solo games with 50 or 60 figures or more in  a dozen or more groups and never mind movement, with combat followed by effect dice and morale, there can be several hundred rolls in a turn. Quite apart from the wrist exercise and time, it seems to diminish the drama not to mention numbing my mind.

It still needs some thinking but surely its not beyond me to do something as simple as Rattle of Dice, (Rattle of Swords?) with provisions for heroes, and armour and magic to provide a fair simulation of comic book and fictional battle. Stay tuned, the wheel is being reinvented again. 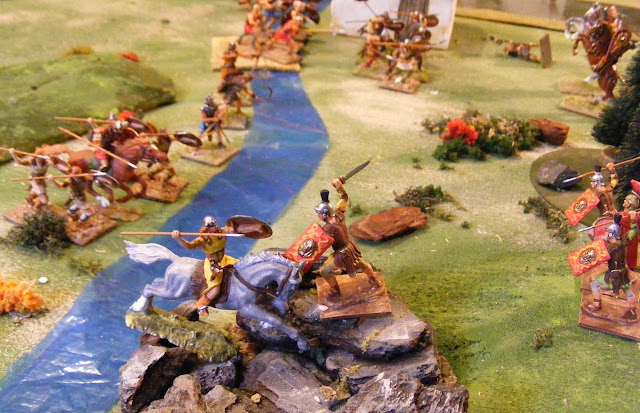 Archive photo from July 2010: Episode 11 Raiders in the Pass