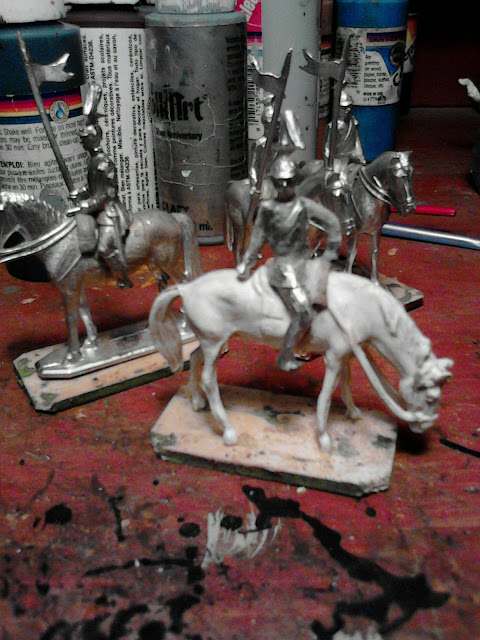 The Queen's Lancers in training. One sample lancer is now painted and the rest are well on their way.

Well, three years have now passed since my heart attack and I'm still here!  I was going to look at plans for the year ahead but on the whole its steady as she goes. I feel that I've settled questions of rules, game scale and feel and so on, so this year I want to spend a little more time preparing games and designing some new scenarios. I also want to mix some different games along with the more of the same.

I expect July to be a slow game month but starting in August I have a few things that I want to do.

Prince Valiant. Rather than bringing out my Elastolins for a conventional game,   I want to design and play an adventure/quest skirmish game with Prince Michael and a small party travelling across the table and having random adventures possibly leading to a follow up battle game. Lots of design and prep work to be done as well as some painting of ladies, witches, centaurs and 'knights'.

Atlantica. I've been really enjoying painting up toy soldiers from the 2nd half of the 19thC, takes me back to my pre-wargaming days when I used to convert Britain's toys into models. Based on experimentation I don't think I would be happy with scaled down late 19thC big battles in 40mm. It seems to me that the optics are just wrong unless I were to adopt a more overtly abstract approach using a small number of figures in a mini-diorama on a pedestal base with label and a set of rules designed to treat the base as a playing piece and that's not where I want this collection to go. Perhaps another project sometime in the future. Instead, I'll continue to work towards smaller encounters with a Colonial flavour and a back story. Lots of Red coats and Native Atlanticans  to be sculpted and cast and scenery to be made. It'll take a while but I'm looking forward to it.

40mm Oberhilse troops trying Seminary Ridge on for size. I was able to fit almost the same number of figures on the same frontage but it just didn't feel like a big battle. At first I blamed it on the depth of the units but I think it has more to do with the optics of the height of the figures  and terrain compared to how far away/close the enemy is. I tried fewer larger units and just fewer figures over all but the lack of manoeuvre room and the look didn't encourage me to continue.

Other games?  Expect a 16thC game, more 1/72nd ACW, and some of whatever takes my fancy.