The game began with the appearance of a dusty wagon escorted by redcoats  and a handful of Larsen's Lancers. They had been on the road for days but remained vigilant as there were rumours of discontent amongst the Brethren of the Plains as they settlers of mixed blood who had moved inland were now calling themselves. The convoy was nearly half way through the shallow valley when the first rebels topped the ridges on either side, just out of rifle range, and descended rapidly into the valley.

Seeing no enemy ahead, the Colonel deployed skirmishers to cover the rear. ordered the lancers to support them and pushed  the column forward. As the first shots rang out it was immediately obvious that the reputation of the Brethren for accuracy was well founded. Suddenly, from the woods ahead, a horde of wild Atlantican warriors surged forward with blood curdling screams. Calmly the Green Tigers levelled their rifles and fired a last minute volley that sent the warriors running for the woods even faster than they had run out. 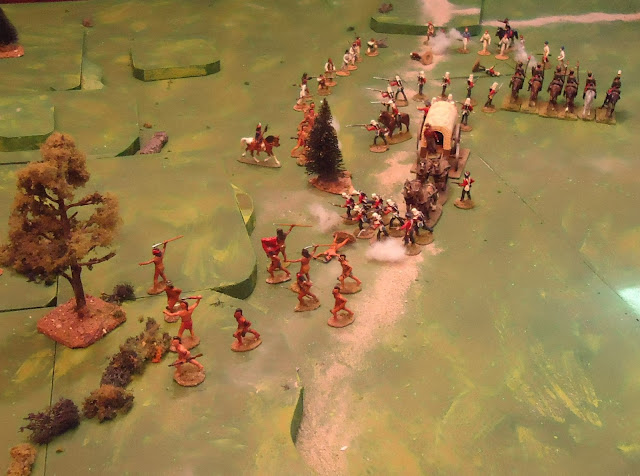 Taking advantage of an initiative shift, the ambushers rush the wagon but are repulsed.


It was time for the coup de grace. The lancers were ordered forward to sweep away the enemy to the rear and end the encounter. The lancers dropped their points and galloped forward expecting the enemy rabble to flee but these held their ground and aided by a flanking fire, dropped 1/2 the lancers as they rode in. The remainder reined about and galloped for safety, rallying at the head of the valley.

Suddenly more Atlanticans appeared on either side, opening a hot fire and threatening the wagon. Acting quickly, the Tigers deployed a handful of skirmishers to cover the front of the wagon and doubled the rest back to cover the flank while the company of Buffs covered the rear. The remnants of the Lancers,  veterans of many a fray, rallied and prepared to intervene again. To any veteran of fights on the North Atlantican plains, it was no surprise  that the warriors who had run back to the woods reappeared as quickly as they had disappeared. It was a surprise though when they over ran the skirmish line and swarmed the wagon. Before they could loot it, the Lancers charged again and drove them off for good. 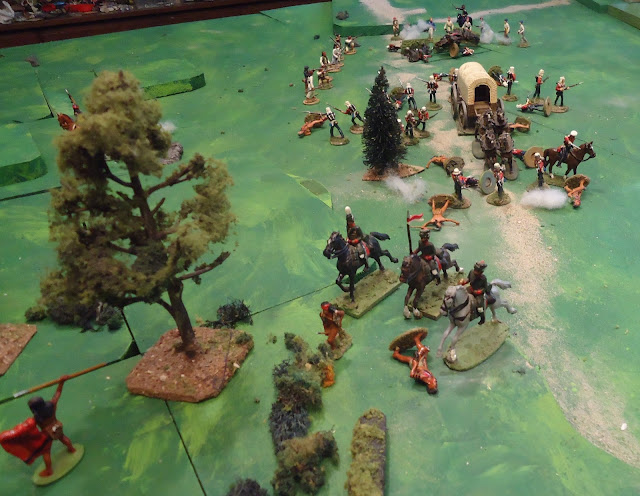 So far so good.

Suddenly, the Black Fox, who had been lurking behind the brethren's skirmish line, let loose a war whoop and waving his sword led his men forward. The red line had been stretched too thin and had suffered too many losses. The brethren swept it away and were about the wagon before anyone had time to react. Cursing, the Colonel gathered up a handful of Tigers and was able to lead them to the rescue before the rebels had time to loot the wagon or take charge of the team. All was not yet lost. 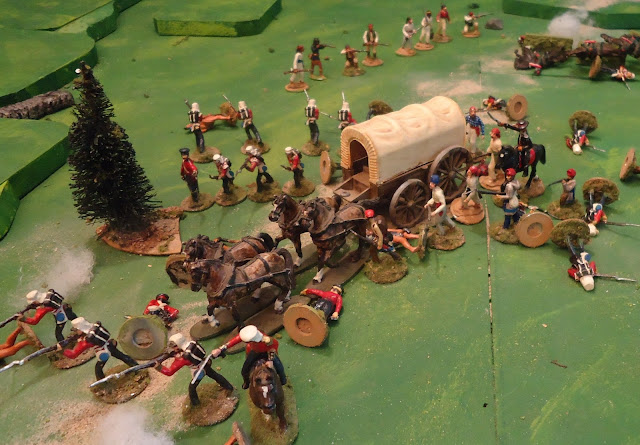 A fierce and prolonged melee followed but despite the Fox going down with a slight wound, the soldiers were no match for the enemy in hand to hand either and were soon retreating up the hill. Counting up his losses, the Colonel decided that he had no choice but to abandon the wagon and attempt to save what was left of his men. 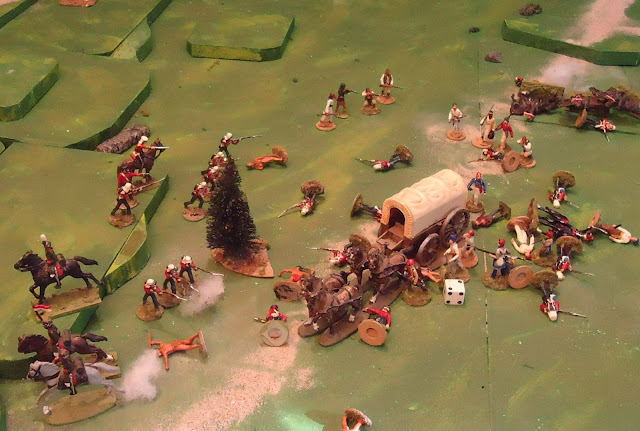 How did it come to this?

Well, there we are, an enjoyable hour or so of gaming with several turns of fortune. There may have been some question about one or two of the choices  made by the good Colonel but then who knew the enemy had so many 6's in them?

The rules actually worked better than I expected for such a small game but that's OK.  I was especially surprised that the melees worked even though there was often only 1 or 2 dice per side but then I realized that it was not so different than 2 Morschauser stands facing off and my desire to fight out individual combats was merely a cultural hangover from other Colonial systems.

So will I be using Rattle of Dice on a regular basis? Not for the upcoming Atlantican campaigns, the plan is still to use MacDuff which is not much more complex once you extract the actual rules from the all the explanations. I have, however, updated MacDuff to use the same morale system as Rattle and Hearts of Tin, twiddled some details of the melee rule and have gone back to simpler terrain and formation change rules. All as a result of the game at Huzzah where I wasn't 100% pleased with some aspects and where I improvised as GM to get around things.

What this means is that, in practice, the main differences between Rattle and MacDuff are now the figure to figure melee resolution mechanism and reaction fire rule in MacDuff as well as the option for card sequencing instead of initiative.  What I need now is an "everything you need to play"  2 sides of a sheet summation of MacDuff for the 1860's.