The first step in cobbling together a new set of rules is to figure out just what you want from them and how you intend to use them. Easy to do in the broadest sense but somewhat trickier when you try to force yourself to be explicit.

In this case, my intent is to play tabletop miniature wargames which evoke the battles and skirmishers from epic or heroic literature whether fictional, historical or fantasy. Examples of the sort of literature I have in mind include Hal Foster's Prince Valiant comic strips and Robert E Howard's Conan tales but also Rosemary Sutcliffe's novels. Note that the intent is to evoke these not replicate them. I will also include enough of a nod to history as to satisfy myself.

As in the use of negative space in art, sometimes it is useful to define what the rules are not.

The majority of games will be solo but I do not wish to design a player vs the game (or GM) style of wargame but desire a conventional player vs player approach for the rules. Should a one sided approach be of use for a particular game then suitable techniques can be incorporated into the scenario design.

I also do not wish a role playing game or a game focussing on individuals other than the main heroes. The rules will need to handle the occasional one on one duel style of combat but most games will involve clashes between groups of men whether these form a small raiding party portrayed at 1:1 or small armies portrayed at 1:10. The difference will be purely theoretical with Heroes having their capabilities and separate identity and everyone else operating as units of men.

Lastly I wish the game to be as gimmick free as possible. There should be an absolute minimum of overt rules to resolve actions but the story lines and player decisions should emerge from the player's imaginations and the scenario design not the game mechanics . The foe to be outwitted should be their opponent or the situation, not the rules. The combat and morale dice should be sufficient friction to render outcomes unpredictable. 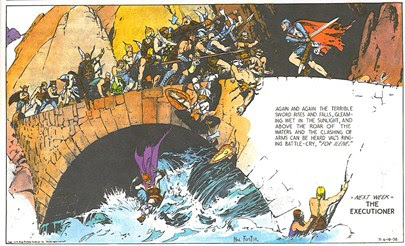 The Prince, wielding the Singing Sword for the first time, holds a bridge against a "unit" of Vikings, for a while at least.
Illustration borrowed from the Wikipedia article on Prince Valiant.

On the whole my expectation is that missile combat will be normally be an annoyance or spur that causes some casualties. Individual combat between heroes may be quick or prolonged but will usually end with one or the other being killed or incapacitated. Principal characters will of course normally be wounded and taken prisoner or be rescued or left behind rather than killed.  Melees between units should often be prolonged with one side being suddenly and irrevocably broken, either by being surprised, perhaps by an attack in the rear, or by being worn down.


Mechanic wise, the rules in general will be similar to Rattle of Dice, with initiative, move or shoot, fight melee etc with simple rolls and simple tests but with extra rules for the characters.

The first draft should be ready in a day or three.