There I was, game all set and ready to play. Since the attackers were presumed to have just spotted the defenders, the latter were granted first move. There seemed no justification yet to move so the 4.7" opened up and blasted the head of the column with 2 hits. That was easy, splendid opening to the game. The unit cancelled 1 hit by falling back but had to take the other. Then it was time for the attacking Free State forces to move......ummmmmm suddenly I had a problem.

I hadn't taken any time at all to consider just  how the force available might carry out their mission and despite having written the rules, I wasn't sure of the unit capabilites in this situation or what the best plan of attack was. In fact I was probably feeling much like the inexperienced little plastic general on the table. 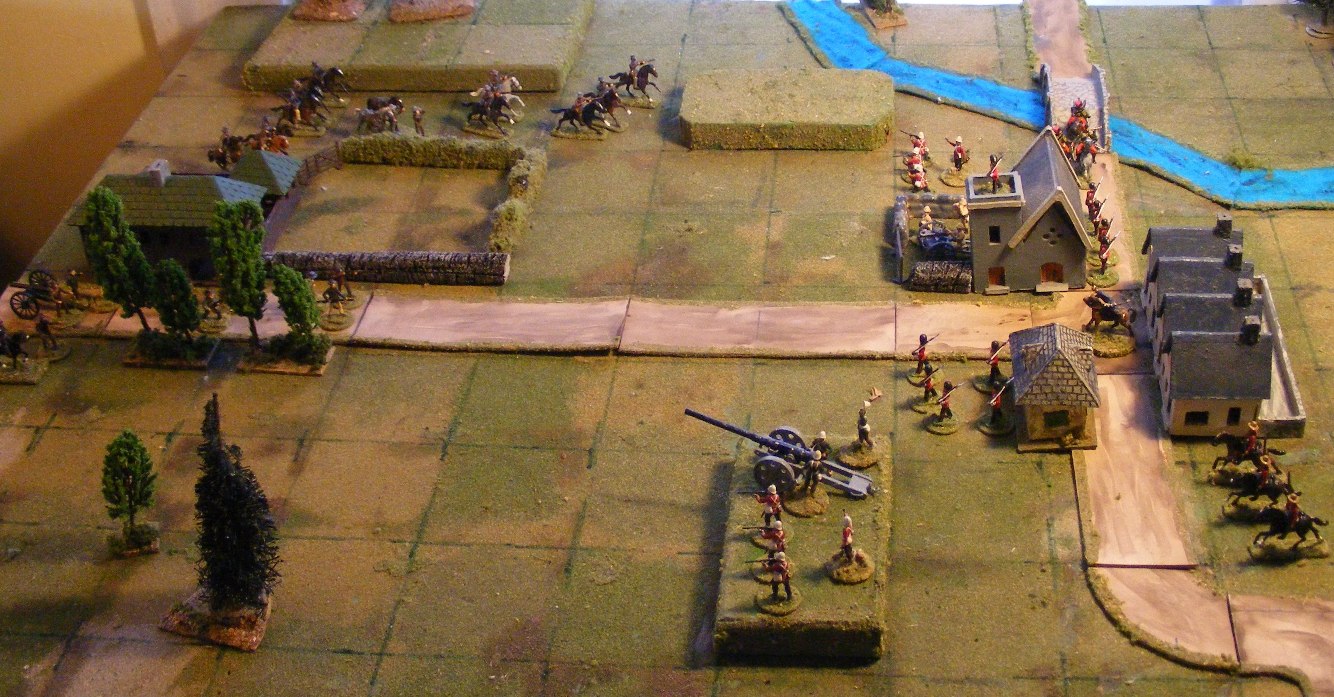 My first instinct was to send the mounted troops through the open country on their right  to turn the Nottinglish flank and cut the road. It was a good instinct but I didn't know when reinforcements would arrive and it seemed like the best bet was to move fast, seize the bridge objective and prevent the Imperial troops from crossing. So, off they went leaving the infantry and guns to handle the rest.

It didn't take long to realize that a defile made the approach difficult and the machine gun in town made it dangerous to approach. Worse, between the river and the hill there was no way to concentrate enough rifle fire on the enemy to drive them away. It would have to be done the hard way.

No sooner was the attack set in motion than the Imperials rolled a 6 and their cavalry appeared. It was going to be one of those days.

Too late to back out, a unit of mounted rifles charged and to everyone's surprise, drove back the cavalry but not being cavalry could not pursue. On the next turn they charged back in while their supports charged the infantry. Both were repulsed but the enemy had been weakened. With sharpshooters moving up to support the attack and supporting guns and infantry pinning the enemy center, there was not going to be a better time to risk some casualties and press the attack.

Then, above the din of battle, could be heard the clear notes of a bugle followed by the sounds of men singing. "Come on Soldiers of the Emmmmpire. The day of gloryyyy has arrived!" The marching song of the Imperial Marines. (You'll have to imagine the tune, its very catchy, could bring a nightclub full of people to their feet).

Rifle fire drove the Imperial artillery back, off the road and ..........into a good firing position, hmm. With the Free State artillery that was supposed to be supporting the attack stalled in the rear and the defenders around the bridge now outnumbering the attackers in that sector, the attack turned into a pinning action.

The focus switched to other flank where an artillery duel was in progress with honours even. The Colonial Mounted Rifles had been switched to the right to backstop against the first attack but with the gun with its escort now being attacked by 4 infantry, a gun and sharpshooters, they were quickly shuttled back and the 2nd Guards ordered forward as well.

Before the reinforcements could arrive the first assault rolled in on the gun but was repulsed with losses. Supports were close behind but suddenly the Free State orders dice hit a cold spell. As the supports edged forward piecemeal, the sharpshooters opened a heavy fire on the gun. To relieve the pressure the Guards came forward with the bayonet and were stopped dead by accurate fire. Repulsed, they spread out and returned fire without effect and were forced to give ground to avoid being decimated. Their sacrifice was not in vain. By the time the Free Staters were ready to resume the attack, the mounted rifles had galloped forward to flank it, dismounting, and pouring in a hot fire supported by infantry swinging down off the hill to protect the gun The Free Staters were shot to pieces and forced to give ground.  The general rode forward to steady them but was struck by a bullet.

The sharpshooters continued their fusillade against the 4.7 and forced it to limber and retreat but there was no one to follow up. Taking advantage of the confusion in the Free State ranks, and with the gun safe, the Nottinglish infantry and mounted rifles fell back into dead ground, daring the enemy to come and get them. As the wounded General climbed back into the saddle he contemplated doing just that but his army was battered and now the enemy was in position with equal numbers and fresh units. The opportunity to keep the enemy allies apart had slipped away. He ordered a retreat.


What? I had become so used to games ending with 2 men and a dog rallying for a last stand that it didn't seem right to end a game with NO units destroyed.  What could be wrong? Should I renew the assault? The game had already run nearly 2 hours instead of the one I had planned but an extension was possible, I just didn't feel like it. Hadn't it been fun? Yes it had. What were the odds of a final attack succeeding? Slim to nil. Oh. Was that due to the troop mix? The victory conditions? Partly yes and yes. If this was an actual campaign and I was playing the Free State though, I wouldn't throw more men away so why should I do it now? Oh. Ok, that actually worked then.

So was it fair? Since the Free State sharpshooters and mounted rifles were originally Boers I had thought about giving them superior firepower but hadn't, was that a problem? No, they had actually done quite well. Was it just a string of bad luck? The timely arrival of reinforcements? Partly, but, looked at after the fact, it had been a battle plan that was dependent on luck that ignored terrain and the enemy's strengths while minimizing the attacking unit's mobility advantage and the ability of the sharpshooters and dismounted rifles  to win firefights in the open. It also ignored their inability to take heavy casualties.  When the Free State units started taking hits early on, instead of pressing forward to take their objectives before the Imperial troops could arrive, they gave ground to avoid the hits but at the cost of lost time.

In other words, it was a risky plan carried out in a cautious manner. That's not usually a recipe for success even though it came close twice. It was a recipe for a good game though!

Note: No changes were deemed necessary to the Square Brigadier rules (not often I say that!)
Posted by Ross Mac rmacfa@gmail.com