I had just about talked myself into treating myself to a nice, attractive, practical, professional, hex mat from Hotz Artworks this fall and even had funds earmarked. Then the Prince August 7YW artillery sets came out and I needed some additional 54mm guns and oh dear, the warchest was empty again and those damned diagonals were still there gnawing at my mind. 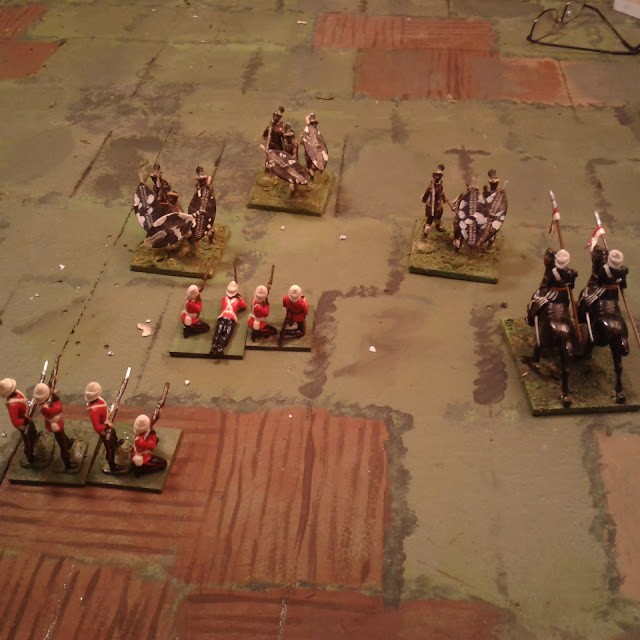 I didn't set out to do offset squares. My back up plan was to draw hexes using the Archduke's scheme of starting with offset rectangles of particular dimensions and then then adding the angles. Not being a wiz at either math or accurate measuring, I none the less calculated that I would need rectangles of 4" x 3 15/32nds" and had already worked out that I could start by shifting the Northern and Southern edges of each square in alternate North/South rows 2" South. I was about a quarter of the way done when I realized that since I wasn't in the slightest concerned about inequity in speed  but only with getting rid of corners while increasing the number of directions in which a unit could travel, I should give offset squares a go. That way I only had 1/2 the east-west dividing lines to redraw/mask and I'd be done. More than that my existing hills could easily be made to fit and still be flexible with minimal work.  Two hours later and the board is ready for a trial game.

Now as to that other little matter, I am used to silly little things like receipts and statements going astray over the course of a tax year but a toy soldier head going absent over a mere 19 years is a different matter!

It took almost 10 minutes of searching in day light before the culprit was found consorting with a collection of 40mm heads. Then I had to find a trumpet, something I didn't actually have back then. Oh look, that Hussar didn't originally have a trumpet, I wonder where it came from, they are over strength anyway and won't be able to take everyone into the field...

"Order from the Minister of Defence in Ottawa Colonel, the Princess Louise Hussars are to surrender that trumpet to the Governor General's Body Guard."

"Yes I realize you are a New Brunswick Regiment and the Bodyguard are an Ontario Regiment but we're all Canadian now and in matters of defence, orders from the Federal government take precedence and trumpets are even scarcer than rifles right now."