Striking the Diecast Alloy While the Idea was Hot.

Sometimes its best to act on a thought while its fresh in the mind. 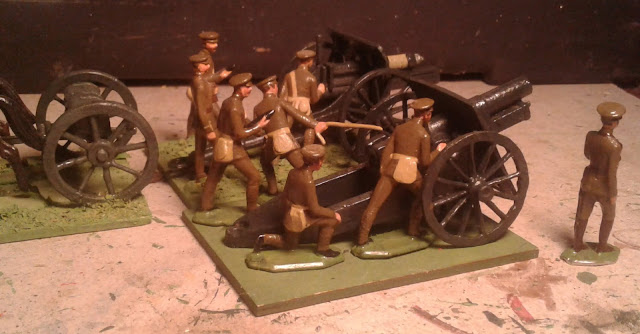 After looking at various pictures of the real 4.5" Howitzer, the main things that struck me were:

a) The wheels and overall height were similar to those of the 18 pdr field gun.

b) The barrel was only as long as the recuperator but the configuration with the barrel on top is the same as the Britain's 25pdr (the toy I was starting with) but opposite to the 18 pdr which was the only other gun available for me to work with.

c) The largest wheel in the latest Prince August SYW mould is very similar in size and spokes to the wheels on the Crescent WWI gun.

d) I have become more comfortable working with die cast metal after frigging with the 25 pdr last fall.


So, roughly my steps were:

A. Separate  the one piece gun & shield  from the carriage.

B. Cut off the old axle holder.

C. Drill a hole at what looked like about the right height, insert a trimmed finishing nail as an axle, and add 2 PA wheels from the bits box, making sure the wheels will turn freely (It's supposed to a toy after all.)

D. Deepen the sockets for the gun trunnions to lower the height of the shield and trunnions then use some putty to push out the bottom of the shield thus increasing the angle of the barrel.

E. Glue it all together.

OK back to those Cycling Jaegers.
Posted by Ross Mac rmacfa@gmail.com