Having added some of the missing units and de-tweaked the rules a little, I decided that it was time to tweak the scenario and play another solo test. If that works then I can take a break to play something else while I paint a few more figures and work on terrain. 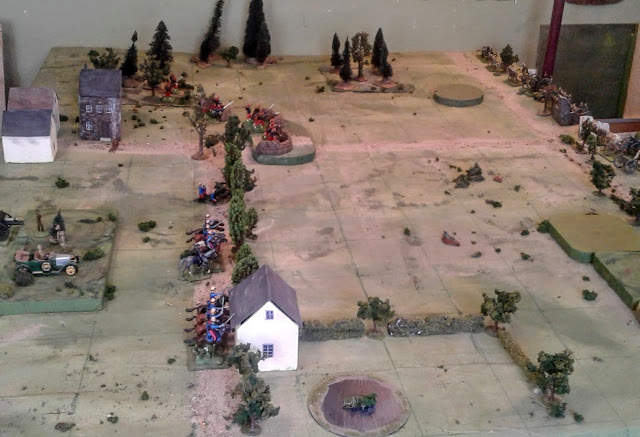 This is essentially the same layout as originally planned but with a few adjustments. The most important is that the allied front line has been moved back and the depth of the German deployment area increased. I have also awarded victory points for the rear woods on the far flank and the farm on the near side as well as for the central hill and each block of the town as before.

Perhaps most importantly, the higher infantry movement rates and ability to move and fire with a penalty to both have been restored so that the Germans have more chance of actually reaching the main town with time to attack it.

In addition to now having the always planned 4th battalion of German infantry I have decided to backtrack on my decision to split up the regimental MG company and will instead field it as a pure MG stand with an extra die but not capable of firing and moving or of assaulting.

Now to see what, if any, difference the tweaking makes to the game.
Posted by Ross Mac rmacfa@gmail.com