Don't worry, I'm not going to sing, but the Bicycle Scouts are done.


The uniforms are a tiny bit darker than intended, an unfortunate side effect of mixing colours in a casual fashion. Since some colours dry darker, it can be easy to misjudge slightly when mixing a rarely used colour. An organized sort of person would probably make a careful note of exact paints used and exact proportions but where's the sense of adventure in that?

There should also be a number on the shako cover but I need to figure out if they should wear the number of the Jaeger regiment they are part of or something else.

The black leather is questionable but I was getting tired of the brown and Nash's Almark book shows one Jaeger in his grey-green uniform with black leather and that was good enough for me! 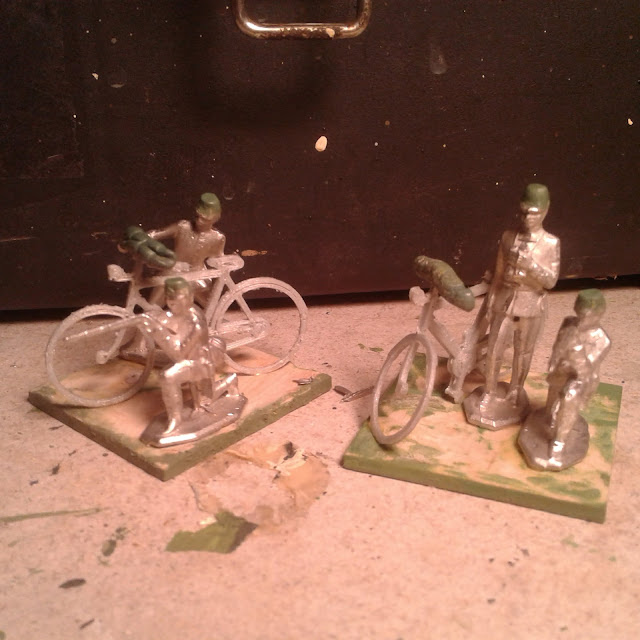 I was rather unsure what to do about the missing handlebars since the stand needs to be rugged enough to travel to conventions. Luckily I found a picture of German cyclists with their blanket and great coat rolled up and strapped to the handle bars. A close inspection would reveal that the Officer's bike has invisible handlebars underneath the blanket roll.

Next up is, well, a Mystery, even to me at this point.
Posted by Ross Mac rmacfa@gmail.com