The Green, or Government, forces are ready to go with 12 units. I've got a slight hiccup with the other side though since  it turns out that the Herald & Lone Star figures who are going to form the bulk of the Rebel infantry are actually rather green themselves, I had thought they were more khaki-ish like the Crescents were before I painted them. Oh well, the Crescents were smaller like the $ store figures I wanted to use in the Green army and its done now so it'll be the ragtag Government forces with a mix of obsolete and modern weapons and uniforms against a well equipped up to date Rebel force.  I smell foreign support in the air!

Not sure I have the Oomph (technical term) to refurbish the rebels before I play a game, especially since I'm now planning to leave the WWII Canadians intact and see if I can find them a new home. This'll mean eventually finding/making about a dozen replacements to reach the planned OB but there's no rush. I have sabots ready so they can play as is.

While I want the games to resemble a One Hour Wargame, ie quick and easy to set up, play and put away, I'm actually planning to use The Portable Wargame for rules since I'd like to have them as the official rules for one of my collections. I am, however, contemplating a few minor tweaks to suit myself.

1. HQ Company. Instead of having a commander who can join a unit and boost its ability to shoot etc, I'm going to make it an ordinary unit but with a range of 1. It will not be allowed to initiate Close Combat but will be allowed to defend itself if attacked. It will still have 6 SP's so it'll take more than 1 lucky roll to eliminate it but if the HQ is eliminated it will still have a big negative impact on Army Morale (Exhaustion). In order to give players a reason to have one, it will not be included in the army's (sic) strength for scenarios but will be a free extra. In addition if using the variable activation, each turn the HQ may add 1 to the activation if it has LOS to an enemy unit and in addition may directly activate 1 friendly unit within 3 squares regardless of whether it can see enemy or not. If it leaves the table it will be treated as eliminated including the loss of its remaining SP's.

2. Unit types. Given the toy soldier element of these armies, I am going to do a short capabilty chart for only the units that I will field and some of those units may have slightly different capabilities such as longer ranges for a generic artillery battery than its appearance might suggest. As an example I am thinking about taking the "Heavy" infantry idea from OGW to make a reinforced infantry company to replace straight MG units.

3. PIN. I am going to modify the Pin rule to allow Pinned units to retreat into adjacent cover as long as they don't move adjacent to an enemy.

4. Hit Effect Chart. Lastly, instead of using the Poor/Average/Elite hit chart which makes it easier for Elite units to retreat, while allowing Poor units to fight to the death if asked to,  I am going to just reduce Poor units by 1SP and increase Elite units by 1SP.

5. Armoured Infantry. These represent infantry with integrated armoured carriers that support their infantry in combat rather than being 'armoured taxis'.  These move like a tank and count as armoured against shooting but count as infantry when shooting and in Close Combat. They are likely to be Elite. 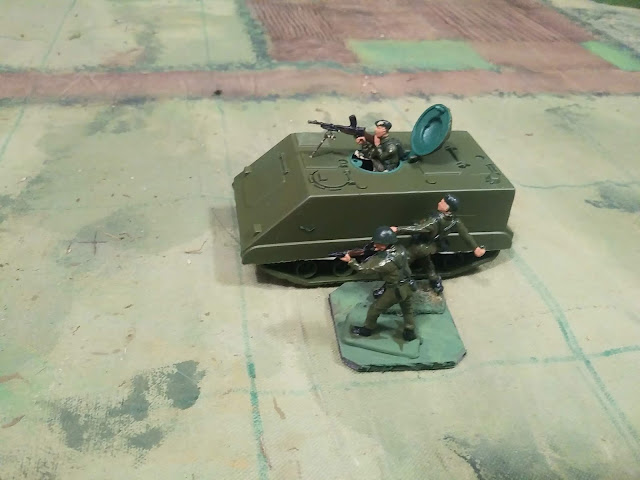