As predicted, there wasn't much hobby time last week but I  did get 2 games in: the Prince Valiant solo game and a remote 1914 'A Gentleman's Wargame'.

It was good fun and a great chance to chat with and get to know long time internet friend Nick Stern better.

The Prince Valiant inspired game was based on the CS Grant Wagontrain scenario from Scenarios for Wargames which I believe is now back in print. It was also a test run of my latest attempt to adapt my Fall of Rome games onto my hex grid. 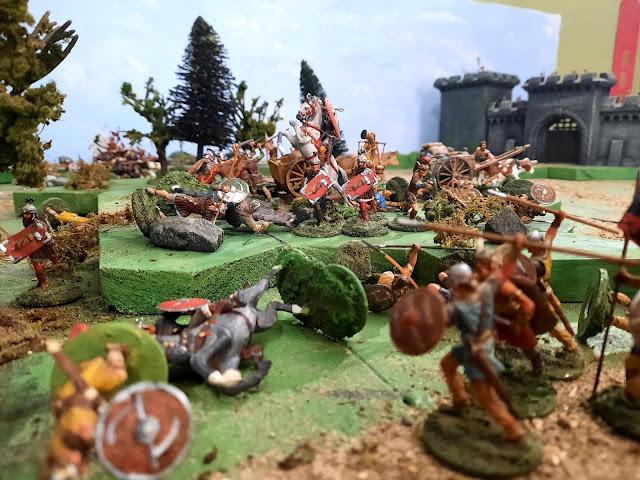 I have made several attempts over the years to learn to enjoy single figure, semi role-playing,  'skirmish'  games but my heart and mind just don't seem to run that way. This time, I  decided to focus on a "board game" approach with fixed units on hexes but with simple rules that might be accessible to non-wargamers but still appeal to me. (You know, the sort of thing one.  could perhaps take to a seniors care home a few decades from now.)

Early days yet, and they aren't properly written up, but the feel of the game was good and I enjoyed it.

I have already started re-sorting the Elastolin figures that I have painted back into fixed units but now of 6 infantry, 4 light infantry or 3 cavalry,  and planning a fixed maximum OB for each faction.

I expect to see them appear on the blog more frequently this year but there are still those new ACW lads who have yet to see the elephant.