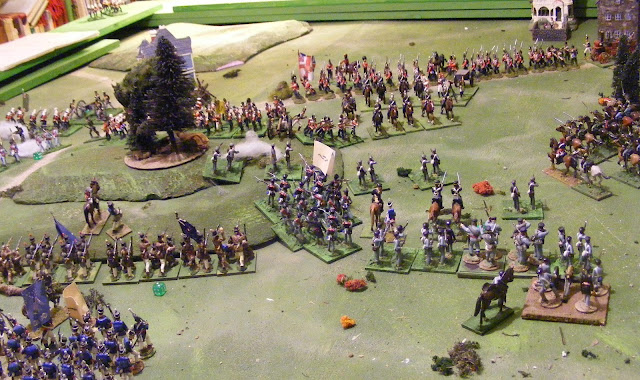 After a battle is over, it is often hard to recreate the exact sequence of event. The same is often true of wargames. In the photo above, we see the American 4th Brigade mustering for their attack on the hill, preceded by the Bangor Rifles who have just driven the last of the Canadian riflemen from the hill. These fell back through their supports and reformed on the right flank. In the background, the Bodyguard have not yet received  their new orders and are covering the deployment of the British 3rd Brigade.
At the foot of the hill, the Ohio regiments have rallied and are preparing to climb the hill again. Behind them the reserves are advancing and are about to swing in to occupy the center of the hill. The guns,  rather belatedly, have begun to move forward with them. On the left, the US 1st brigade faced the 49th Foot supported by 2 stands of riflemen, spread thin to plug the gap while the rest of the British 2nd brigade prepared to deploy. In the rear, the British battery, driven off the hill after the 1st melee where it suffered 3 hits, has deployed at long range and prepared to fire on the hill. If the British win the next initiative, their line will be reformed and the 2nd brigade will be poised to counter attack.
They didn't. The Americans grabbed the initiative and charged forward. The 49th were supported by a thin skirmish line of riflemen, in the melee, the 49th and the rifles, being from separate brigades check their status separately, the skirmishers got lucky and suffered no hits but the 49th was defeated and forced to retreat, a few hits from being shaken. The Americans, still engaged  by the skirmishers hanging on their flank are not free to pursue. 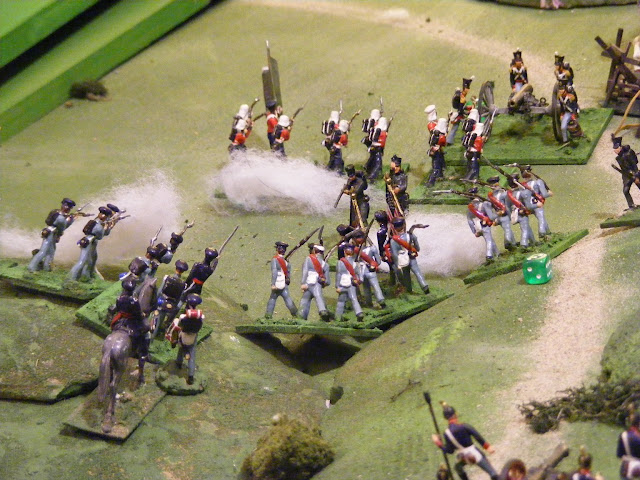 .
On the British half of the turn, the riflemen, having covered the retreat of the line infantry and now facing overwhelming odds, pulled back while the 49th rallied along side the battery. The Americans soon  followed up but a blast of cannister swept General Zinn from his horse. The attack stalled and degenerated into a firefight leaving both brigades shaken by losses. 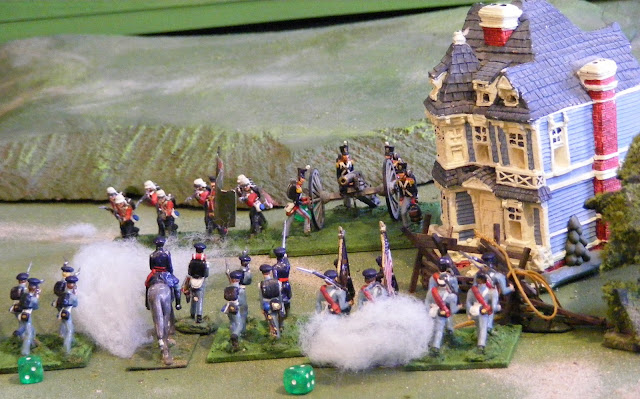 Back on the Western end of the hill, both sides deployed, the Americans covered by riflemen. The 3rd Infantry, in column were locked in melee with the Fencibles and a battery of guns. The New Yorkers moved  up and opened a long range duel with the 41st Foot. The Ohio Brigade pushed forward to support the 3rd Infantry, hoping to tip the balance. Since they were joining a continuing melee, there were no defensive benefits for the Fencibles but they didn't need them, shaken by the heavy casualties, the Ohio volunteers broke and fled back down the hill. 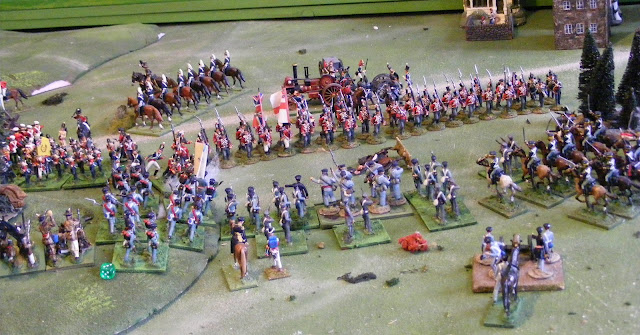 Here was the crucial moment. Trusting that the shaken American Dragoons and the thin line of riflemen were no threat, General Ross ordered the York Volunteers to pull out of the line and move to the center to join in an attack on the hill supported by the howitzer battery.  The cavalry had already been sent to sweep clear the right. The battalion of detachments, moving past the Fencibles, were ordered up the hill. On the left flank, the 41st Foot led by their Brigadier pressed forward to settle the matter, if the US 4th Brigade could be shaken and driven from the hill, the battle could yet be retrieved. 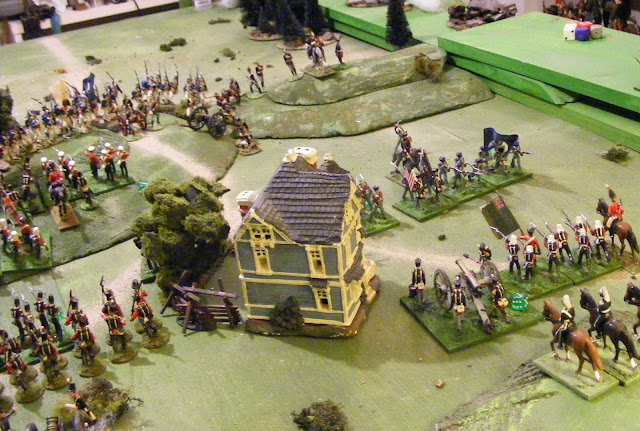 On the right, the GG Bodyguard calmly passed through the 49th and threw themselves on the enemy who calmly formed square and repulsed them, (It was here on the eastern flank that the serious issue of the day that arose, not only was the shaken brigade able to react as calmly as a fresh one, but my intent that shaken brigades be more vulnerable to losses in melee - (due to straggling etc,)  as well as being less effective, had been lost in the pre game tweaks. A calm review of the odds showed that it was highly unlikely that the cavalry would ever break the square even though it was shaken. Worse, there was almost no incentive for Generals to husband their units, the shaken batteries fired effectively as fresh ones and the units were happy to stand to the last man as speed bumps even if a charge was not a good idea. Attacking them was fairly safe but not nearly as effective a tactic as intended).
In the center, the detachments climbed the ridge slowly only to have the 4th & 7th Infantry crest the ridge. An uphill charge against twice their numbers supported by artillery looked more like suicide than courage while the American commander saw no reason to trust his fate to melee dice when he had cannister to back up his musketry. 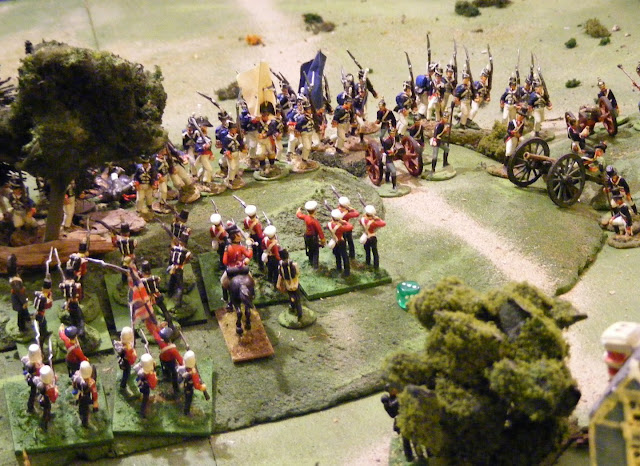 On the right, the 41st pushed through the defensive fire but were unable to drive the New Yorkers back. As the fight continued, Brigadier Brock was shot from his horse, the 41st wavered and then fell back in confusion as the New Yorkers poured in an especially hot fire. (they rolled up, the 41st rolled down) Pressing forward in pursuit, they surprised General Ross who was watching the fight in the hill. Seizing his bridle, a rifleman led him to the rear. (a general in the path of an enemy unit dices to see if he escapes or is captured) 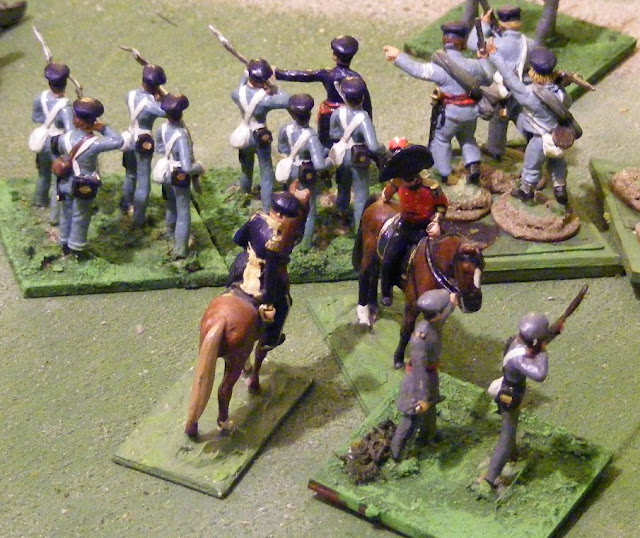 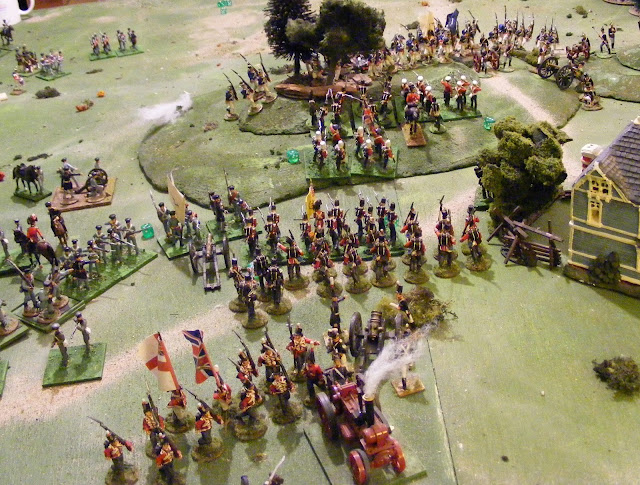 Hurriedly, the howitzers were wheeled about  while the York Volunteers, refused their flank and tried to cover the retreat of the 41st. The Fencibles, with the enemy behind them, were forced to conform to avoid being flanked. The American General knew that now was the time,  every available man was thrown against the British flank.

For a while the fight was brisk both on and behind the hill. It couldn't last however, cannister tore apart the Battalion of Detachments from the flanks as well as ahead and on the plain, numbers told. There were still a few shaken companies clinging to the hill but the British line of communication was cut and the enemy had a fresh brigade supported by 4 guns to hold the hill while the British force was only a few hits away from being  broken, Reluctantly General Ross ordered a withdrawal while he could still cover his retreat. 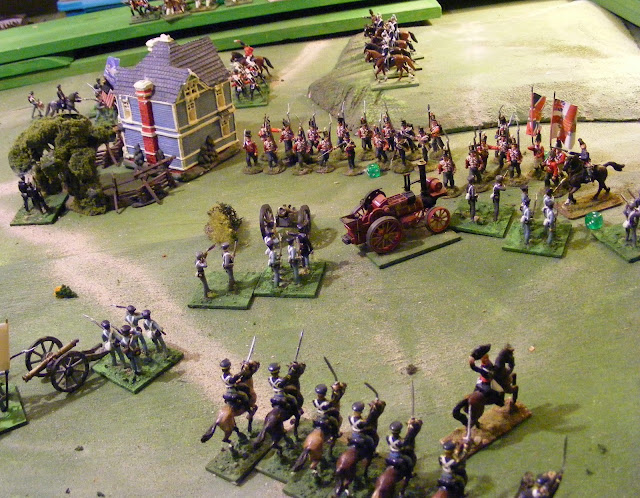 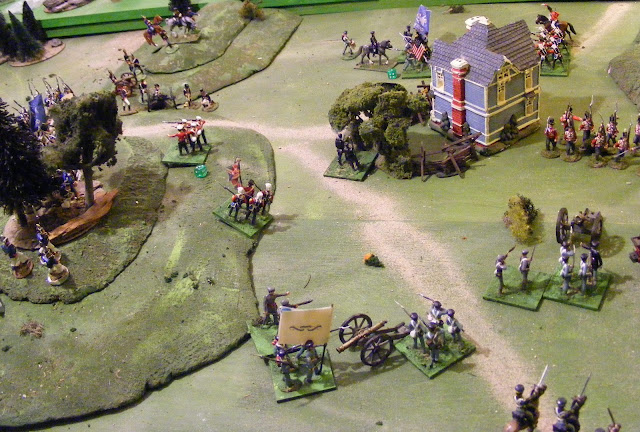