Eagle of the Ninth 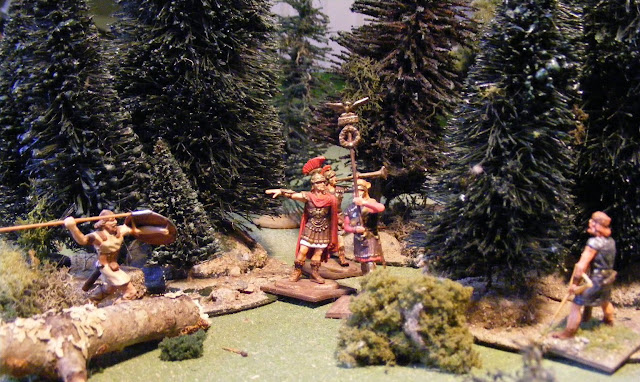 Vintage 40mm Elastolin figures.
I was introduced to Rosemary Sutcliffe's novel Eagle of the Ninth when I was in school and I became an instant lifelong fan of her books. Sword at Sunset might be evn closer to my heart and has certainly been a bigger wargaming influence but afte a dozen re-readings, the Eagle of the Ninth never fails to satisfy. It was therefore with both anticipation and anxiety that I  awaited the new film directed by Kevin MacDonald, after all, while novels often get turned into great movies, the resulting films often bare little resemblance to the original book, just look at Last of the Mohicans, 'nuff said.

Now its not possible to fit every scene and character from even a short novel like this into a 2 hour movie so I was expecting things to be condensed, characters dropped, an so forth, the key things for me are, did they keep the main characters and have them recognizable, and did they keep the main plot or storyline. On a less important note, I look to see if favorite scenes have been included. On the whole I think the answer is yes. Details were changed but the essence of the story remained.

Those changes that were made to get the story across quickly to those not familiar with the book were fine, I was somewhat less happy with changes that seem to have been made to express a slightly different view from the novel. The movie seems to be full heartedly behind redemption but in the book, between Guern the Hunter's decision to stay with his new family despite having risked all to help Marcus and Esca, and the burying of the Eagle, there is a sense that what men choose to do is important  but that you cannot change the past by what you do in the present and those actions are often best judged by intent and how they were carried out than by the results. Probably not popular themes for movie goers these days.

I'm not convinced that following the original plan of having Marcus disguised as a travelling Greek and thus able to talk to his erstwhile enemies in their own homes wouldn't have been better but I suspect that it would have needed an extra 1/2 hour of non-action at least and possible would have confused a great deal of people.

I have tried to evaluate how I would feel about the movie if I had never read the book, but its tricky and really needs another viewing or two. Was it  'GREAT"  movie destined to become a classic? No, probably not. Did I enjoy it? Yes, and so did my wife.

From an historical point of view, I'm not up on the latest accepted interpretations or the minutiae of Roman drill but the battle scene at the beginning looked and felt right.  I wasn't quite as happy with the  Caledones as Hurons even though its probably closer than how I might have pictured them. If they had just not shaved their heads.

I also liked the use of language, Welsh possibly for the southern Britons? Couldn't understand a word they said. But once we went north of the wall I was tickled pink to be able to pick up a good deal of what was being said. (not every word, I was never fluent and am getting rustier by the day, but enough)  OK so modern Scots gaelic probably isn't exactly accurate but it beat the pants off a made up language and was a nice touch.

Would I recommend this movie? Absolutely!

Am I thinking about how to make chariots for my Elastolin Picts? Maybe.

Am I going to be cheesy enough to send Prince Michael north over the Wall to rescue his great great grandfather's lost eagle? Probably not, well  not exactly but... hmmmm.......