Theory vs a Practical Base

The following discussion is based around my planning of wargame armies to use Hearts of Tin with 40mm figures, primarily for battles in North America and India during the 1st half of the 19th Century.

A 40mm 1812 Ohio Regiment based according to Morschauser's suggestion for a regiment of 30mm troops:
five 40mm square bases with 4 figures on each. These have been painted to match the table.
Since I expect to play mostly CS Grant style scenarios, I studied these and then began planning standard armies based around 8 infantry units ideally with a roughly 12"  frontage, a reflection of their Grant Wargame roots. Units of around 20 men are an old standard, Morschauser recommended regiments with 5 bases each of 4 figures and Don Featherstone used 20 men plus 2 officers. Even Lawford & Young's companies, the smallest unit that could be deployed, had a strength of 19 including the drummer. I decided I wanted to honour this tradition or at least be close. This led me to adopt a regiment with 20 figures on an 8" frontage when stood shoulder to shoulder "like the good book sez".   A few quick checks seemed to confirm that this would work with a selection of small historical battles when adapted to my 6'x8' table. Now, how to base those battalions?

If the rules count noses for combat resolution,  basing is really about ease of movement and aesthetics and there is no need for both sides to be similar but if combat is by element then varying the base size affects how the game plays. This is where it begins to really matter. It is the opposing pull of figure based games and element based games that is at the heart of my basing conflict over the last 10 years. After much heart searching, I have decided that this particular collection of figures will remain dedicated to an element based set of rules which will allow me to stage multi-battalion games on a small table. 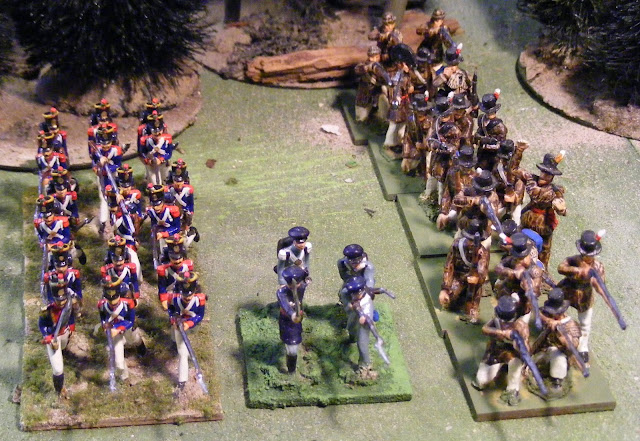 One of the problems with big figures, both the end battalions have about the right frontage when deployed in line but the single 2" base in the middle shows how much ground one of these battalions should occupy in a close column. Compare this with the columns on either side. Hmmm. Well sometimes one has to pay your money and take your choice.
I won't bother with a tedious recounting of each of the 5 systems I have experimented with over the last 3 years. Some of the base changes and the whys are documented in  past blog entries as well as in pictures both here and on my old Loch Sloy website. (Unless of course 1 or more benighted souls are silly enough to request it!)

Loose files, 4 figures on each 2" square base. What was I thinking?
The size and shape of a base and the number of figures on it and how they can be arranged all affect the look of things but with an element based game, that is not the only matter of concern. Assuming a given unit footprint, the larger the bases, the fewer can be used per unit. If the table size is reduced, the number of troops that can fit are reduced, either the units need to shrink or the number of units must be reduced. Since the number of units is dictated by the scenario or the historical battle being re-created, the unit footprint must shrink.

Elements with 4 figures on a 60mm x 50mm base confront elements with 2 figures on a 2" sq base. En masse both are ok, but if there was just a single element detachment?
I have been working from an unproven assumption that more bases is better. More elements per game  means more dice, more predictable combat results, more hits that can be sustained per unit and thus longer games.  I'm no longer sure that these things make for a better game. With fewer elements, almost every die roll means something and changes of fortune can be sudden, heightening tension. Games will also end sooner since fewer losses can be sustained. Many games can be played in 2 to 3 hours with larger or more complex ones being feasible in 4-5 hours. The time was when I expected a good game to be an all day affair but now 3 hours  is about my ideal for an average game and also a time span I can find fairly easily, especially if a 2nd player is involved. longer games are more difficult for reasons that have nothing to do with gaming.

My original Morschuser Meets Macduff/Hearts of Tin unit configuration, 3 60mm bases with 6 figures on each. Tried out here by my newly painted Mexicans.
So what are the conclusions that I have reached?  Given my planned table size, the desirability for an element game of having infantry and cavalry elements fitting on a common element frontage, the look of  the figures on a base, especially for 1 stand detachments, and the desirability of a cross project standard for building terrain,  (my 16thC figures are based on 60mm square bases)  I have decided that I was right 4 years ago when I bought a big bag of 60mm wide bases from Litko. Luckily I didn't scrap them when I started to experiment! 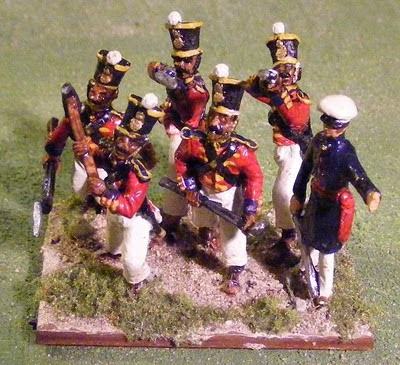 On to the future, the freshly painted Bombay Sapper and Miners prepare the road to Afghanistan, Scinde, Gwalior and the Punjaub. (Sash & Saber Alamo Mexican sappers slightly converted and led by one of my own British officers. )