I set up and played Crysler's Farm today. The report is not quite done and I'm about to trundle off to bed so it'll be up tomorrow.  After the last 2 HofT games, I still had some uneasyness about the Shaken rules and winning and losing conditions from a gaming point of view. On top of that, I've been having an e-discussion about the affect on individual units when a brigade becomes shaken, different issues from mine but  grist for the thought mill.

Crsyler's Farm is a small battle, which means that not only are the numbers of dice small enough to allow for extreme dice effects but by the end of the day, the table was looking a little bare even thoguh the game wasn't over yet. The effect was heightened since I had fielded 4 single figures per line company and marked hits by removing figures. This means a single figure might be left representing his company. A base with 6 20mm figures and 3 hit markers would have looked much less forlorn. 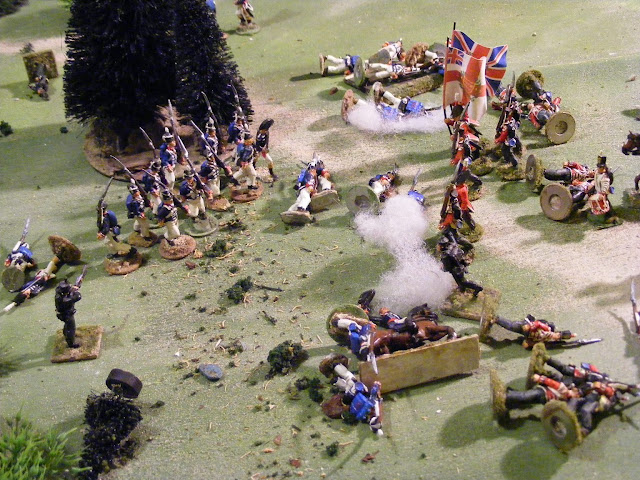 The original Morschauser rules are very bloody. A Horse & Musket company or stand (Basic Unit) is destroyed when it takes a hit and melees are only resolved when 1 side is destroyed. Rosters allow a stand to take more hits from shooting but melee is still to the death. One of the first things I changed was to allow units to retreat from melee and to allow hits to be rallied off. I also allowed units to share hits amongst companies. This worked great and had just the sort of effect I wanted, units could fight on and take a lot of hits bit hang together until they reached the tipping point at which point they disintegrated rapidly. Commander's would try to pull badly battered units out of the line to try to rally them. There were only 2 problems,  a 5 stand unit might need as many as 12 casualty markers which was either unsightly or hard to track if trailing the unit, (when trying to use single figures it was even more confusing unless one dragged the bodies along)   and, the games dragged on forever unless there was a turn limit which always seemed to leave someone convinced that if they had had just one more turn...... .

The solution to this was in part to make it easier to remove stands but allow units to fight on. This has run afoul of the shaken rules and looks odd on the table. In short I haven't really digested what it means and what I can live with. My reaction so far has been to drastically reduce what a unit in a shaken brigade can do and find ways to remove them all together. This hasn't felt right in a couple of situations and worse doesn't seem to be solving the issue either.

There is also the double jeopardy issue again. Hits are supposed to represent a loss of morale, cohesion and effectiveness as well as physical losses and straggling, but, with shaken units, I am also heaping additional penalties. To be consistent, teh main penalty should be increased losses. The reduced combat effectiveness would be better served if I left all the stands of a unit on the table so that a collection of remnants could not be as strong as a fresh unit but then I'm back to al those markers or replacement bases..

Time to summarize the Desired State:

a) Armies should not fight to the last man
b) Armies and parts of armies have, for want of a better term, a Tipping Point. Up to that point they are willing to take losses but beyond they lose the will to fight. Its not just losses but also situation or stress induced. (This can mean panic and routs in life but as long as stands come off I don;t care what its called in game terms).
c) Shooting at shaken units should be less effective than attacking them
d) The solution should reflect the Brigadier's decisions as well as a loss of cohesion amongst the troops.
e) whatever mechanisms are used must be simple, not admin heavy, clean on the table.

Ideally the solution should also "look" right but I think I can be happy if it is consistent with the rules. There is always the option of leaving "dead" stands on the table or using place holders.

Oh, and the solution must not involve major changes as I'm generally happy with how things work.

At the moment, I'm contemplating 2 changes, one is to remove the melee target restrictions that force units to split their hits if facing multiple enemy units and instead will allow them to concentrate so that a mixed unit is not stronger than a pure one of the same size.  The second is to lift the no shooting and no attack restirctions with a "no move towards the enemy" restriction which will allow remnants to defend them selves other than in melee. the 3rd is to replace the autobreak if defeated in melee with a straggler roll. Lastly will be to replace the current bonus for attacking shaken units with double casualties for shaken units to encourage players to protect them and to reflect increased straggling.

The new army morale rule needs to be adjusted, I'm just not sure how. Counting stands not units would work best but is too much like a computer's job.