Honey, I shrank the game 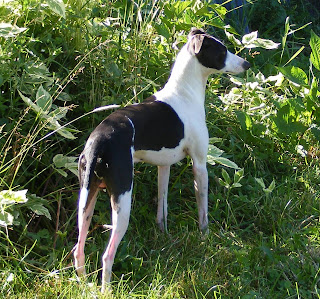 Travis (William B unofficially, Ch. Grayson's I'm Your Man Kabecca officially). Seven generations on from Kathy's original hound, Jack (Am. Can, Ch. Chipwill's Great Expectaions).
It was Jack who first discovered my potential as a water boy and doorman.


I have drawn dog, cat, bunny, bird and granny sitting duties again this weekend. On the downside this means no block of free time longer than 3 hours, no travelling in to town for a game and so forth but on the upside, no renovations while I'm on my own so the plumbing of my wife's new grooming shop can wait and I should be able to manage several blocks of guilt free hobby time in addition to  DVD time with the Iggy's in the evening. (Iggy = Italian Greyhound) 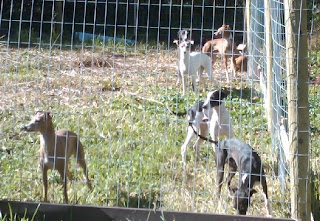 Some of the pack of Iggys enjoying the sun last fall.  It was one of this breed that was known to ride with Frederick the Great, tucked under his cloak.  The legs fold up nicely allowing them to cuddle under blankets while pumping out body heat, one of their main functions in past centuries, sort of a precursor to hot water bottles and heating pads.

This should be a perfect opportunity to test out Bob Cordery's 20thC portable wargame, I may even set up a card table down in the family room if I spend too much of the quiet time on rearranging my room, painting miniatures and making terrain.

My original plan was just to test out the 20thC version with my 1/72nd Russian Civil War troops and I still intend to do this, but 2 other options have cropped up spontaneously and refused to be dismissed so I intend to play at least 3 different games.


The first variant to rear its head was the result of testing my 40mm troops on the table. It  happened that I had just finished rebasing some 1812 troops (The US forces having had a reprieve when I remembered that I had built them using my own, smaller toy soldier-ish heads) and decided to see how they fit on the grid. It struck me that one could use the framework to design a series of stylized games based on historical War of 1812 battles. (Why? I'm not sure, do I really need a reason?) It wasn't long before I was shrinking Crysler's Farm again, this time onto an 8x8 grid of 3" squares and laying out troops, 8 British vs 12 American.  This doesn't seem to be exactly what Bob was aiming for but its not far off and based on a quick trial the idea has promise. It just needs a few tweaks to adjust the game to the period and purpose.

It was while I was clearing away the Crsyler's Farm game that I opened another box to put away some other items that had been used as props in a photo and another Farm came to mind. One from just before the Great War, when wars were smaller. I'll leave it there but I hope it will an enjoyable surprise.