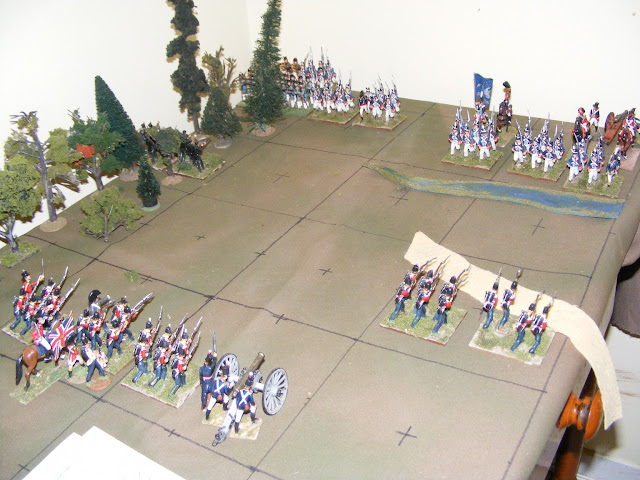 The final game of this "Cold Wars at Home" weekend (actually a co-incidence but the last Cold Wars that I missed was 1999 and I did miss it) was the mini version of Crysler's Farm which was actually played Saturday night. When I wrote the rule amendments for Bob's 20thC game, I thought I would be using a 4" grid with 2x2" square bases of troops for each unit. When I ended up playing on the 3" grid, I had to cut it to a single stand per unit. I could have marked hits and still used the roster idea but I decided to try it in basic 1 unit per square mode. It was while deploying the troops and comparing it to my map that the 7th & 8 grid rows re-appeared from an alternate reality, so this game used all 64 squares unlike the RCW games.

In order to fit the 12 unit format (I see no reason why this can't  be adjusted  but it has implications for board size, command elements and more so one thing at a time), I started with the larger force. Allowing for a commander, a unit of cavalry and artillery, I had 9 units available for the 8 US regiments present. These varied in size but many were severely understrength. Nine stands  worked out to roughly an average of 200 men per stand. (This is about 1/2 the amount suggested by the ground scale but I didn't want to play with 7 units vs 4.)  Since the majority of American guns arrived  during the battle, I started them off board, allowing the US commander to activate them on turn 2 or any later turn. Since the American attacks seem to have been poorly co-ordinated and conducted with almost no input from the acting general, I contemplated just not fielding one but instead ruled that  he was not allowed to join any units and that the American player would roll 1 activation dice less than he was normally allowed.

Applying the same troop ratio to the British but halving it for the light units I got 2 stands for each of the 49th & 89th regiments plus a stand for the advanced guard and 2 stands of light infantry. I decided that a single gun would be about right for the combined effect  of the gunboats and artillery.

I deployed the troops and started in.

The first turn was uneventful but in Turn 2, Colonel Morrison led the 49th in an attack on the ragged American line. With a plus for veteran and another for an attached general it seemed like a bold move. Something General Brock might have approved of. Yes, the attack was repulsed meaning the good Col was shot down at the head of his men. 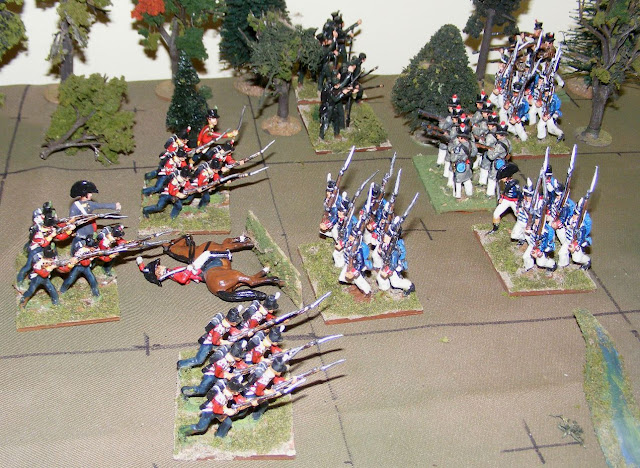 The fighting continued on a sporadic basis with the US left wing struggling to cross the gully which I treated like a stream while the right was making poor headway in the woods despite knocking out 1 light infantryman.
Undaunted by the loss of their leader though struggling to roll enough activation points, the British advanced to exploit the gap in the US line. They managed a 2:1 against the end of the line and on the next turn attacked an defeated a unit stuck in the gully. In the woods, the light infantry continued to hold. 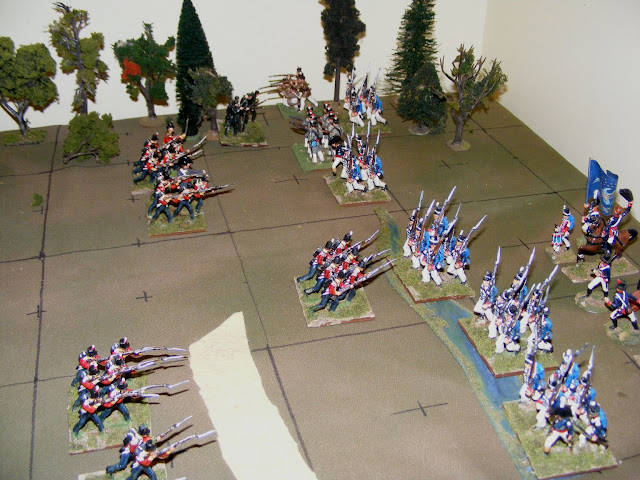 Finally the US player brought up his gun and cannister started taking its toll. On the other side shooting by the light infantry and British artillery were also taking a heavy toll. By the time the artillery ceased fire on turn 8, all the US infantry was gone. The last hope was for a gallant cavalry charge to sweep the field. It almost worked, the dragoons rode down 1 unit and then were attacked at 2:1 but rode down one of their attackers. That was the end of  it though, on their next attack, they were shot down by the Fencibles, these and the Voltigeurs were the last infantry units on the field. 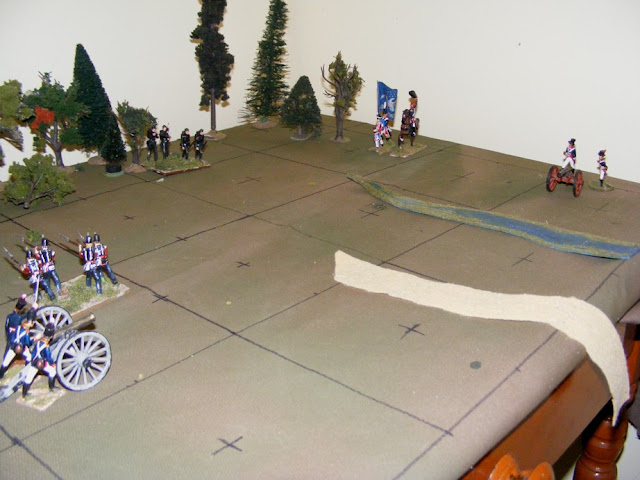 This wasn't a bad game but it didn't compare well with the HofT version I had played in February. I've been struggling to put my finger on the issues (apart from the obvious one).

One issue has popped up before, the fight to the last man syndrome. In the RCW game, the game conditions gave players had an incentive to not fight to the last man in the 1st game, in this case there was none.  Once again a scenario or victory condition rule could have been used to handle this but possibly the proposed roster system would also help somewhat as the activation dice quotas would give players an incentive to retire weakened units before they are destroyed and make it foolhardy to attack full strength units with understrength ones.

Another issue with the game was the feel of not having long range shooting or close combat options for line infantry, especially if playing skirmishes.

I like the way that the 1 square moves work for infantry, making it hard to maneuver. It makes it impassible to move through another unit which is questionable but one could allow 2 adjacent units to swap places. (in other words have them move simultaneously)

So where would that leave light infantry? I don't want to ban line infantry from entering woods so perhaps combat and cover modifiers will be sufficient as well as a longer move, possibly even a fire and move option.

At any rate, since Hook's Farm was still set up, I decided to try out the 6" squares with 3 stand units. (smaller squares with smaller figures would also work or smaller bases, say 2 figures each) 1 combat die per stand, 1 hit destroys 1 stand. Hook's Farm, Oregon Territory. After 4 turns, it seems to be working well. 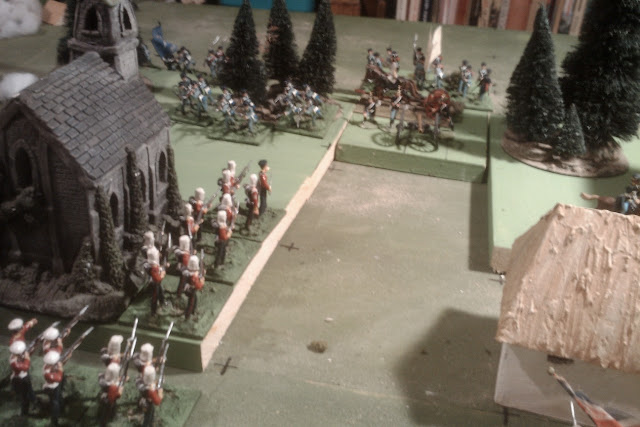