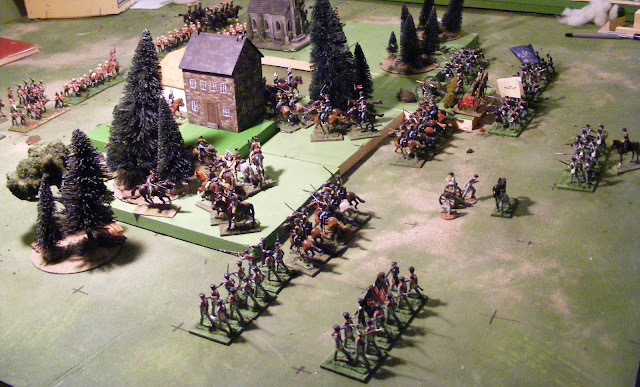 Hook's Farm, Oregon. The 40mm armies give the 6" grid a go last week. I liked it but the big grid and the linear units sometimes felt odd.


Note: This is the 1st rough synthesis of Hearts of Tin with my modified version of Bob Cordery's Chess board game inspired by Joe Morschauser. I have skipped most of the definitions, format and finer details to get a version ready to test on Sunday. If it goes well, it will be converted to a word document and eventually all the various bits of Hearts of Tin, engineering, hospitals, balloons etc will be incorporated.

After some experimentation, I am starting with the ungridded version designed for my planned units of 3 stands totalling 18 inf (16 privates, officer&nco) or 9 cavalry (officer and 8 troopers), or 2 guns with crews.

All measurements will be in even multiples of 3" and I'll worry about fitting to a grid later. (once I sort out grid size, the leaning is towards a small grid with 1 stand/company per square and saving the 6" grid for the 54mm  toy soldiers using Bob's late 19thC rules )
Without the grid options are measure in cm or sort it yourself.

After some thought, I have decided to be consistent with my other rules and invert the melee values so that high is better.

These are the rules being tested out this afternoon. 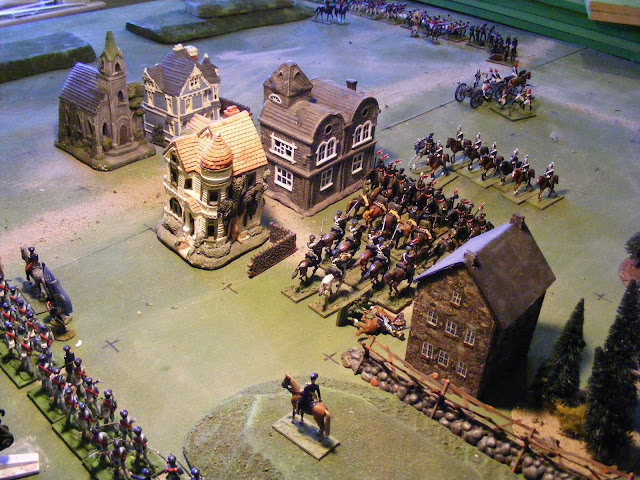 The rules may change but the war in Oregon continues, grid free this time around.

****** The current version of the rules is available here. ****
1. Generals. Each army normally has 1 General who commands everyone. There will usually be subordinate generals called Brigadiers who only affect their own troops.

Addition troop types can be added by defining their movement, melee value, weapons range and any special characteristics.

3. Formations. Units may be in 1 of 2 formations: These may be shown by arranging stands or placing a marker on marching units.
a) Marching  A narrow column .
b) Deployed. Normally deployed units are assumed to choose an appropriate formation but there are special rules for infantry in square.


6. Activation. Each General and Brigadier rolls 1d6 for how many units he may activate that turn. A brigadier may only use his points on units under his command. The General may use the points on any unit.


8. Actions.  When activated a unit may do one of: move, shoot, attack, rally, form sq (line inf only). (note that there are not separate movement and small arms fire phases)

9. Movement. A unit may move its full distance in any direction and may end the move facing as required.
See rule 3 on measuring. A unit which uses road movement must end the turn in march formation, there is no other penalty for changing formation. (a unit which moves in march formation can be given a 2nd activation and can use this to move and deploy as long as it is not using road movement)

11. Attacking. An attack is a move to a position within 6" of the enemy (see 3. Measuring)  Artillery, squares,  units in march formations and detachments may not attack. A unit that attacks must have the enemy within its front when it begins the attack and after it moves. If it began to the front of the unit being attacked then it must attack the enemy front.  A unit which attacks must resolve melee. If a unit begins its move within 6" of an enemy but not facing it then it may be activated and turn and attack it, may move away or may ignore it.

12. Shooting. Roll 1 die per stand shooting if the unit has an enemy within its front arc and within reach. Units in march formation or square cannot shoot.
Score to hit:

All fire requires a clear line of sight to the target. This extends into but not through cover, hills etc. Rockets and mortars use indirect fire instead. They may shoot at targets they cannot see but must roll a scatter die and  shiftt the target 6" for mortars, 12" for rockets in the direction of the arrow. (Treating bulls eye as a hit). If there are units of either side in the grid square or hex that is indicated then roll against it for hits. If no scatter die is available then roll 1 die for accuracy with 5 or 6 being required to hit, If it misses then spin a pencil to choose the distance that it deviates in.


Reaction. At the start of the melee phase a unit which is being attacked, may respond by doing ONE of the following : (no activation pts are required)


Melee Resolution. Units in close combat roll 1 die per stand if there is an enemy within 6" to their front. For each score which is equal to or more than their Melee value  1 hit is inflicted on the enemy.

If the defender is able to claim defensive fire, he rolls his dice first then applies the hit. If the attacking unit survives, it now rolls its dice. In all other cases both sides roll simultaneously


Units in march formation only roll 1 die.
If, after all close combat rolls have been made, there are still units surviving on both sides then the side that took the most number of hits must retreat a normal move. Tey may pass through friends. If the same number of hits were suffered on both sides then the attacker n=must retreat,
If the enemy retreats, cavalry, irregular cavalry and infantry that charged with cold steel may advance a move and may attack again immediately.


Modifiers.  All modifiers are to a unit's die roll. A roll of 1 always misses, a 6 always hits

It is best to use some form of marker for hits.

15. Rallying. During the movement phase, a unit which is activated and does not move or shoot may remove 1 hit. Lost stands may not be recovered.

17. Generals.
Generals do not count as a unit. They may be represented by a single officer figure, usually mounted on a horse or by such a figure plus an ensign with a flag. If a General is touching one of his units then he is attached otherwise he is not attached.

If a General is attached to a unit which is engaged in melee then he rolls 1 die. If that die comes up a 1 then he is wounded and removed from play.


If a General is attached to a unit which takes one or more hits from shooting then roll an extra die and if that die scores 1 then he has been wounded and is removed from play.

A General who is not attached may not be shot at. If a General who is not attached to a unit moves within 6" of the front of an enemy unit  or an enemy unit moves so that its front comes within 6" then both sides roll a die and if the General's die is lower then he is immediately captured and removed from the game, if his score is equal to or higher then he moves away up to 1 full move.

Towns & Forts.  Only infantry and light infantry may deploy in a town. Artillery and infantry may deploy in a fort. A town provides cover against shooting and blocks line of sight. Units attacking a town or fort are penalized. It costs an extra activation point for infantry/artillery to enter and deploy in or to leave a town/fort except by road in march formation.
Woods. Artillery, cavalry, and wagons may not enter woods unless marching along a road. It costs an extra activation point to move line infantry into or through woods. There is no penalty for light infantry in woods.

Hills. 1 contour or shallow hills do not slow movement, 2 contour or steep slopes do not affect light infantry but cost 2 activation points per other units to move up or down unless following a road. A unit suffers a penalty when attacking uphill

Rivers. A unit must stop when it enters a fordable river unless following a road. It may move normally on the next turn.  A unit which is in a river is penalized in melee 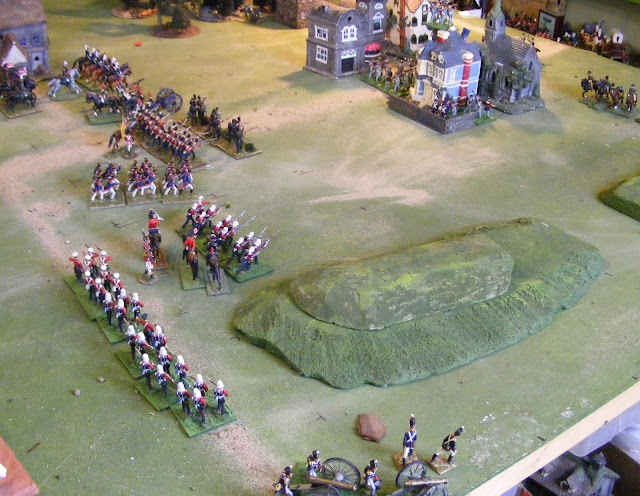 Yes, that is a sawmill off to the left of this chance encounter.
Posted by Ross Mac rmacfa@gmail.com

Email ThisBlogThis!Share to TwitterShare to FacebookShare to Pinterest
Labels: grid