Minifig S range hand gunners with a Hinchliffe gun and crew. Painted c 1976.
If I hadn't already pulled some of these figures out, I probably would have put HOTT out of my mind for now but since there they were, I figured I might as well get them organized. Then of course, I figured I might as well base them before I forgot what I was planning....... 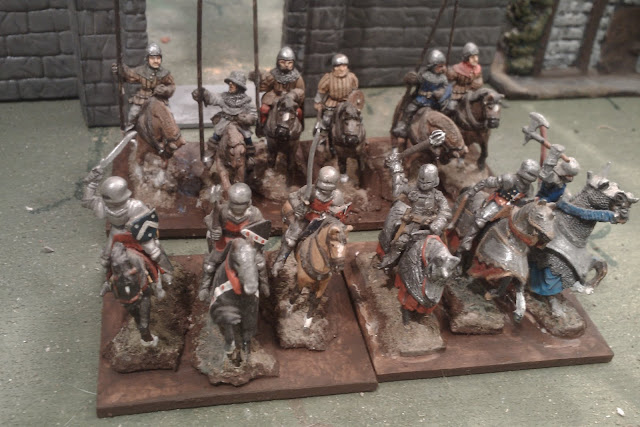 Minifig & Heritage Knights (c1976) with Revenge men-at-arms behind them (c1996)
Battle hardened mercenaries I think.
Since the figures that were out consisted of various medieval human types, and without having a context, I started with the  assumption that this was a "good" army despite the profusion of hand guns and cannon. One of the groups temporarily stumped me though, a nobleman in his robes with an entourage with torch bearers and herald. This was originally painted c 1976 partly as a representation of a retired D&D character, and partly in homage to the Black Arrow.

What could his role be? At first I thought perhaps his slightly clerical nature might allow him to stand as a Cleric (sic)  but he just wouldn't look right in the battle line in silks and ermines. It then occured to me that he might be more of a Merchant, a true "Wizard of the Accounts". Not only a merchant, but a wealthy Magistrate, effective ruler of a City of Merchants.

Ahhh, now this was starting to come together. Suddenly a world starts to emerge from the Mists of the Mind. One land, four people. 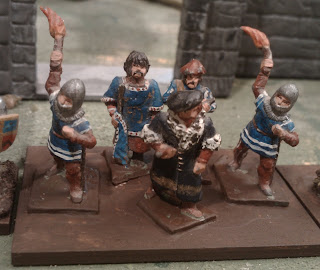 Magistrate Robert, The Doge of Mount Regal.
By now the army already had more than enough points for a basic army and thus scope for flexibility on troop choice, but there were still a few figures that I wanted in this army and I had an uneven point total due to the artillery piece. What I wanted was a mob or rather "horde" of citizen's   but I had nothing suitable to hand. I did have some pillagers and so a stand of Lurker's was added. Last but not least were the dismounted equivalent of the Minifig WotR knights. These could easily be used as a Blade alternative to a stand of Knights but I still had the Clerical thought in my mind. These aren;t exactly compatible with a Wizard General but they could be a useful alternative. Since the Doge uses the magic of money to influence and distract troops, perhaps auditors who can keep accounts on the straight and narrow would be a natural counter-balance. Thus was born the Society of Auditors led by the Auditor-General. 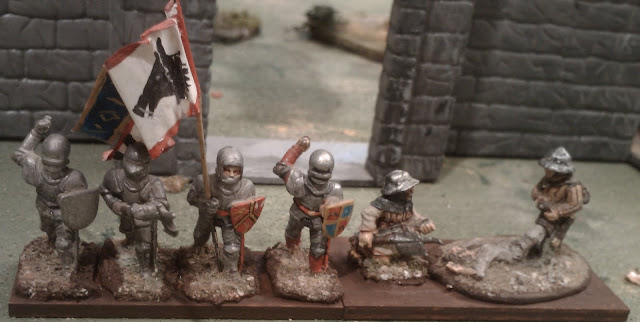 Minifg Knights (c 1976) and Revenge Looters (c 1996)
The first army stands ready. Well, almost ready,  I put them all on new bases for consistency but only painted them brown for now. I am toying with the idea of doing the bases as flag stones or cobblestones even though any actual fighting would usually take place on the fields outside the city.
The list then consists of 1 Wizard (the Doge) or 1 Cleric (The Accountant General), 2 knights, 2 riders, 4 shooters, 3 blades, 1 artillery, 1 lurker. A total of 33 points to choose from. Normally either the Doge or the Auditor General will be fielded, not both and normally one or the other must be in charge. 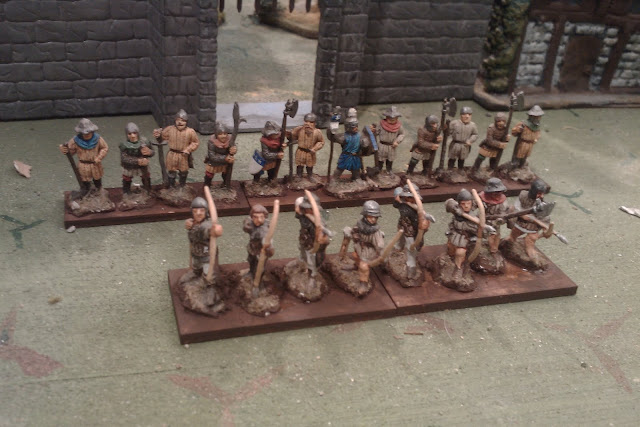 The City Militia. Citadel (possibly?) Halbardiers behind (c1982) with Revenge archers (c 1996)
Now which army is next? The men of the Mountains will come from my Scots, the Sea from the 6thC Saxon-Irish mercenaries/pirates from my Dark Age armies long with some Prince August figures. The folk from the woods will no doubt have a Celtic air about them but I do have some bears and things around here somewhere. Oh and look, a character I bought about 25 years ago and haven't yet painted, someone very powerful but you don't know when or if he will come or how long he will stay, or even WHO he really is. Sounds like a DBA God to me, although I suppose one could argue for an Aerial magician except that he's not given to harming people but can turn the tables and get by anyone so perhaps  just a Sneaker. 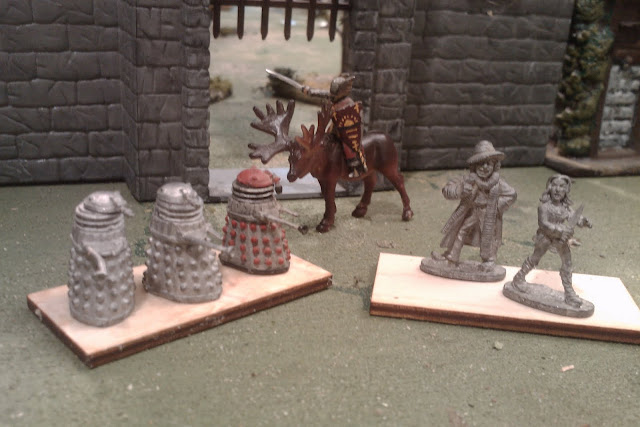 Source material from the back of the closet. Would Saxon or Viking raiders made an alliance with the Dalaks?
Posted by Ross Mac rmacfa@gmail.com