Dispatch from the Front

The first play test, involving Farway and Oberhilse forces in the years just before the adoption of drab uniforms, was a success!  At first it seemed odd to be using open order tactics and modern rifles with colourful uniforms but of course magazine rifles and machine guns were adopted into European armies long before drab uniforms came in.

I was interested to see that the rules seemed to fit quite comfortably but then remembered that the original rules were written for Victorian Colonial wargames. The musket era adaptation came later. I was also interested to see that removal of 2 of the key concepts: variable length movement and the ability to recover strength improved the feel rather than detracting from it. 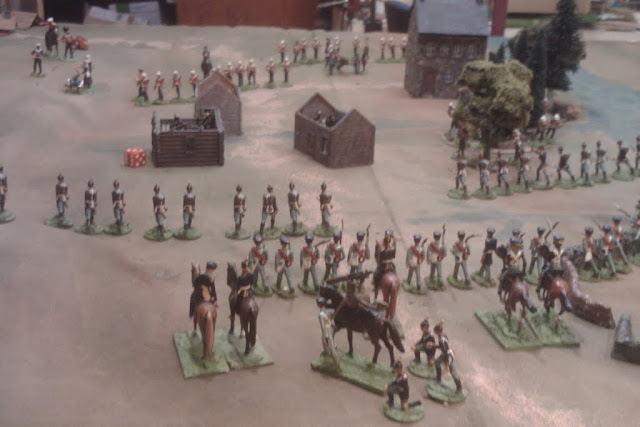 The game, of course, was a version of Sawmill Village. Each side fielded 4 companies of 12 infantry, a troop of 6 cavalry, a field gun and an MG. In brief, the Oberhilse cavalry forged ahead and seized the village but failed an Orders check, charged the Faraway cavalry and was driven back. The Victoria Rifles were able to move up and seize the village but were thrown out of 1 building by a company of Blue Guard, A 1st counter by the Buffs faltered but a second one recaptured it. An attempt by a Blue company to cross an open spot in the woods and outflank the town was stopped by Red's infantry in the woods.


On the left flank, a column of infantry was caught by Larsen's Lancers before it could deploy (failed Orders check) and was sent reeling, their retreat being coverd by the MG which was over run but held the cavalry just long enough. It was the turn of  the Lancers to launch a charge against orders and suffer the penalty when they were hit by rifle fire when trying to sneak past a deployed company of  infantry to over run a limbered battery which was just moving up.


Attempts by Blue's center to muster another attack on the town  kept faltering, occasionally due to fire but mostly due to poor orders dice. Not surprisingly, the resulting fire fight with an equal number of enemy in cover resulted in Blue being repulsed, causing the whole Blue army to retire. 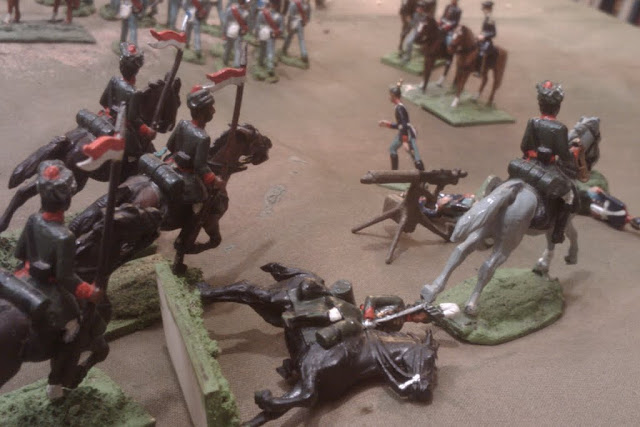 I'm feeling  a bit ambivalent about the Orders checks. 1 detachment of rifles, having lost its officer, needed 3 or better to rally but rolled 5 1's in a row and Blue suffered disastrous freezes 4 or 5 times, in each case needing 2 or better to pass. Not having kept records, I'm not sure if there were an unlikely number of 1's or if it just felt like it, particularly as they seem to have been inflicted on Blue in droves, usually at critical times (like trying to deploy out of march column before an unexpected cavalry charge).   On the other hand, several of the events were quite reasonable if frustrating. The question is not whether or not to have some unpredictability and friction, but how much. The cavalry charge for example, would have worked as well if the Red Card was pulled first. having the Black card be pulled first but then be a non-event smacked of double jeopardy. It may be that a minor tweak and a stiff upper lip will suffice. After all the control chart was a major feature of the original rules.

I also need to think a bit about organization and how it fits typical Table Top Teasers and my table top and preferred figure size. 12 figures was just too clumsy and once around any terrain, units tended to break into 2 x 6 man detachments. I suspect that my old 8 man organization will work best with 4 of them forming a battalion and 2 being counted as 1 scenario "unit".

Last but not least I need to think a bit about Orders. Part of me would like to see each battalion have a written game order but in small games, 1 side might only have 1 or 2 battalions plus a few supporting units. it may be that the Orders check if properly tweaked, will suffice to discourage players from dispatching companies to do strange things on the other side of the table.

A test of the new organization and a few other tweaks is planned for tomorrow and work will also start on writing up the rules properly. The prospect suddenly looms ahead of me of having  a series of armies covering 100 years of Atlantica history with units slowly being replaced as styles and weapons change from smooth bore rifles through to magazine rifles, machine guns and early AFV's. All using the same terrain and support units, wagons, boats etc. Scary, very scary.
Posted by Ross Mac rmacfa@gmail.com