A Small Relief or Its All About Shoes 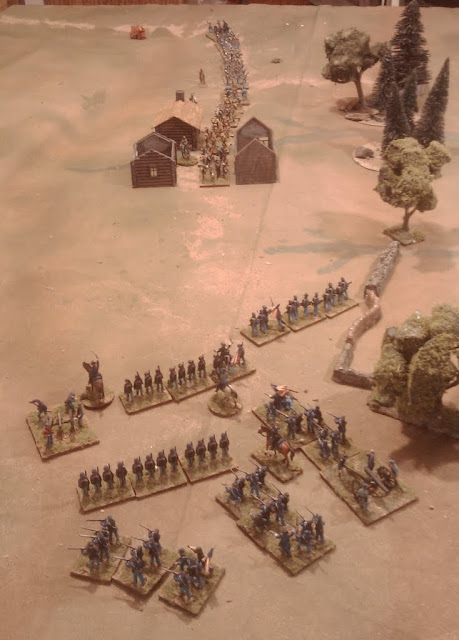 The Federal forces deploy for a piecemeal attack of Sawmill Village.

Shoes? Yes as in "If the shoe fits", though there may have been a stack of shoes in Sawmill Village, it would explain its importance anyway. One needs a good match of figures, rules and intent. It was a relief to try out the restored Hearts of Tin with my 1/72nd ACW troops and find that it all worked for me again. Playing one small game left me wanting to do another, bigger one.

There is very little to any particular unit's activity in the game but it was quickly obvious, painfully obvious, that having lost the race to grab the strategic objective, the Union commander had no plan and was just throwing units forward as and when they appeared, without even the hutzpah to throw them into a close assault before the enemy could consolidate. After a period of trying of vainly trying to out shoot troops in cover without even a numerical advantage, the Union finally started to use their artillery and organize some co-ordinated assaults which worked much better but early losses told and a counter attack.threw them back. A small game resolved in an hour.

Now to fit another 100 or so ACW figures into my over long painting queue.