Ahhh Yaass, yas, The Affair at Lawford's Bridge, down there by Young's Farm, I remember it well. I had retired and they called me back from my farm for that one you know. Dare say they couldn't trust the little fellows they depend on these days to deal with that rascal Cornville. Now there's some that look down him, say his morals are a little too Plastic. They call him a Marxist, and say he follows that Louis fellow. They would have had me holler Charge! at the sight of him. But they have also been known to say  that this old soldier has a leaden foot but I have a Heart of Tin under this Red coat and I knew just how to deal with that Blue fellow.

As I recall, Blue's little raid caught us all by surprise, why the Queen had to send her Guards out to deal with the fellows. The Guards , Black Watch Highlanders, 2 squadrons of Hussars and a pair of guns, a force to see off any enemy, let alone that Blue rabble. They had 3 regiments to my 2, as many guns and his squadrons were half again as large as ours. (ed: The General's memory may be misleading, the enemy regiments were only 8 or 12 men instead of 20 and the squadrons were 8 instead of 6. He has also neglected the presence of the Guards Band on one side and a field hospital on the other.) 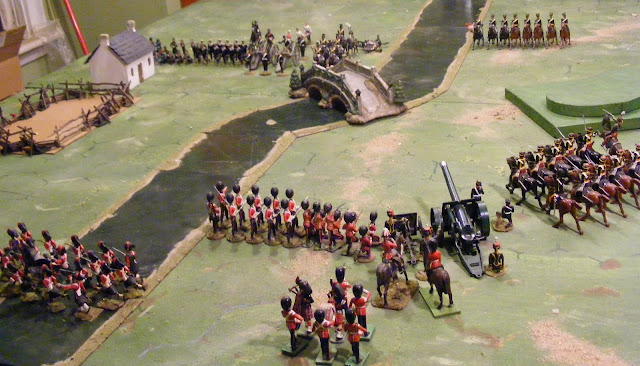 As we neared the bridge, I caught sight of the enemy on the far bank. I could see that there was no room for all our men on this side so I sent the Highlanders across the Hard River with orders to push on, save Young's Farm if they could and secure the West end of the bridge. I led the rest of the force up the East bank, keeping the Hussars under the cover of the hill. Old Cornville came on in his usual impetuous style, splitting his force right away, sending his Light Dragoons across the river while  the Lancers galloped  straight forward.  I swiftly unlimbered my guns and opened fire. 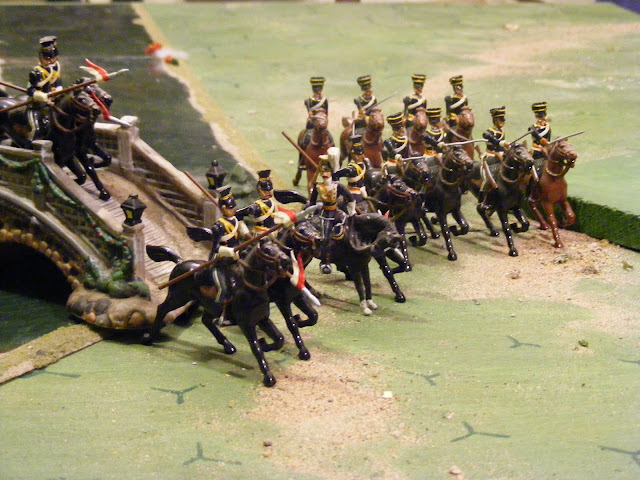 The enemy looked pretty pleased with themselves when their cavalry reformed on our side of the bridge but  in a few minutes our guns sent them galloping back over, faster than they came. Seeing the effect our guns had, seems to have given the enemy some ideas and the poor Highlanders had some hot work getting over the river. 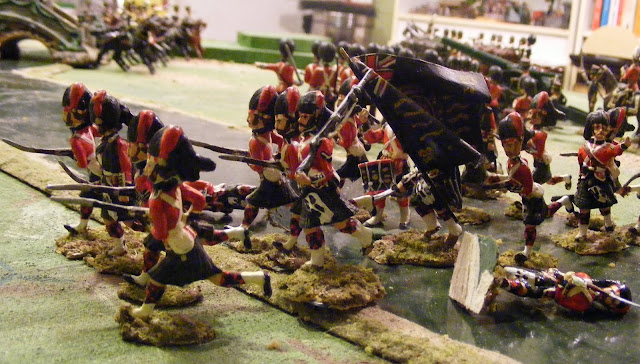 It is deuced hard at times, when you're in command. Your natural instinct is to go for the enemy but the responsibility is on your shoulders, to achieve the mission and preserve the army. So there are times when caution is called for.  We had driven back Cornville's first attempt to capture the bridge and I knew that all I had to do  was block our end and he was stymied. It was work for the guns now.

You can't ask for men steadier under fire than those Guards. Britain's all, even if some of the younger ones were born on this side of the water, they were cast in the mold of their forefathers. Still, no need in having such brave soldiers shot down without reply and besides, I could see the Lancers rallying beyond the bridge, slowly building up for a another go. Doesn't do to take the pressure off the enemy so I ordered the whole line forward into rifle range and sent the Hussars forward to keep those pesky Dragoons away from the guns. 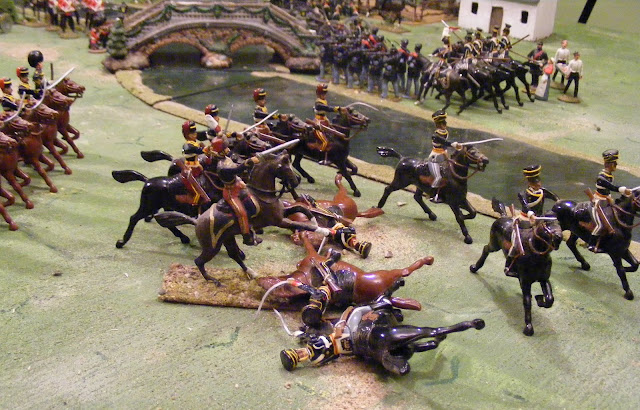 I'm not sure if its the spirited horses or the fancy uniforms but its hard to get cavalry to do anything in a quiet, controlled  manner. Since they  swept the bank clear of the enemy I suppose I can't really complain but  they did get a little carried away and without orders from me, the Cherry Bums galloped off across the river. Mind you if they'd been close enough for me to send them an order, I might just have sent them over anyway.

The Black Watch did just as well, driving off the enemy's naval brigade. Well, the enemy does seem to be  a little short of real soldiers don't they? Brave ones they have, but a bit raggle taggle when it comes to it don't you think? I think it was having Cornville fall at their head that really took the starch out of 'em though. Anyway, I ordered  Major Stuart to turn his guns on the enemy's guns, especially that 4.7". In no time at all, what was left of them were limbered up and scurrying for cover. 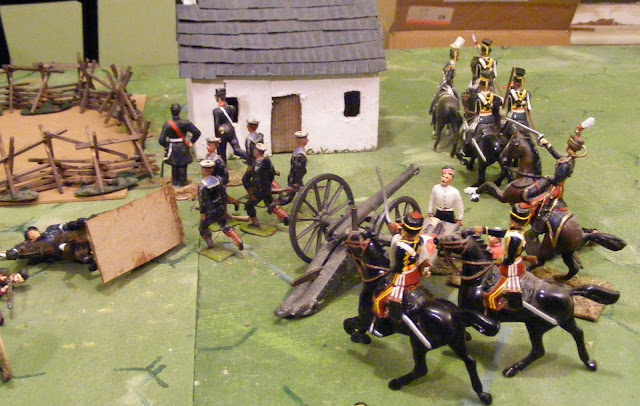 Welllll it was really all over then. The Hussars, coming up the West bank into the enemy's rear, ran over the retreating guns, scattered the sailors and caught the Lancers in the rear just as they were preparing to charge over the bridge into our guns which were on their own at the moment. The Guards, you see, had suffered so many losses from the enemy guns that I had had to pull them back and give them a little pep talk, "What would Her Majesty say?" and "How would it look in the papers?". That sort of thing. Stiffened 'em  up right away and they were ready to get back into the fray.  But the enemy had had enough. No need to be uncivilized. I let 'em go with a stern warning that they could expect more of the same if they returned. 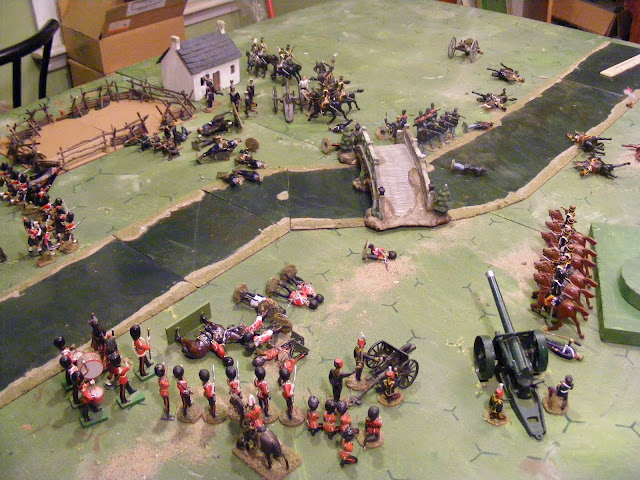 Yes that little action earned my my title of Lord Belmont don't you know? But did I ever tell you the tale of.........