If at first you don't succeed, or "Git around behint 'em". 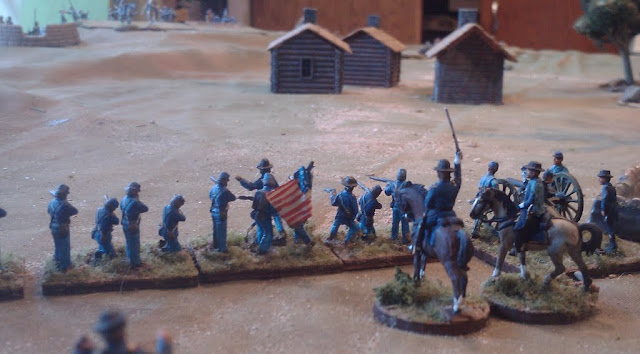 Well there I was, I wanted to try an 1840 MacDuff game on my flat hills but I also wanted to play a bigger ACW game despite not having any more Rebs painted up. A completely different scenario would mean clearing the table but what if the Yanks who had just been seen off, came back with friends? What if they threw a pontoon bridge BEHIND the Rebels? 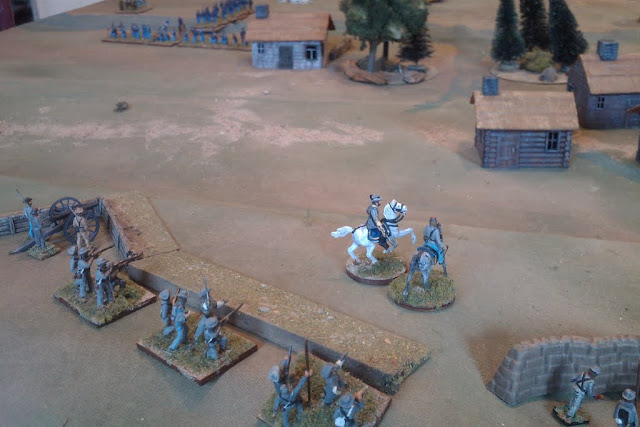 The Yanks, having also refilled  their ranks, sent the 1st and 2nd Brigades back up the way they had come, each with 3 regiments and a battery, the plan being to advance in column of Brigade and attack the Rebel right. The newly arrived 3rd brigade with 4 regiments and a battery crossed over the new pontoon bridge facing the Rebel left with orders to "amuse" them and then, once the main assault went in, to attack the enemy left. 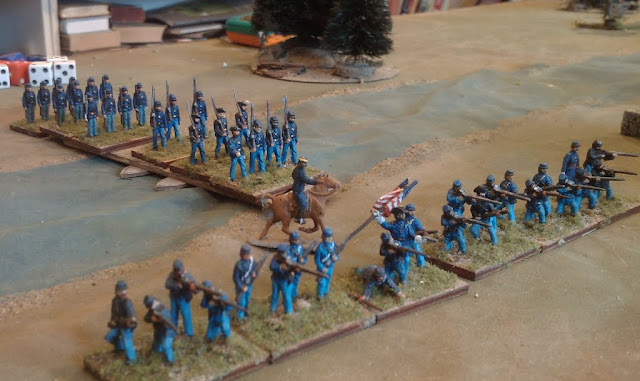 Colonel French filling in as Brigadier for 3rd Brigade. The lads in front were painted back c 1982, the ones on the bridge  are part of the new additions from that same lot.
Things went more or less as planned for Billy Yank. After a bit of softening up with artillery and rifle fire, the 1st Brigade charged in led by Brigadier Dryver.  OK so maybe the charge didn't quite go as planned. However, Reb losses were heavy and they didn't have many men to spare. 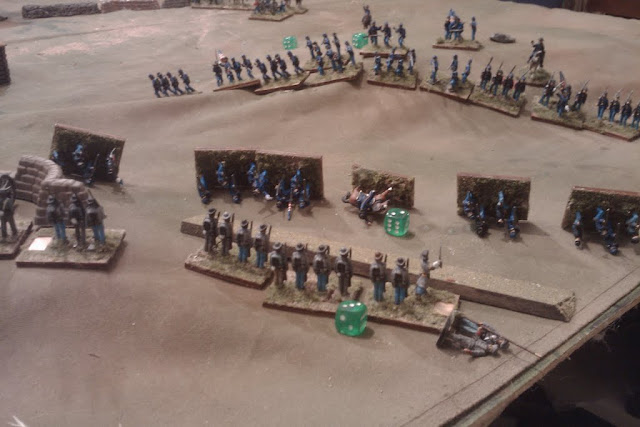 The shocking aftermath of the first charge on the entrenchments. The Rebs threw 10 dice for 4,5 or 6 and scored 10 hits! Then the Brigadier went down! The remnants of the 1st Brigade may be seen on the hill behind the 2nd Brigade.

On the Yankee right, the 3rd Brigade was a bit more cautious, and traded fire with the Rebs for a few more turns, opening up some gaps. When they finally charged in, they seized the front line, only to be thrown back by a counter attack. 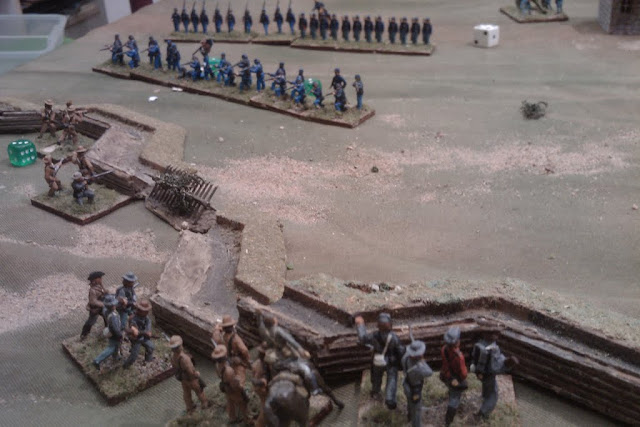 The 3rd Brigade prepares to charge.
Bringing their 2nd line forward, the 3rd Brigade charged in again and were bloodily repulsed, routing back towards the bridge. Hurriedly, the remnants of the Butternut brigade rushed to support the Virginians who had fallen back to rally while the cavalry held the line. Every one expected the cavalry to hold for a while but they were barely in place when a storm of shot, shell and rifle fire blew them away. The 2nd Brigade surged forward over the lines and in a fierce firefight broke the Virginians just as the Butternuts hurried up.  The issue hung in the balance. Could the battered Butternut counter attack throw back the last Yankee Brigade? 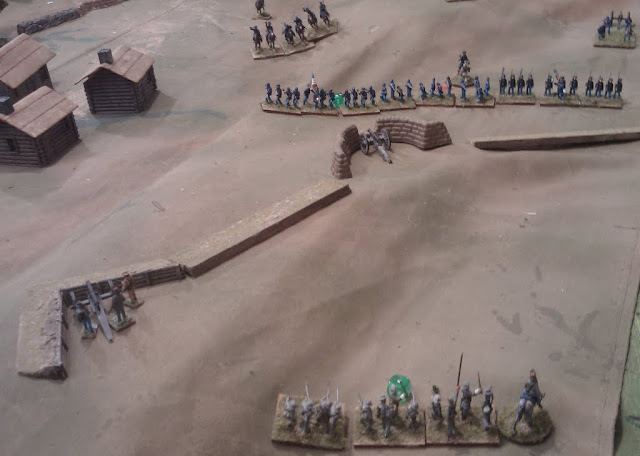 A brief pause as the Rebs desperately struggle to form a  line. The very hasty nature of the entrenchments is clearly shown here. A redoubt and sunken road from my old 15mm ACW setup and a toy sandbag emplacement.

I should also be able to do some smaller historical battles or sections of larger ones,  I need to reconsider my organization though which is standard 3 stand regiments as Units with 3 to 6 regiments forming brigades  as Commands. At this rate the game just fought was 2 divisions facing off and allowing up to a corps aside if I paint enough to crowd the table.

Some calculation on ground scale tells me that my stands have the right frontage for about 200 men so 3 stands is a very strong regiment and anyway, I don't really want 1 man in 12 to carry a flag or have to figure out to tell 30 regiments apart.I'm even more dismayed at having an anonymous collection of stands that get parceled out into temporary regiments.

I may be better off organizing to use Brigades as Units with these grouped into Divisions and the whole forming a Corps. 200 men per stand is the same as the alternate Fire & Fury scale with typical brigades being 6 to 8 stands, occasionally larger. This would mean that I could use F&F set ups from the Great Western Battles book, the Gettysburg scenarios from the rule book and Bull Run from the Courier. Or, well, I could if I still had a 6'x8' table... Parts of battles then! or maybe I should think about that temporary 5'x7' extension for my table.

Rules wise, I was pretty happy. Apart from some editing errors, there were 2 small tweaks, 1 to the wording for Shaken Commands, the other to the options for how hits get translated to stand removal.

The idea was that since "hits" are as much or more about loss of cohesion as actual casualties then it would make sense to mark one hit on every stand and then start taking them off. The unit would still be able to take the same number of hits. That was the theory. Apart from the hassle of  marking more hits, the idea had also been that brigades would gradually get weaker as they lost stands but with distributing hits,  the brigade could sometimes take 50% hits without losing any combat power. Then it would disintegrate rapidly as each  additional hit removed a stand. It also meant that defensive fire against a charge was less effective since they often wouldn't reduce the attacker's combat power.  So I have gone back to the original idea that a stand comes off for every 2 hits. One could always substitute casualty stands as space holders, could.

I'm off to Fredericton for a few days to visit family. This means several days away from gaming and about 10 hours of highway time to ponder gaming, so who knows what I'll do next. More ACW? An 1840's MacDuff game or maybe back to Ancients?