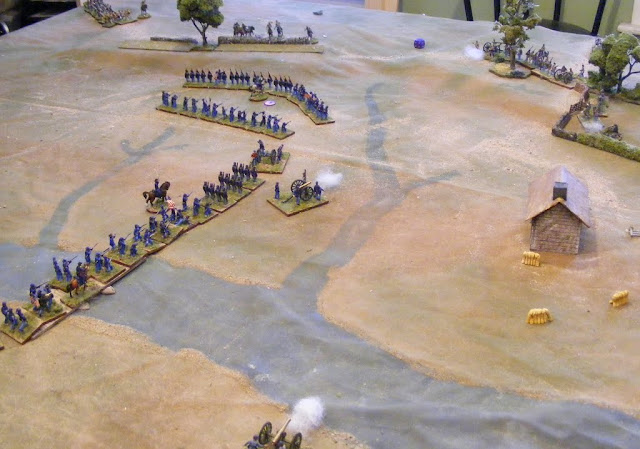 Word has been received of yet another clash between Federal and Rebel forces along the line of the Paynted River. Catching the Rebels by surprise, the First Division of the Army of the Kennetcook made an over night march and threw a pontoon bridge across the river. As the 2nd Brigade crossed over, Rebel cavalry could be seen topping the low ridge ahead. As they hastened  to deploy, a puff of smoke and loud report announced the presence of horse artillery. 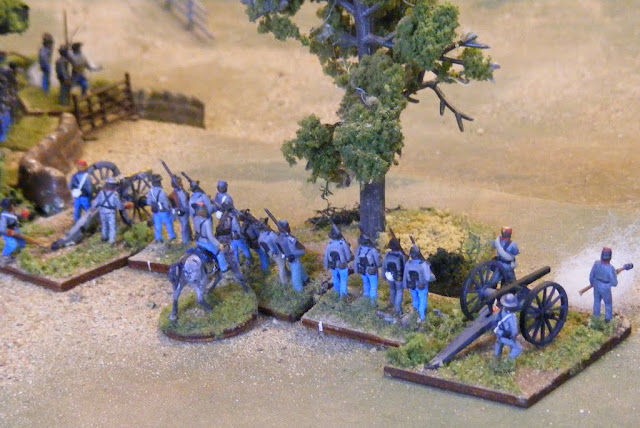 Despite casualties from sharpshooters as well as the battery, the blue clad veterans maneuvered steadily while their own guns returned fire just as grey clad infantry began to appear, Initially ahead of the 2nd Brigade and then to its left. General Williams grasped the situation in a flash and messengers galloped off. Moments later the blue line began to shift to the left as the First Brigade moved up to take over their positions and form a reserve. With a ringing cheer the long blue line swept forward, pausing only to unleash a tremendous volley. It was like a pair of boxcars rolling up the hill and the Grey clad infantry wavered and fell back. 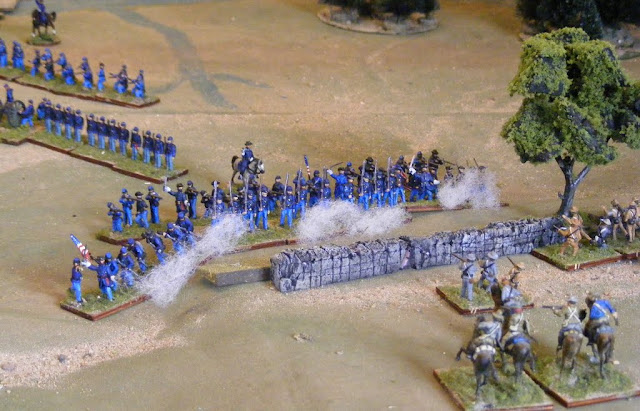 Following up on their success, the 2nd Brigade surged up the hill, three regiments attacking with two more in reserve. Smashing into a thin line of dismounted cavalry, the 2nd Illinois sent them running but the Second Carolina wheeled forward, enfilading the brigade's left. After a prolonged struggle the battered Blue regiments fell back. 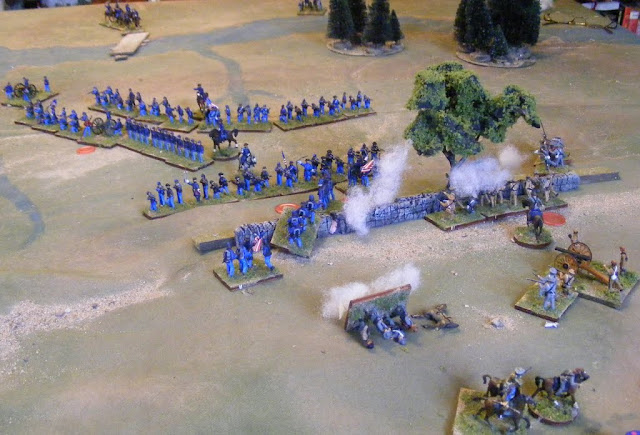 The Rebel line on the hill was looked thin and ragged by now and without a pause, the reserves pressed forward and opened a hot fire.  The Rebs began to waver as the 1st Brigade came forward at a run, extending the line and opening fire. Eventually the battered rebels could take no more and retreated off the field. 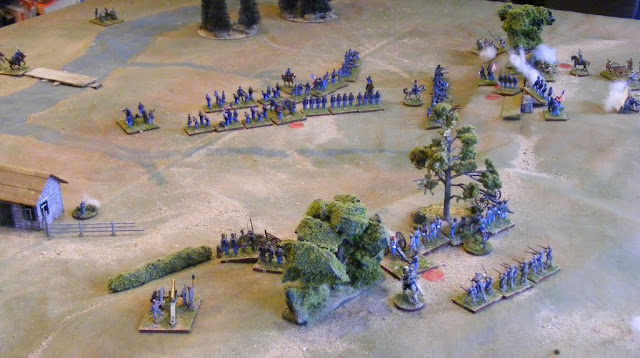 On the right, the concentrated fire of 4 Federal batteries silenced one Rebel battery after another. At last General Rosser seemed to wake up and the 1st Georgia and 1st Carolina  began a hesitant counter attack on the Federal Second Brigade.  As the musket fire rippled up and down the lines, the 11th Indiana Cavalry slipped almost unnoticed around the Rebel flank. At the last minute, General Rosser galloped across, ordered the reserve battery to be change front to the rear while he personally led the sharpshooters to help defend  the guns. It was too little, too late. The bugles rang out, the swords went up and with a cheer, the Hosier cavalry  charged up the hill, scattering the sharpshooters, cutting down Rosser and crashing through the battery into the rear of the 2nd Georgia. The shock collapsed the rebel line and sent the survivors fleeing into the woods. 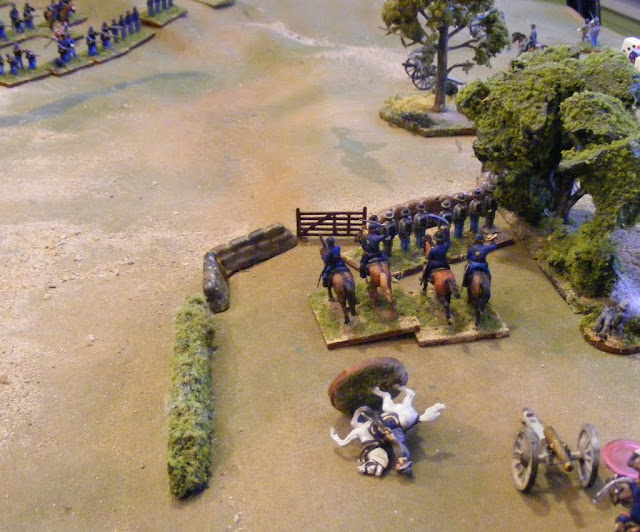 It seems that an aide helped General Rosser to evade the Federal cavalry and it is certain that this resilient officer shall fight again, but not today.

It took me most of the morning to clear the snow today so the game was a welcome diversion despite a few achy muscles. Once again the rules were Hearts of Tin. I meant to lean  a bit towards the Rebs but  today it went all the Yankee way. The Reb army started off ok but after a  lapse in judgement which left a  gap in the defence of the sunken road on the right hand hill was followed up by a shockingly effect Yankee volley ( 5 dice, 4x6's!), the army seemed dazed, like a deer in the headlights. The first brigade and 3 guns sat quietly under a barrage by 4 batteries and watched a masking force of 2 regiments while the other 8 Yankee regiments assaulted the 2nd Brigade on the right hand hill. It wasn't until the cavalry and 2nd Brigade were shaken  that it occurred to me to make use of the 1st. The Yankee 2nd Brigade had suffered heavily in their repulsed assault and there was some hope that a counter attack would shake them.  But really, it was over. The Yankee artillery was just too well handled and maybe a little bit lucky while the Reb artillery was just the opposite. The 2nd brigade battery never even got off a shot.  The spectacularly effective cavalry charge that ended the game was just the icing on the cake.

Rules wise, the tweaks all worked but I realized afterwards when I double checked a few things, that I had been playing with some unwritten rules and some others where what was written didn't accurately  reflect what I had meant, and a few others where I found myself playing an older version. I have added the minor bits that were missing or misleading and rather than trying to retrain myself, I have adjusted some bits (esp melee result) to reflect what I actually do.

For anyone curious about the designations, I merely coupled the arbitrary, sequential ID number on the back of the stands with a State name, based on what the uniform made me thing of. No representation of any real regiment is intended.

That's probably it for the ACW until I get some more Rebs painted up but who knows?.