There were a lot of things I should probably have been doing today but while I am not technically a father, I tend to enough critters to qualify in my books and I had the afternoon to myself. I briefly thought about clearing off the table and getting the new cloth out but that seemed like a lot of work for an off the cuff play test so I just cleared the big fences and houses, dropped in an old log cabin and hauled out the ACW lads to try the proposed 20 man units. The scenario was a simple equal force encounter with victory being based on control of the road junction and ford. Each side had 2 brigades of infantry, each of 3 regiments as well as a battery with 6 gunners and an independent cavalry unit of 6 figures. 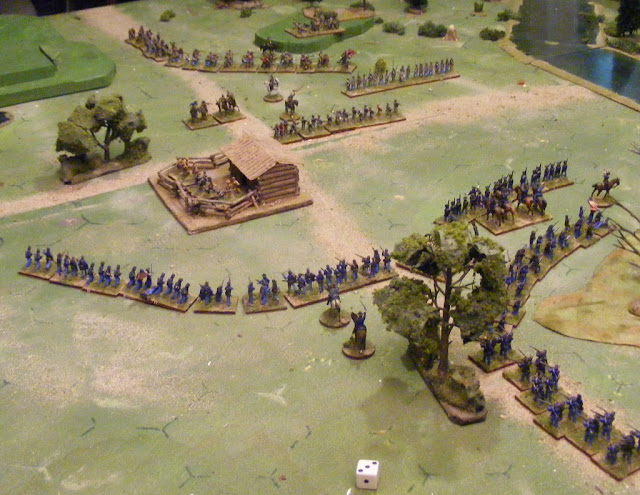 After a brief, inconclusive (and pointless) clash between opposing cavalry units, the armies deployed. The Confederates had been first on and kept the initiative through most of the game allowing them to seize the objectives, forcing the Federals to attack. 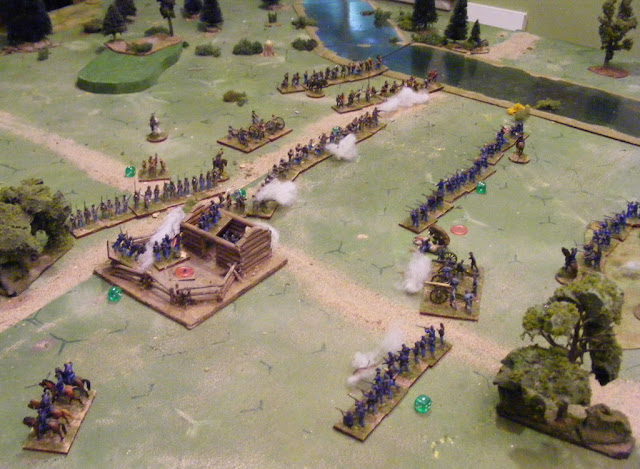 After pouring fire into the village at the crossroads, the Yankees assaulted but were repulsed and, after the brigadier was hit,  routed. A second attack eventually succeeded in finally taking the village but a counter attack soon threw the Yankees back out, bringing the US 1st Brigade to shaken in the process. A 2nd regiment broke but the third one hung on for the rest of the game, keeping up a sporadic fire. At this point, things looked bleak for the Federals, the Confederates now had the objectives and a superiority of forces. In other circumstances it might have been time to go home but the Civil War wasn't well known for giving up hopeless assaults at the first sign of trouble and the Rebel artillery was temporarily out of action having just limbered up to come forward. The Federals closed up to medium rifle range and opened up. There was no real reason for the Rebs to counter attack rather than sustain the firefight until the Yanks became shaken and went home but for some reason they thought they saw a chance to break them quickly and avoid the mutual blood bath. It almost worked, they sent 2 regiments reeling but didn't quite inflict enough damage, and then Brigadier Kinch went down.  The attack stalled, took heavy losses and fell back shaken. the battle of attrition was on. 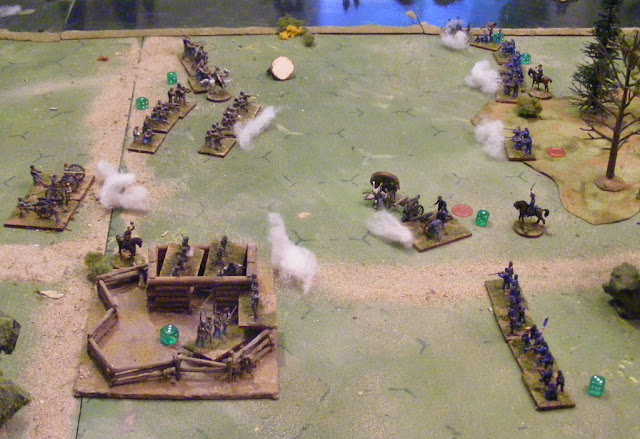 It took several more turns of musket and cannon fire but the Yankees finally broke, a few hits before the Rebs would have. The Reb counter attack and some stubborn Yankee regiments had turned a sure thing into a near run thing!

Just a small, simple game taking about 2 hours but I liked the feel of the larger units and I liked the flow of the game which had a good feel. If I had triple the number of regiments,  it would make for a full day's game and might call for a turn limit. Brigade sizes for the early war seem to vary from 3 to 5 regiments. Three worked well but I may settle on four as a standard bringing me back to a Division of 12 regiments per side plus a Cavalry division and of course guns. That should be enough to keep me busy.

So I'm going to go  ahead and reorganize the existing figures, painting more where needed to match existing poses and trying to make units distinct in some fashion. I'll also give each regiment a flag and a name now that the org is set. When Jerry surfaces again, if he wants to stick with our agreed on 3 stand units, I can just leave a few stands on the shelf.

On to Lentulus' 10mm tricorne lads for the 2nd game of the day and a look at heavy cavalry vs infantry.