Aspern Off The Wall 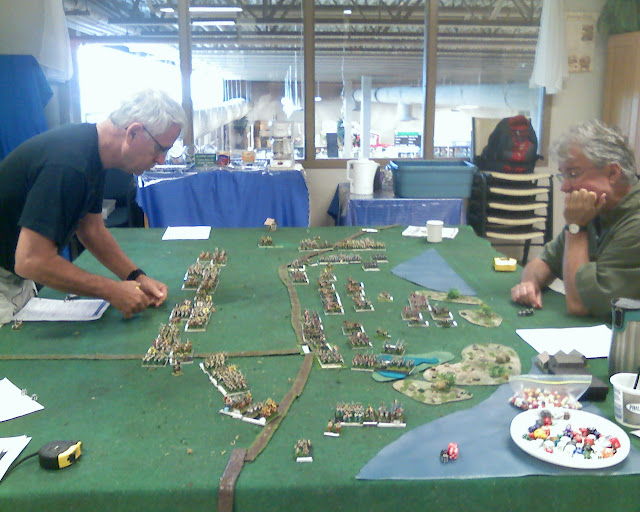 A young crowd gathers at the Greenwood Sobey's Community  Room.

It was a beautiful hot sunny summer's day today so it seemed natural to drive the hour down to Greenwood to play a game in the air conditioned Community Room at the Sobey's Supermarket. The event was to be Aspern-Essling in 15mm played with Grande Armee and at one point 7 gamers were on side. Life takes its toll as usual and we were four in the end. Valley Jeff (the Valley nickname being used o distinguish him from Yankee Jeff seen on the left above).  had organized the game and provided the troops (including a handful of my old Austrians). He was almost finished a run down on the rules when his cell went off, calling him to work for an hour or so.

Left on our own, we eyed the GA rulebook, did a quick consensus check  and  then I turned to the white board on the wall and quickly jotted down a back of a postcard set of rules based on the proposed 18thC rules posted last week but with some allowing for the Napoleonic setting and the  3" Brigade bases and what not. Not a perfect set of rules by all means but the dice flew, toy soldiers died valiantly in droves and five hours passed in a flash.

By the time Jeff returned,  Emperor Gary had nearly succeeded in driving the Imperial Guard through the middle of the Austrian army but the French flanks were on the verge of crumbling. Let me note here that Yankee Jeff & I, thinking without reason that it was Day 1, had agreed to mask the villages and strike the French center so things were not exactly going as planned.  We played another hour or so with the French staving off our best efforts to crack them. An army morale rule would have helped but I didn't think of it till it was time to convince the French that we had beat them. Both armies had suffered fearful losses but the French had lost more heavily than the Austrians and 1/2 of Aspern as well so it was close enough to the historical result to call it.


A good day of gaming all in all.

Email ThisBlogThis!Share to TwitterShare to FacebookShare to Pinterest
Labels: Napoleonic