Battlecry of the Single Handed Induna 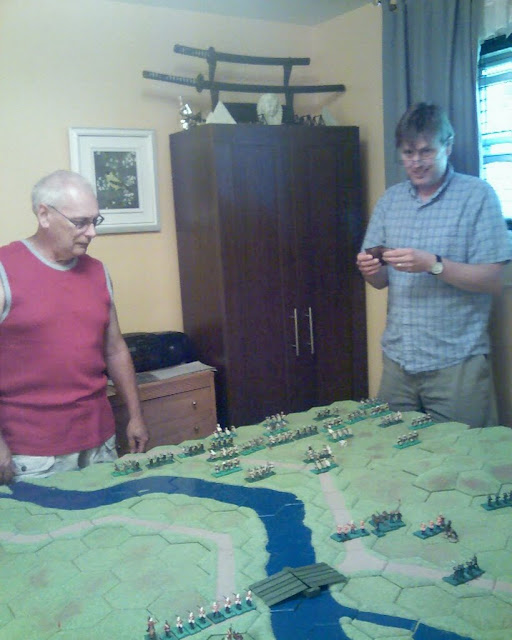 Yesterday, thanks to a particular alignment of the planets and despite, or perhaps because of,  various communication failures Ron and I were joined by long time friend and wargame-opponent Peter Douglas aka The single handed Admiral who was in town on a family visit. There had been some scheduling issues, much uncertainty and some cancellations and when I left home for the hour long drive I wasn't actually  sure there was going to be a game.

I arrived expecting to try out the proposed final version of MacDuff but after looking at the hexon terrain, all set up for Grant's Two Sides of the River  and thinking back to the last couple of games, Ron and I got to talking and eventually I suggested giving Battlecry a go. The British were easy, we played them straight up but the Zulus were trickier. Ron has no rifled armed Zulus so we considered making them cavalry, fast with adjacent combat only but that brought up too many issues so we just treated them like infantry with adjacent combat only but gave them 2 units for each scenario unit of any kind.

At this point, Peter, who had had a last minute cancellation showed up and we decided to try an adaptation of the overlord multi-player system. In our lesser form with Grant's TTT being played straight up, each CinC could play 1 card and give one to his subordinate. (Peter being Chief Induna with Ron under him, myself playing the Brits with an NPC Brigadier. )

Forces were Brits: 8 infantry, 2 cavalry, 2 artillery & 3 Generals in all. Mission prevent the Zulus from bypassing (or destroying) my force and moving down river, Break point 6 units or generals. Zulus  24 infantry, 3 Generals, break point 12 units/generals.  I can tell you, when you're split up and spread out, on 2 sides of a river,  a horde of 24 Zulu units coming up one bank looks like a lot of Zulus!

The game started comfortably enough. My infantry and guns on the right opened up early. Throughout the game my troops had a distressing tendency to fire high  getting cavalry, artillery and command symbols instead of infantry. If the Zulus  had been riding horses they'd have been in trouble! Still, there was a constantly trickle of casualties as the Zulus came warily forward, the left horn working its way up in dead ground towards my flank. All of a sudden, my field gun ran low on ammo and had to pull back and then the Zulus made a series of rushes, over whelming several of my front rank units. It turned out the wily Zulu's had been playing "scout" cards which allow you limited action but also let you draw 2 cards and keep the best one. Then they unleashed their attack.

Things were looking bleak, almost 1/2 my army was still on the far bank and what was left on the near bank was now out numbered about 6 to 1! Never say die! An intrepid officer figure with sword and pistol, the last survivor of his company held the line seeing off attack after attack and sniping with deadly event until a  timely reinforcement of riflemen filled the gap (a good time to have drawn that card). As I rushed more troops over the bridge, the right horn of the Zulus (who had copied my reinforcement card) showed up on the far bank, forcing me to hold back a gun and infantry escort to deal with them.

There was now a bit of a lull in the fighting. The British pulled back slightly, sent the cavalry  to block the flanking move and tried to figure  out how to stop the Zulus from massing in the cover of the hill without having units overwhelmed. Finally as I personally led a squadron of Lancers over the bridge, the Zulus charged again. Another unit was overwhelmed and suddenly I was fighting for my life, surrounded by Zulus. Glancing at the table behind me I could see 4 units. If the 1st Zulu unit rolled 3 cavalry figures and the 2nd one rolled a saber, well the game was up. My luck held and though some of the lancers were cut down, we escaped. However, the whole in the line was huge and the left horn, massed on the hill, was starting to roll forward. In the nick of time some sailors dragged a Gatling gun forward (Another reinforcement card TG) and  opened up. With even more effect, the dead eye pistoleer captain came back up into the line. I think that lone officer did almost as much damage as the rest of my infantry added together! He will definitely be recommended for a VC!

There were a few more tense moments as the attack of the left horn was eventually held and then repulsed and  a limited counter attack shot up the loins but their attacks were not as fierce as the early ones while the resolve of the British rose as the day wore on (ie the combat dice took a turn in my favour on the last couple of moves giving me some narrow escapes that might have tipped the balance while allowing me to get 1/3 of my total "kills" on the last 2 turns) . With their Induna wounded and taken prisoner and 11  units shot down the Zulus finally gave up and retreated. 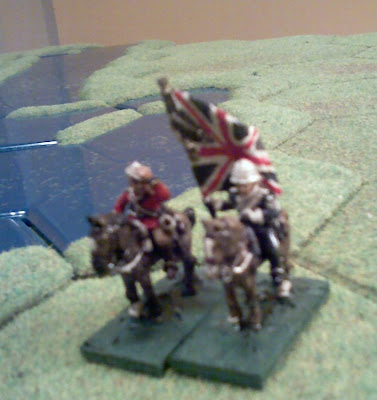 Once again Battlecry had provided an exciting game with a surprisingly good feel considering that we were playing out of period with almost no modification. The turns where the Forced March card allowed a group of Zulu units to move twice and attack were particularly scary and deadly.  After the game we did decide that next time we would let the Zulus move twice and not battle or move once and battle to get more the feel of their speed.  The sudden silencing of the artillery, just at a crucial moment was also just right (as much as I cursed it!). I'm going to have to add 1 of those to my Chance Deck!

The game took about 3 hours to play and we went through the deck 3 times if I remember rightly. the pace was furious and intense. I did take more pictures but the Bluetooth on my computer has packed it in and the only way left for me to transfer files from the old Motorolla is to text them to myself at a buck a shot and I doubt that the quality is worth it so this is what there is! .
The small units ( 4 figure "companies" in my mind) actually worked well for the Brits while the Zulus covered enough ground to look like a horde. During the turns where I had several units wiped out or reduced to 1 or 2 figures and had to hurriedly retire to avoid being surrounded and wiped out, it felt an awful lot like the scenes in Zulu Dawn! The number of small units and over all size and feel of the game brought back to mind some of my thoughts after playing the Portable Wargame about whether or not having more figures helps and about how many units are enough. I have this awful feeling that 8 man companies and MacDuff might not have been quite as exciting but I could be wrong. Cutting the number of units on each side in 1/2 in order to larger units, 12 or 20 men,  would almost certainly not have been as interesting. In any case I would cheerfully play a Colonial Battlecry game again and discussion has started in how to represent afghan units.

For the first face to face game (not counting our earlier Skype game) with Peter in about a dozen years, it was a good one with lots of excitements and ups and downs of fortune (and of course I won in the end, can't beat that!).