THE ADVENTURES OF PRINCE MICHAEL: EPISODE 12


THE ADVENTURES OF PRINCE MICHAEL: EPISODE 12

BACK TO THE WALL 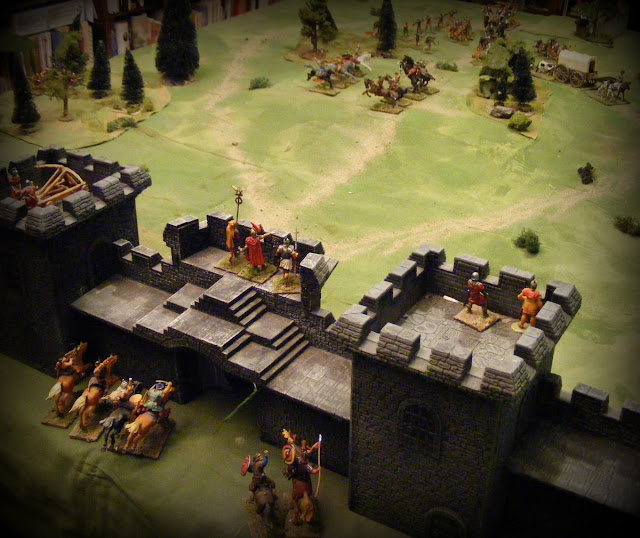 To Horse! The convoy is in trouble!

Since I had a shiny new copy of Comitatus in my hands, a game seemed in order. I still have the remnants of my 25mm Arthurian British  (cavalry from the 1970's, infantry from the 1990's); but they need some refurbishing and most of the opposition is still in ingot form beside some Prince August molds. The only dark age figures that I did have ready to go were my 40mm Elastolin Prince Valiant figures. These are based on 1" wide individual bases and normally I use them for  skirmish games but the numbers have been slowly growing and multi-figure elements are easily formed by grouping figures.  Three inches looked about right for javelin range and would match 3 figures deployed 1 deep. These in turn looked good, especially with 4 infantry stands deployed 2 deep.

When trying out a set of rules, I like to use an old chestnut of a scenario to remove that as a variable. Casting about for some small, familiar and reasonable dark age skirmish-ish scenario, my mind went to Wagon Train from Scenarios for Wargames. Given the theoretical background of my Prince Michael games, it seemed only right to replace the fort with "The" Wall. Once the terrain was laid out, I started sorting figures into units. Two issues soon cropped up. I didn't have enough cavalry or Saxon & Pictish infantry.  After some poking and prodding, I decided to cut the units down to a 2" frontage with 3 or 4 heavy infantry or 2 light infantry and only  2 stands to a unit. I also transferred most of the Prince Michael's infantry to the Saxons and once again slipped two Huns into Dearg Mor's Pictish cavalry.  The final OB didn't exactly match the scenario but  I've played it enough over the last thirty (OMG!) years   to  feel comfortable with it. 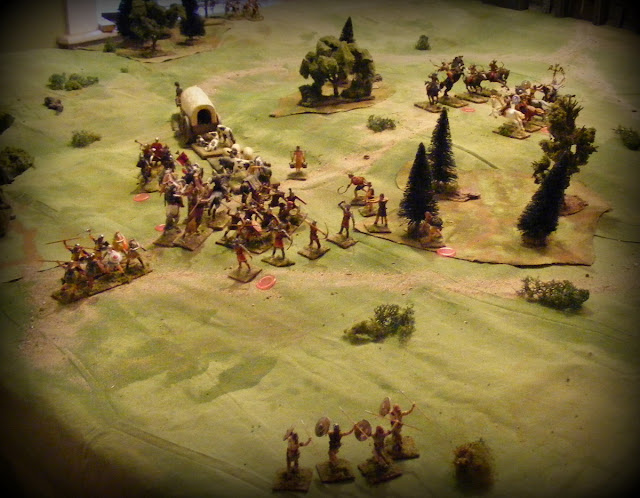 Around Turn 3, the convoy takes the left hand fork while Preisages confronts Dearg Mor on the hill.

The next trick was to try out as many troop types as I could while keeping the storyline (serving here in lieu of actual history) intact. Preisages'  Alan mercenaries were obviously light horse archers but it was tempting to consider the "knights" as shock cavalry. I settled for more appropriate heavy javelin cavalry and also resisted the temptation to classify Count Hubert's regular infantry as "Roman", calling them B grade shieldwall infantry as a compromise.  Prince Michael's tribal infantry only rated C grade. The Pictish cavalry was a problem, when I have more, Dearg Mor's household will be heavy but I settled for one 2 stand light javelin cavalry Comitatus rather than 2 single stand units, 1 heavy and 1 light. All of the raiding infantry was classed as B grade for experience with the Picts having a mix of archers and javelin men (Ax in DBA speak) but with Helgin's warriors counting as Shock infantry. Six 40mm wagons and teams just take up too much space on my little table so I substituted  livestock and pack mules and counted the wagon as 2 stands for victory point purposes.

If there had been a major fort on table as a destination, I'd probably have stationed Duke Stephen there as CinC but a gatehouse seemed like too minor a post so I placed him with the convoy and posted the young Tribune Johan in command of the gate and reinforcements but prohibited from leaving it so that the sortie from the fort would be largely uncontrolled.  At first I just included Prince Michael  with his spearmen but that just didn't feel right so made him a Contingent Commander with a 1 stand comitatus and a 1 stand unit as his sole command. Seemed about right for his character and past history. On the other side, Helgin was back as overall coalition commander  with his Comitatus and 2 units of shock infantry and 1 of archers with Dearg Mor as Contingent Commander for the Picts who were all light troops. 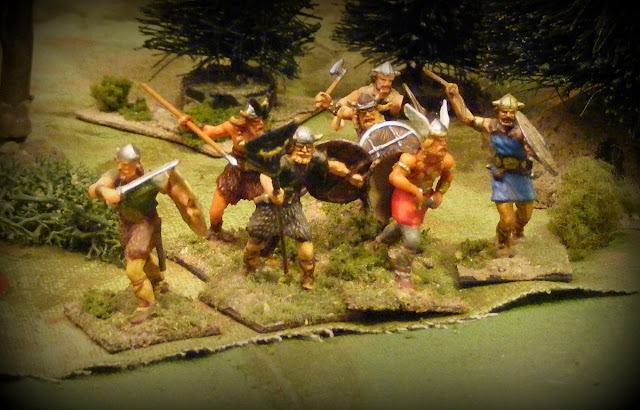 Helgin and his Huscarls lurk in the woods.
All figures in all pictures are 40mm Elastolin figures, mostly repaired ones or built from kits

To compensate Helgin for a slightly smaller than usual  force facing a  slightly larger than usual escort and to accomodate the generous movement scale that I had adopted for my small table, I dropped the possibility of some units not making it on and speeded up arrival time to a single die. To keep an element of suspense for myself, I diced for each off table unit at  the end of each turn.
Rather unusually, the game started with Pictish light troops arriving at a reasonable spot, heading the convoy off from its destination. There was a tense moment as Dearg Mor, who had rolled a CP of 5 making him the most able and charismatic leader in the board, led his household in a charge on the mercenary horse archers who had their back to a wood. A counter charge seemed like a chancy option but evading looked even worse. Luckily, Preisages was up to his usual standard and beat the enemy's die roll by 6 to 1, tying the combat. Both sides fell back, rallied and met again with the mercenaries from the fort joining in from the flank. This time the dice were level and the horse archers were sent flying. Preisages men eventually rallying off table while the garrison troops rode back through the wall to rally in safety. Preisages still lived up to his reputation and as he rode back, Dearg Mor was left reeling in the saddle from a powerful blow to the head, still in the saddle but without his former energy. (2 CP's lost to a wound). 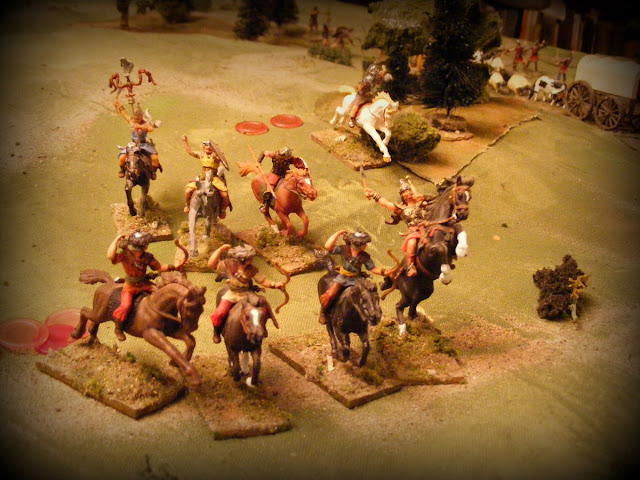 That's Dearg Mor on the roan in back, spear under hand, in red tunic with a horned helmet so poplar with the bad guys in this story.
Dearg Mor brought his cavalry up short, breaking off pursuit and showing off his horsemen's mobility by doubling back to charge into the convoy, except Duke Stephen had managed to position a unit of infantry smack dab in his path. Unable to coax his light cavalry into a frontal charge on formed infantry, they showered them with javelins, almost shaking them but by then, the convoy was passed so Dearg led them back over the hill . (with hindsight, probably a mistake, another turn of javelin fire might have done the trick) 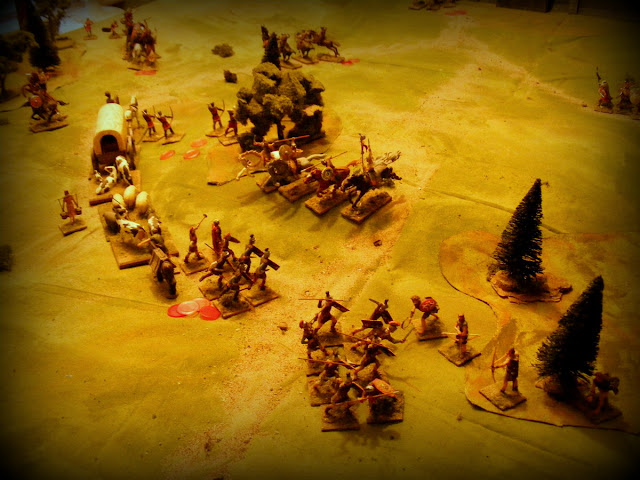 While the light cavalry swirled about the field, the Saxons had begun arriving ahead of the convoy from both sides of the table. Unable to influence his warriors from across the table, Helgin watched as they pressed boldly forward, threatening to charge headlong into the convoy except that  the single stand of garrison heavy cavalry caught everyone by surprise by galloping forward at maximum speed, losing all cohesion but catching the warband in the rear and, rolling up on the dice, scattering them to the winds.  Another crisis past. 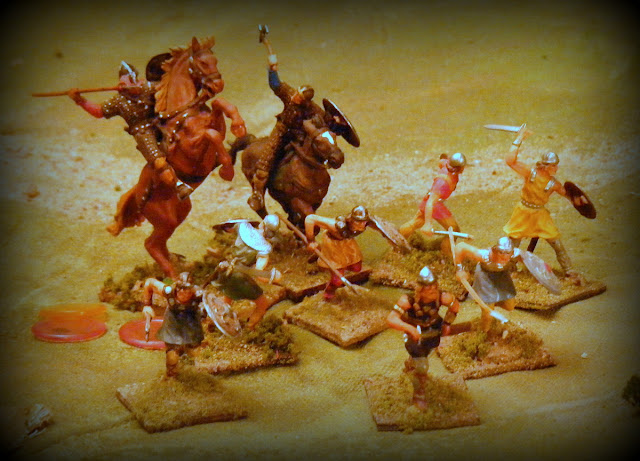 Things were rapidly reaching a head. The Pictish infantry, more or less abandoned by their leader were milling about the rear of the convoy tying down most of the escort but not in position to interfere and in no mind to move anywhere till Prince Michael led his spearmen forward to chase them off the field of battle.  The Saxons were marching post haste towards the convoy with nothing in their way. Suddenly, through the dust came the Duke at the head of his Companions. With the  Duke leading the way, they crashed into the latest warband to arrive and broke it apart. 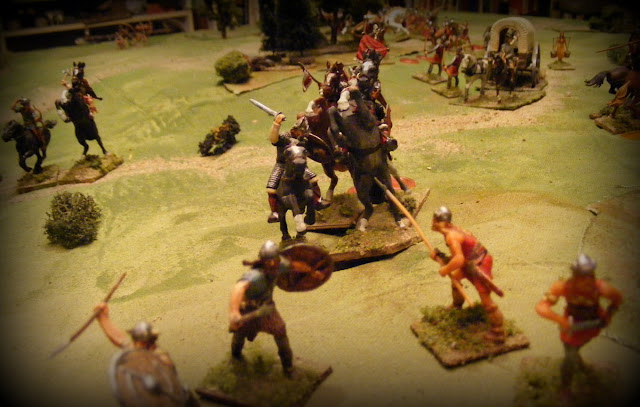 Another warband scattered to the wind before the Saxons could mass into a formidable shield wall.

Now, with the enemy cavalry out of the way, Helgin pressed forward, sending Dearg Mor and his riders to hold off the Duke.   Nothing stood between his Hirdmen and the convoy. Drawing his sword, he led his household forward but as they closed in, a red coated archer stepped forward and seeing the tall winged figure, sent an arrow straight into his eye. (1 die of fire needing a 6 to hit the unit, then a 1 to hit the leader then a 1 to kill him! What are the odds?)   Furious, his huscarls, all thought of plunder lost in a rage for revenge, veered away from the hapless wagons and charged the nimble archers, chasing them  into the woods. 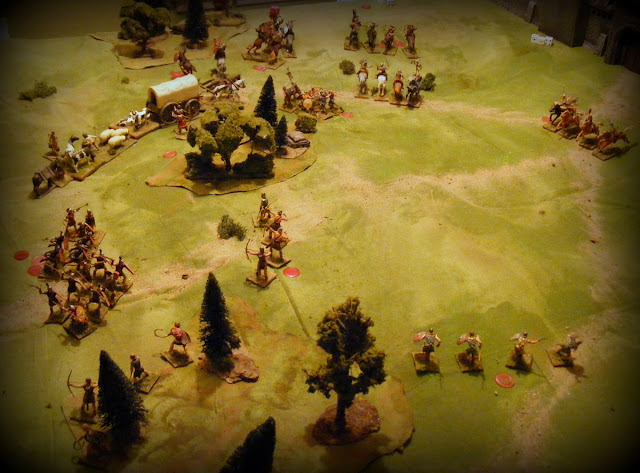 At the top, the crisis looms while just off camera at the bottom, Prince Michael is in hot pursuit of the javelinmen.

Duke Stephen knew that his heavily armoured companions had small chance of catching the light Picts if they chose not to face them but he and Dearg had a history (and I wanted to try out the personal combat rules) so he rode forward bawling a challenge to his old foe. Despite his earlier wound, Dearg was not one to run and rode forward. The two leaders met before their men clashed and with 3 mighty blows Stephen smashed his foe to the ground. Stunned, Dearg's companions rode forward to rescue their fallen leader but were soon struck down or forced to flee. 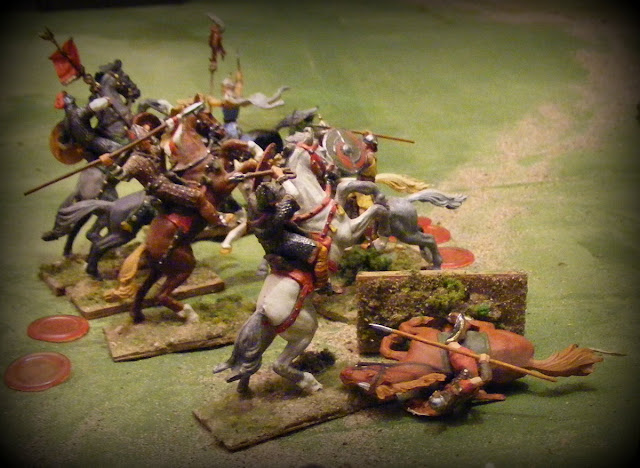 With the enemy left leaderless, there would be no trouble dispersing the remaining units and bringing the convoy though the gate.

This was an enjoyable nail biter of a game like most runs of this scenario but I'm not so sure it had been a  smart move putting my Elastolin's on the table. Its the largest force of Elastolins that I've mustered for 1 game and now  I can't think of why I would want to work on the 25's when I have another 50 or more Elastolins in the cupboard just waiting for conversion!