Well, hopefully the final return. I spent the morning wrestling with formatting, and the rules are now available for download from the menu on the left or here

I have decided once again not to worry so much as to what others might like or how they might organize and base their troops. The subtitle says 19thC but since they cover muskets they will still work for the 18thC it merely reflects my intent to use them for 1812, 1840s and maybe 1870/80's.

After some wobbling, I decided to go back to the old melee, partly because it can be fun and I don't expect to have to deal with a lot of huge melees in my games, partly for the connection to the original rules and partly as another way to differentiate it from HofT.

I have maintained a version of the control chart for units not in command range of their Brigadier or General but have not gone back to variable moves. 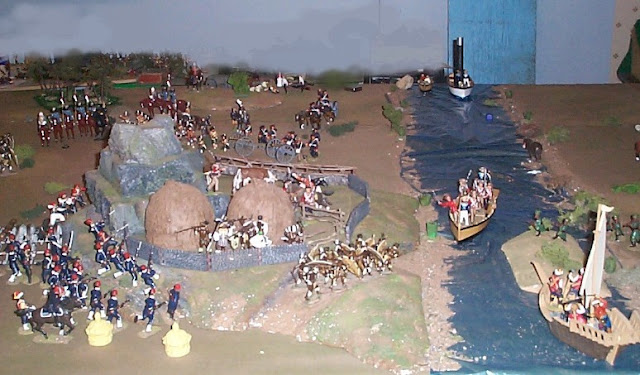 The Emir's Single Handed Admiral fending off MacDuff around the turn of the century.
(Back in the day when tables were 6'x10' and figures were 54mm.)
Posted by Ross Mac rmacfa@gmail.com