Don Featherstone: A Muse of Fire!

By now surely most of the wargaming world has heard the sad news of the passing of Don Featherstone, one of the greatest modern pioneers and proponents of the hobby.

I still remember the thrill when I found his book, Battles For Model Soldiers, in W H Smith's on St Catherine's St. in Montreal on my way home from cadets during the winter of 1970/71. Already I had an interest in military history, knew that somewhere grown men were playing wargames with soldiers and spent my time converting  toy soldiers into detailed models and painting Airfix figures and wondering just how one went fighting battles in adult fashion. Here was my salvation!

When I look inside the cover of that book more than 40 years later, the figure 7.25 has been penciled in, doubtless the price. It seems awfully cheap now but was certainly more money than I usually carried in my pocket at 15, more than my month's allowance anyway. I'm not sure how I survived the agonizing fear that someone else would find the book and buy it but when I finally got back to Montreal the next Saturday, there it was, and here it is beside me now. 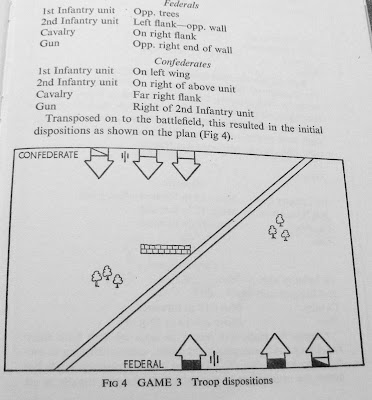 (from Battles With Model Soldiers by Don Featherstone)
There is little doubt that I would have found my way into the hobby with in a year or two anyway but Don's spirit, enthusiasm,attitude and advice has had a lasting effect. I think this short quote from that book sums up probably his greatest influence on me, and not just as far as my hobby goes:

"Nothing in these pages is a dictate, no word says you must or you shall do it this way. On the contrary, the book sets out from the very beginning to stimulate the reader to think for himself, and to use what he has read merely as a foundation for efforts and ideas which reflect his own temperament and character. " Don Featherstone 1918-2013