MacDuff Stripped to the Buff and Ready to Rumble!

Advance guards of the Red Queen's and Blue Republic's forces clash at the top of Simple's Pass. The crest of the pass is marked by an old stone wall between two groves of trees.  Travellers often remark that the Pass looks familiar yet somehow different.

I have finished a first rough draft of the latest version of MacDuff. Some elements of the original rules have survived in simplified form as has the over all intent of the rules and vision of the sort of game it will produce. There are also very heavy echoes of Rattle of Dice.

It was my intention to post the rules before playing but given the sticky nature of some of the first drafts of various rules (as in drawing internet traffic years after posting and after the rules have been scrapped by me),  I have decided to wait until I have played a game or two played and finished proof reading and adding odd bits like the chance cards. So far they have been reduced from 11 pages to 3, largely by removing explanations, definitions and special cases. Some of these things may be needed but anything I can live without is being thrown out in favout of letting people make up their own minds about how to organize their troops and which modifiers to apply and when. Here is the first draft of the intro:

"Introduction. This is a simple set of miniature wargame rules designed primarily for fighting small battles and skirmishes on the fringes Europe and America from around French and Indian War to around the first Boer War. It is aimed primarily at experienced wargamers, like myself, who want a simple set of rules. You may organize your armies as you see fit and decide for yourself and decide which units may use which modifiers. There are as few restrictions as possible on tactics or who can try what. It is up to you to study what was done historically and maybe try it on the tabletop and see if it works (in theory you should get the right result most of the time though the process might be fuzzy) or to develop your own organization and tactics. The rules have come along way from the way they were when originally published in the Courier #73 in 1997 but I have kept the name because I use them for exactly the same sort of games."

The major changes in actual play are in play sequence, morale and melee. In the end  I chose to keep the card draw sequencing as an option and that meant either a shared, simultaneous shooting phase or a second round of card draws for shooting. The extra work didn't seem worth the latter. I was going to keep the figure vs figure melee but I really prefer dicing for hits and have been tempted to change it for years. This seemed like the time. For morale, I borrowed and modified an idea from Featherstone for particular tests. I did some of these for Rattle and have copied them pretty much verbatim while adding two: a repulsed by fire test slightly different from the current MacDuff one and an under strength test.

Right! There should be just time to play a turn or two. 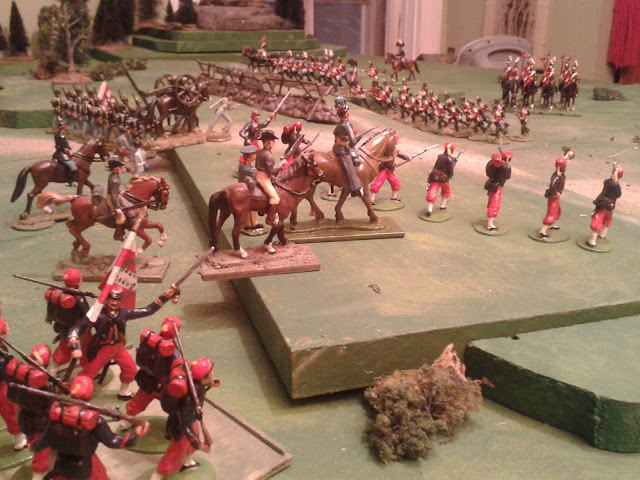 Lord Snooty rides ahead of his escort in his eagerness to experience battle in Atlantica.
Posted by Ross Mac rmacfa@gmail.com