Things Rattling Around in my brain.

Just an idle post to show the sorts of things that clutter my brain and confuse my thinking from time to time.

When I played the supposedly 1860 something Hook's Farm game last week I was slightly bothered by a feeling that despite the longer rifle ranges, the game didn't feel very different from an 1840's game. Two sorts of questions sprang to mind: " Why not and what could be done to fix it  without complicating things?" and "Why does it matter?".

Part of the first answer is that despite the improvements in firearms, tactics hadn't yet changed drastically so battles were not yet quite so different. Another part is that I am not showing very low level tactics and perhaps not done as good a job as possible at portraying skirmishers and the low effective battle range of muskets.
The problem with skirmishers is that unlike earlier periods, these were often integral parts of the line units but operating several hundred yards in advance and slowly turning from a security screen at the start of the century to often being the main firing line by the 1860's. 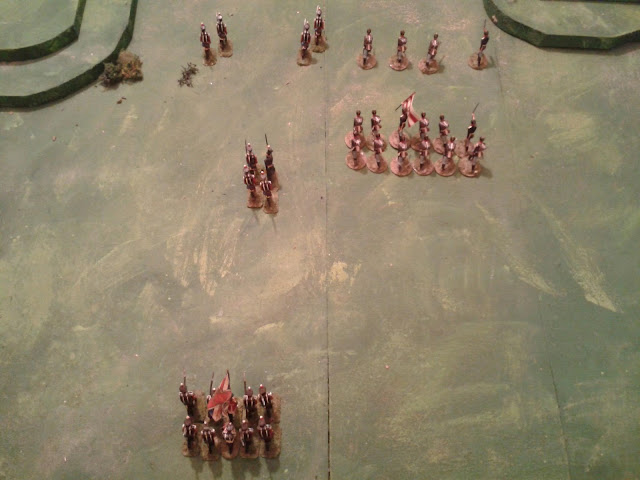 A comparison of manual to table top tactics.

On the left we see a British battalion deployed using the 1862 drill manual at a ground scale of 3"=100 yards which is roughly the scale of Rattle of Dice. Roughly 1/4 of the companies are deployed as skirmishers, acting in pairs at 5 yards between each pair or such distance as will allow them to cover the front and flanks of the main unit. At a distance of around 200 yards behind them, less if there is dead ground, are the supports for the skirmish line formed in line or company columns according to terrain. These allow the skirmishing companies to be relieved if the men are tired or run low on ammo or can be used to extend the skirmish line, cover its retreat or possibly thicken it if hard pressed.  About 300- 500 yards behind the reserve is the rest of the battalion in line or column, and thats leaving out an optional but recommended additional reserve in between  the supports and the main body.  That's right the battalion of 600 men in "line" should have a width of about 6" and a depth of 15" to 20".  Doesn't leave a lot of room on a 5ft deep table, in fact one could get away in most cases with leaving the main unit off table.

On the right we see  a typical wargame representation of a battalion in line with skirmishers deployed. Still 4 skirmishers and the same width but only taking up maybe 6" or less in depth.  Not quite right but practical.

Passing on to effectiveness, there are several sources that claim that the aimed fire of a handful of trained skirmishers  is much more effective than the massed fire of several times their numbers of massed rifle fire despite the theoretical possibility of the latter being aimed. Its more about psychology than physics. There is a lot to be said for systems which do not degrade a unit's firepower with casualties but toy soldiers being what they are I like the effect on players that it has. The trick is making small arms fire effective without  it being quickly decisive at anything beyond the sorts of ranges that constitute a charge. 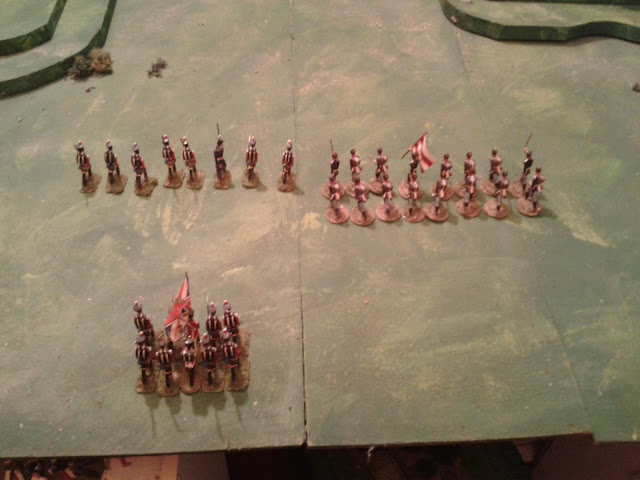 Two alternate methods of showing a mid-late 19thC firing line with supports.
After giving up on trying to make skirmish fire more effective than volleys without being able to shred attacking troops even before the advent of the Chassepot,    and being tired of trying to coral and control the tabletop skirmish/firing lines of untrained players (not to mention my own) I opted to deploy infantry in a 2 deep line and assume that both sides were using similar tactics and would thus cancel each other out and the presence of skirmish lines and supports need not be shown explicitly. This does somewhat reduce the flavour of the period but does increase the resemblance of the tabletop to contemporary Lithographs. The provision for skirmish lines does still exist in Rattle if players wish to portray them but they are treated as separate units and its up to the player to remember that they are linked and should be used to cover their own units unless originally detached to go off and do something special. It would be particularly useful if deploying an army that used them against an untrained army that didn't but perhaps then the  skirmishers would need some sort of fire bonus.

The 2nd question has a superficial answer and a real one. On the surface it matters because it affects how well we are recreating the period but given the simple toy soldier nature of the rules its hard to give this too much weight as long as the overall relative effects are right. The real issue is that if the two periods feel too similar, there's no real reason to clutter the shelf with two sets of musket era armies plus a pair of rifled musket armies and a set of breech-loading rifle armies.

As we get into the re-creating issue,  I've realized that I could really use a pin rule to reflect the paralyzing effect of rapid rifle fire, as well one for as the increased use of extemporized cover by prone troops. I just haven't quite figured how to get it just right and simple, something like pinned by X amount of hits with pinned troops counting as in cover and with a morale roll to try to go forward again but reaction fire would help and that's another can of worms to be wary of. Hopefully the sheer volume of fire of breech-loaders will lead people to attack with skirmish lines which should have about the right effect.

With regards to my own armies and limited shelf space, it reinforces the need to act on a tentative decision taken more than a year ago to merge the 1812 and 1837 armies into one set and settle the rest on the 3rd quarter of the 19thC with an eye more towards Lithographs than gritty reality. Might not hurt to increase the lethality of rifle fire a little bit vs muskets and add in some rules for improved shrapnel should I push the envelope towards 1870.