A couple of wagons, a road through the woods, what could go wrong? 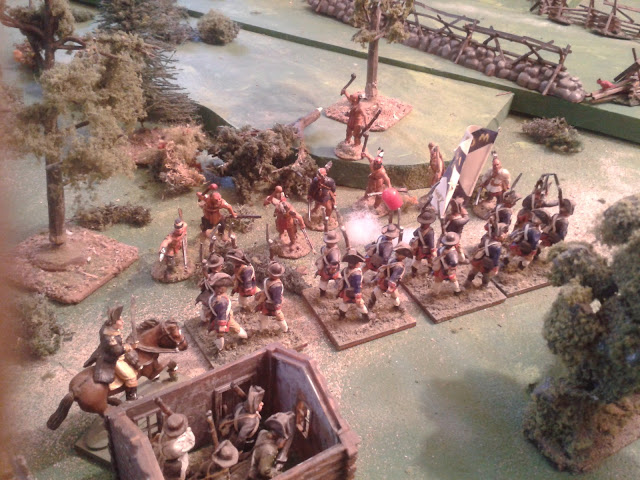 The third game to test out the latest revisions was to be ambush, not a handful of warriors against a family of pioneers but an engagement closer to Brownstown or Beaver Dams  with a few hundred warriors and soldiers on each side. Some fudging of figure to ground scale is pretty much unavoidable when fighting these small actions in MacDuff with 40mm figures. I decided to just live with it and rationalized that with ammo tight, ranges would be short, say 1"=15 yds instead of 1"=25 yds which should have given me around 1 figure=15 men, but I treated 8 man groups as "companies" or about 1/2 that, and then just played as written. Although I have left the card sequencing as an option I went with the initiative roll.

The terrain was essentially what was on the table for the last game with the addition of several small farms and a growth of forest over every thing else. (note to self, find the rest of the trees and make some more) I wanted to keep the game small, partly as a test and party as being in keeping with the situation. For the ambush party, I took 2 black face cards each representing a band of 8 Abenaki or Miqma warriors, 1 red face card for Hessian Jaegers and 3 other cards as blank. I also put 1 card for a company of Royal Highland Emigrants and a blank card as the reserve in the clearing at the end of the table. I then took a card for a unit of Loyalists and a blank and shuffled these 2. One was assigned to the reserve deck which was dealt face down in the farm fields at the NE corner. The other was shuffled in with the Indians and Jaegers and deployed in the woods along the road. When the enemy approached within 3" or a unit tried to fire or move or tried to not spring an ambush, I flipped the card to see what it was. 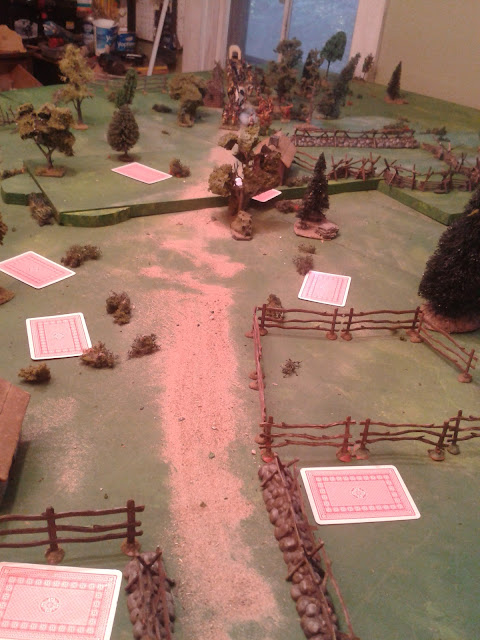 The Rebel column was led by 2 companies of the Belmont Blue's, Continentals. They were followed by 2 companies of militia, and 2 more trailed at the end. Each of the flag stands was treated as a Commander for its battalion. Around the wagons was a company of armed wagoneers and 4 riflemen.

The Rebels moved first and tripped the first hidden marker, a band of Indians lurking in the woods. They failed an orders test to stay hidden and fired point blank at the Blues, hitting nothing despite the enfilade bonus (trade muskets!)  I made the Blues take a rally test for being surprised anyway but they passed with flying colours. On turn 2 the Loyalists moved first. If the Indians stood there, the Rebels would turn and fire back. They could call it a failed ambush and fallback in good Indian fashion or they could charge into the flank Hollywood style hoping the Blues would fail the orders check to turn and face them, or they could fail their own orders check. They didn't so I charged them in. The Blues made their roll, turned, and unleashed a point blank volley as the warparty broke cover. With 2 figures down they took a rally test and faded back into the woods, waaaaaaay back. After a pause for the Blues to reorder themselves and let the smoke clear, the march continued on turn 4. 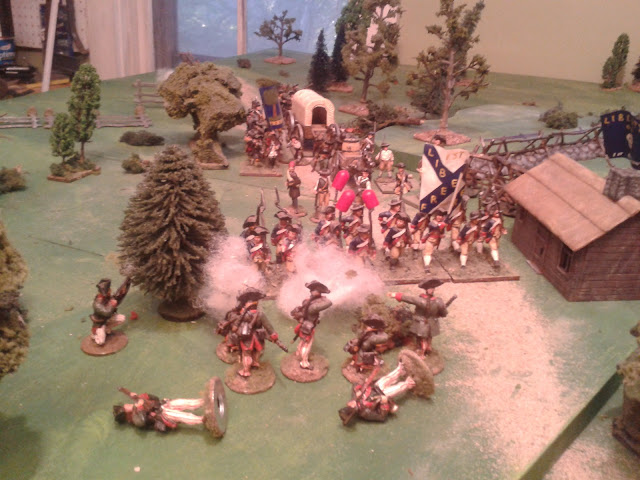 As the Blues marched up the road, card after card turned out to be blank but eventually the Jaegers appeared. Unfortunately for the Jaegers, the Blues were hot today and the first volley tearing into the woods almost wrecked them. It took a turn or two to get the Jaegers to fall back but eventually they managed to back off to use their rifles from beyond point blank musket range. The Blues kept coming but their losses were mounting rapidly. 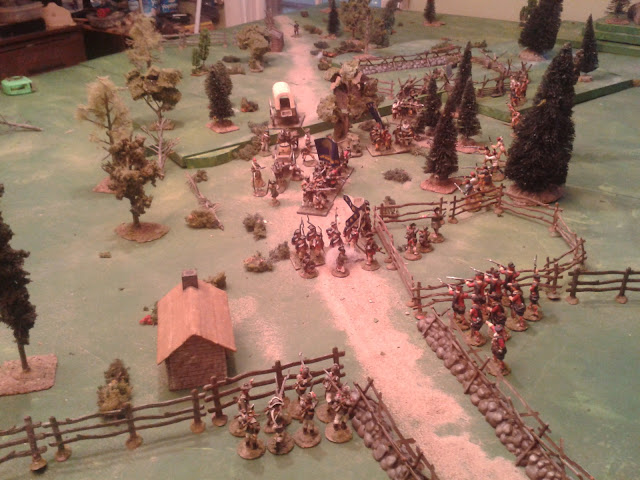 Overview of the field.

While the column pushed forward, the riflemen and some of the militia went chasing the retreating Indians leading to a firefight around John Simple's farm on top of the hill. I suspect the riflemen had broached a keg of rum in one of the wagons though since they seemed unable to hit the wide side of the cabin let alone an Indian. Their dull green smocks apparently made good targets though and one after another they were shot down until the last one fled. By the time the militia floundered through the woods into the open field, the Indians were gone again and the chase went on.

Back at the road the second band of Indians finally emerged and making lots of noise threatened the 2nd battalion of militia as it passed the convoy and deployed. Behind them the Highland Emigrants and the Loyalists were revealed manning the fence line. The Blue's, tired of being shot up, lowered bayonets and charged. The Jaegers decided they had a good chance to stop them. Bad decision but the  remnants rallied behind the Loyalists. The Blues, hot in pursuit, crashed into the Loyalists before they could fire. A prolonged melee ensued with Colonel Ross having to throw himself into the fray to keep the Blues at it.

On the far side of the road, the veteran Avalon militia cooling deployed and unleashed a devastating volley into the woods sending the Indians flying off table. Marching forward they finally reached the Highlanders who were patiently waiting  for them to come into close range. Again the militia fired first and again they rolled a fistful of 6's. The remaining Highlanders steadily returned fire but things looked hopeless.  Any minute now the whole Loyalist force would give way.

Suddenly, Col. Ross went down and, reduced below 1/2 strength, the Blues broke to the rear. Crossing the road and putting himself at the head of the company of Loyalists,  Col. Hector Macfarlane led them over the fence with bayonets fixed, sweeping all before them and capturing the wagons in the fierce pursuit. 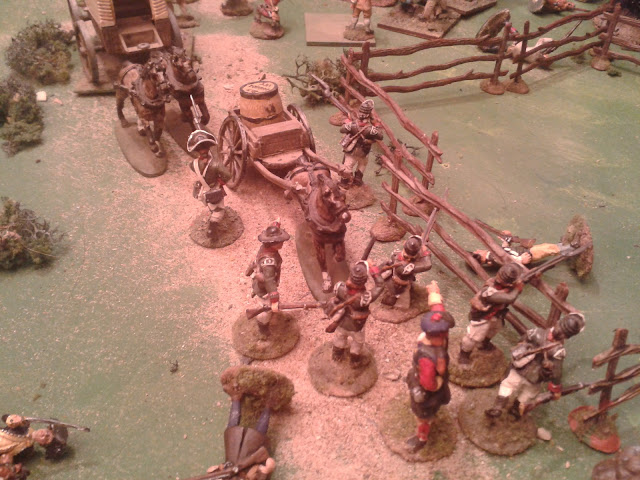 It all worked fine to my great relief. The only real difference from May's 1812 games at Huzzah is that there seemed to be fewer odd things where I needed to fudge things and no situations where opposing groups in the woods could not hurt each other apart from melee.

Now, back to painting figures!