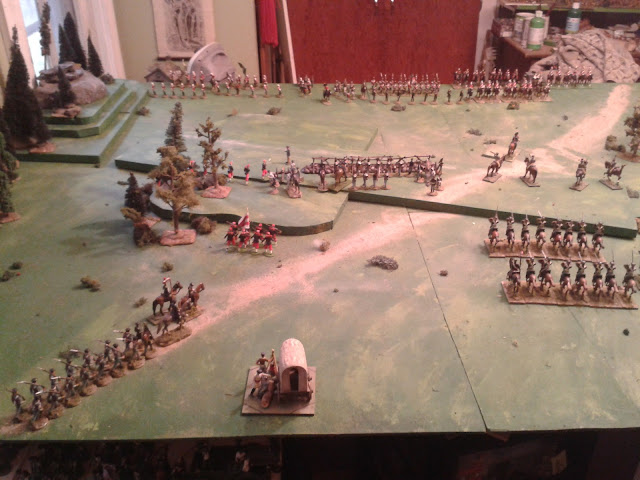 The 2nd test game was fought in about a dozen different sessions over 2 busy days and already the details are fading and I'm tired so I'm just going to summarize.

The situation was a counter attack by Red who had been driven out of the pass. Units that had lost heavily or routed were fielded at 3/4 strength, those that had suffered less were brought up to full strength. The captured gun, alas, was scratched from the planned OB. I allowed Blue to receive 2 squadrons, 1 of dragoons, 1 of mounted rifles and a battery in advance. The steam battery and General Zinn's brigade of 3 battalions arrived on turn 1. Red, whose army is way behind on mobilizing added a 1/2 unit of rifles, an over size elite infantry unit, 2 infantry units, a horse artillery rocket battery, 2 field guns, a squadron of Heavy Cavalry and a squadron of cavalry. The two under-strength infantry units from the first fight were initially kept off table as a reserve.

Red's subtle initial plan was to send infantry around the wood on Blue's left, send his cavalry forward to probe the enemy cavalry and assault the wall with elite infantry supported by artillery and the reserve infantry. In effect it swiftly became an attack across the whole front. Hmmm. Good thing Hector was elsewhere! 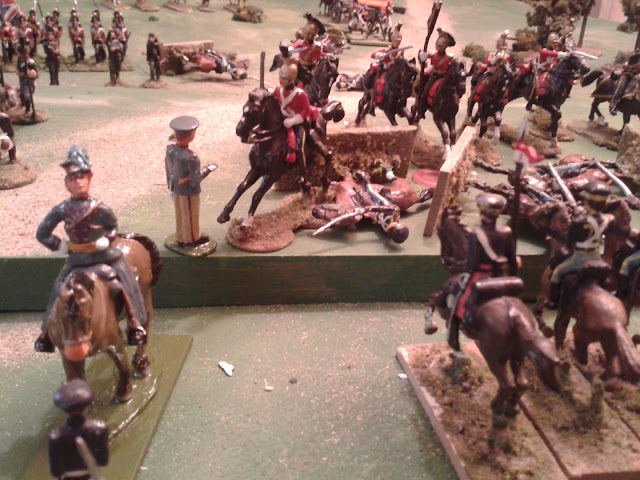 Lord Snooty is almost swept away by the pursuing Dragoon Guards but his batman stepped up smartly and halted the Red Cavalry to explain that His Lordship was a  Gentleman from a foreign country here as an Observer and by all rules of war, not a combatant.

The initial charge by the Director General's Bodyguard was a minor disaster with the DGBG being almost destroyed. A counter attack by the Princess Dragoon Guards, however, swept the Blue Dragoons away in turn, almost snatching General Scott  and the visiting foreign Anglian observer, Lord Marmaduke (aka Lord Snooty). Scott's intervention held the Dragoons in place but it was a scramble to reform a line. Luckily Brigadier Zinn was up to the task even in Scott's temporary absence. 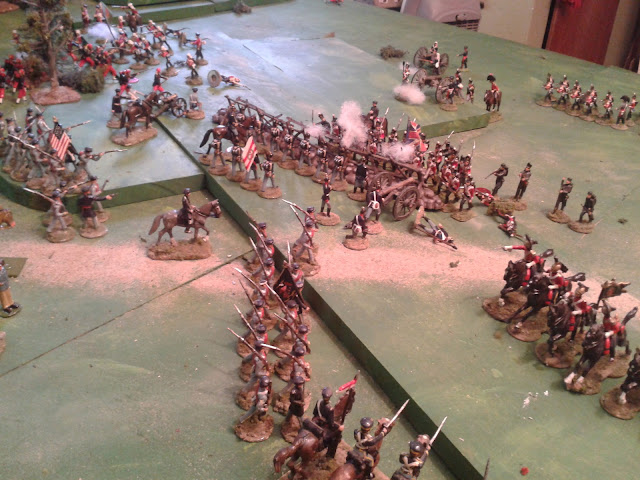 A new line forms as the Royal Fusiliers charge the wall.

At the far end of the table the Zouaves put up a tremendous fight supported by the steam battery and after a game long struggle, eventually repulsed the 2 units that had gone that way despite heavy losses. The struggle over the wall also raged for an extended period. 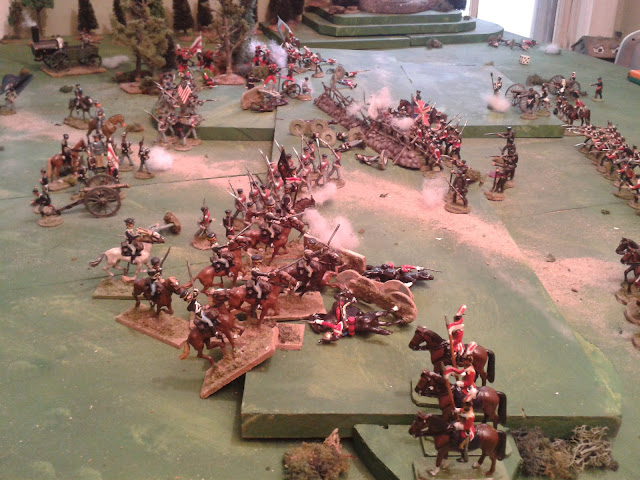 The seesaw cavalry battle continues but with fewer troopers each time. Behind them Red has finally carried the wall.

The arrival of Blue's reinforcements just as the flank and center caved allowed a new line and a counter attack. It didn't quite come to a bayonet charge but Red had trouble bringing his artillery forward and the combination of Blue's artillery support, a fresh brigade of infantry and some good dice soon had the battle looking very undecided again. Eventually Red's artillery came up and despite the Frontier Light Horse managing to repulse a charge of Lancers  with shooting, the Red cavalry was steadily working around the flank, drawing off Blue's infantry from the main fight. At this point I decided that if it was a campaign and I was Blue, I would probably  withdraw while I could. It wasn't though and on a closer look, Red had taken heavy losses, so I did my best to hang on and fight for a draw.  The Princess Dragoon Guards in their third charge of the day put an end to that hope capturing a gun and  overrunning General Scott and a battalion of infantry during the pursuit (not to mention almost nabbing Lord Snooty again!). 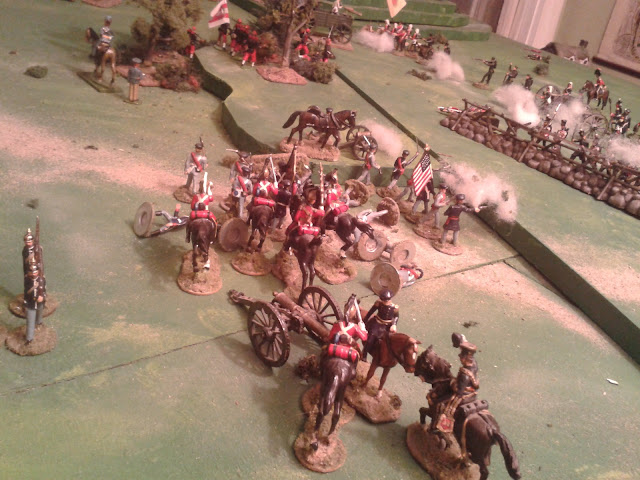 I had spent considerable time writing up my rough notes before the game and had caught myself starting to fuss and complicate  so I was a little worried that I might have blown things. Luckily it seems that I had caught myself in time and the game felt much like the first one. There was one old issue that bubbled to the fore. I like the 1/2 casualty rule because it means cover, for example, is always safer than being in the open because the maximum number of possible hits is reduced whereas when using a die modifier the odds of a hit are lower but the maximum  stays the same so a lucky roll ignores it, unless there are enough modifiers to make it impossible to hit!  The problem comes when you don't have enough dice to inflict 2 hits or 4 if, say, firing at artillery at long range. It also seems to be too steep a penalty for a minor melee advantage like a stone wall. One of the things I had caught myself tinkering with and stopped was a revival of the double hit on a 6 which causes some other issues and also makes the game less simple and straight forward. Halfway through the game I reverted from the 1/2 to the -1 for cover etc. as used in HofT and Rattle. It may occasionally lead to heavier than expected casualties but at least when a small group of Rangers bumps into a band of Indians in the woods, it will be possible for each to inflict a hit on the other.

The first game I played had 4 units per side and went well. The largest Atlantican armies I am planning will have about 20 units. This game saw 12 units against 11 in a straight forward fight. I have no doubt that as large a game as I can fit on my table would go smoothly and not take an excessive amount of time though probably 4 or 5 hours rather than 3. I was suddenly unsure though about how one of my typical petit geurre scenarios that MacDuff was supposedly written for would go. Trying a typical AWI/1812 ambush of a wagon train suddenly seemed like a good idea.