Now that the smoke has cleared.


I think that the operation has been a success but having decided to aim for Option 2, I seemed to have ended with Option 1 + 3/4 of Option 2.  In other words, the game played tonight was more like yet another version of Hearts of Tin so I'll still need the Portable Game for Cardtable & Toy Soldier games.

The difficulties of a variable format game are not insurmountable but look like they will need considerable work. The biggest one is how to handle "units" of varying size and/or the ability to "stack" units if using a big grid. My intention for today was to treat each stand as a unit and have rules that allow units of the same regiment to co-ordinate their activities. Explaining that and making sure its the best option is going to take considerable effort. It will also mean roughly 1 base sized squares/hexes and thus not a replacement for the 6" square grid that I used for Hook's Farm. So I opted to go with standard units for now but there is no reason why units of various sizes can't be used. It'll be how they get dealt with if using  grid that needs thought and testing.

Luckily Hook's Farm was in theory an early 20thC game and thus does not need to conform to HofT. I can also see myself using Bob's late 19thC game with my 54mm Nku Khu warriors (Zulus)  and their Red Coated foes). All of which gives me reason to hang on to some forces of old, small style 54's. (Whew! A lot of time, money and past fun not down the drain after all!). In effect, a replacement for the original Colonial MacDuff which is just plain bizarre, but I'll take it.

In the mean time, I have made use of some ideas from Bob's game and also used the experience and resulting  mulling about rules to make a faster, more dramatic game that is closer to my old Morschauser Meets MacDuff with the stuff that didn't work taken out and some better parts added in.


There were some unwritten rules and 1 or 2 rules that I changed on the fly that I will go back and  amend on the draft. Meanwhile here a very short report on the test battle. I lost track of how many turns I played, but they flew by and it was probably somewhere between 15 and 20 in 2 hours and a bit. 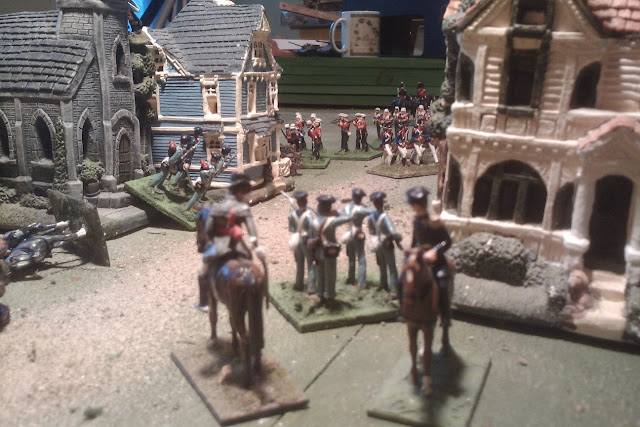 . The American rearguard clings to the edge of town as the General Scott orders his last Brigadier to withdraw.
Chance Encounter at Cordery Square, Oregon Territory. Those familiar with CS Grant's scenarios and Teasers will doubtless recognize the Sawmill Village or Chance Encounter scenario. I began with 2 equal forces of regular troops, British & American from the 1840's. Each side had a General, 3 brigadiers, 2 cavalry, 5 infantry, 1 light infantry riflemen, 2 batteries. (one British battery was rocket horse artillery.)

The game began with a cavalry clash East of the town which ended with the   US forces taking a licking, partly due to having suffered some accurate rocket fire before the clash. The Lancers threw back the Mounted Rifles then pursued into the Dragoons only to be thrown back. The GG Bodyguard then intervened to drive back the US Dragoons. The US cavalry fell back to the Western side of the town to act as a blocking force. Faced by growing forces of infantry infiltrating through the town and woods, the British cavalry also moved west.

While the cavalry clash was taking place, the US were able to seize the town and sent their light infantry through the woods. In part they got there first because they started slightly closer but mostly it was a matter of getting the initiative and good activation rolls when they needed it and on pushing their lead infantry. (On one of these turns the British general and 2 Infantry Brigadiers all rolled 1 pip each.) However, the US General had used most or all of his pips on pushing his lead forces forward and into the houses. (since he couldn't see into the town and occupying a house costs an extra pip, he needed 3 to get a unit into a house but having gotten to town, the Brigadier had trouble mustering 2 on his own to get units into the houses!). This meant his 2nd brigade was slow to move up and ended up diverting to cover the right  when the cavalry was driven in. The artillery had to move west of the town to get a shot and was very late getting into action. The British on the other hand, deployed early with both infantry Brigades and artillery in a concentration against the town. After pouring in fire to  wear down the defenders, they began sending in infantry assaults with cold steel which eventually took the lead houses but since they couldn't  occupy them without engaging the next   house in melee, they kept getting ejected.  The US forces lacked the strength to reoccupy the first row of houses so it was a bit of a stand off.

On the flank an artillery duel ended with the total destruction of one US battery. The British cavalry was slow to come up but eventually they pushed in and once again supported by artillery finished off the US Cavalry. At this point a rocket finally landed on one of the rear houses and took down the 1st Brigade Commander. The first brigade was now down to 1 leaderless regiment and the 2nd Brigade had started moving into town but was also starting to take losses. With only 1 brigade commander, 1 gun and 10 stands of infantry left to face 3 brigade commanders, a gun +  rocket, 15 stands of infantry and 3 of cavalry, it was time to retreat.