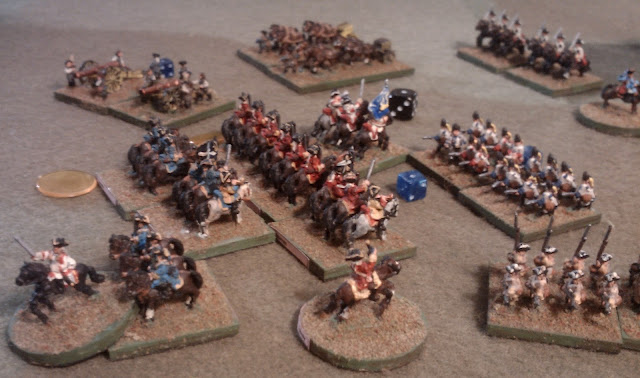 Vive Le Ross!
Yesterday I headed into Halifax for a game with long time friend Les. With great indulgence he agreed to subject his 10mm Pendraken armies to yet another version of Hearts of Tin(y). We set up some woods and a village, rolled for a random number of units, pulled armies out of the tins, organized them and set to on a 3'x4' table using cm instead of inches.

Once again, I commanded the forces of Bravance  (or Bravant as the Bearcats and Dragons like to call it) while Les commanded the Drakenburg forces.   I formed 2 brigades, an Advance Guard composed of 1 unit each of irregular Hussars, militia light infantry and elite grenadiers, a cavalry brigade with a Heavy and a Line regiment and an infantry brigade with 4 battalions and a battery of 2 guns. I established a line between some woods and the village with my infantry advanced the light troops and cavalry on my left and sent the Hussars on a raid around the enemy rear. Les had selected a brigade with 2 cuisassier and 1 dragoon regiments and a brigade composed of a battery of 2 guns, an elite grenadier battalion and 2 or 3 battalions of infantry.

The game progressed smoothly with my Hussars sweeping around a wood slightly ahead of the Dragoon regiment which had been dispatched to deal with them. On the crucial turn, I won the initiative and charged Les's battery in flank and rear while surprising his general before he could scamper for cover. As it turns out my irregulars just weren't up to the task and a drawn melee saw them slink away with their prize.  The Hussars spent the rest of the day dancing back just out of reach of the Dragoons, sending off the odd carbine shot to no effect and rifling the pockets of their captive.  (the motto of these black Hussars is "Dance like a Bee, sting like a Butterfly".) 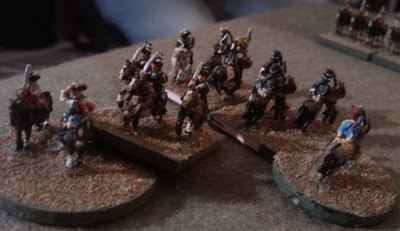 In the center the infantry came forward supported by cavalry with Les's troops severely handicapped by the loss of his General. At last I managed to advance into range with my Grenadiers, flip the initiative and get the first shot off,  a resounding 2 hits which  I followed up with a charge by my entire cavalry brigade. The Drakenberg grenadiers, somewhat shaken, whiffed and were ridden over apart form a few survivors (ok a lot of survivors) scampering for cover. My cavalry pursued onward and crashed into the Cuirassiers. The intitial rolls came up a tie but we each had a brigadier attached. I rolled first, "6", a hit! Then Les rolled "1" Wounded and captured!  (see header picture). A brisk little 2 hour game, probably 12 or more turns. Time for another! 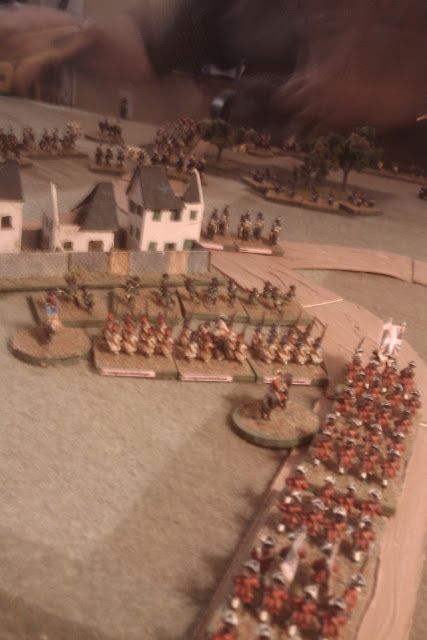 It appears to have been misty as the 2nd game began.
Quickly relocating the village and adding a road grid, we each selected 12 units (counting brigadiers) with orders to seize the crossroads. Both sides had to march on along a road running through woods. I kept my advance guard, added a cavalry regiment and traded my infantry for 2 battalions of Swiss. Les fielded the Stutz-Baerkatz with an advanceguard with Hussars and light infantry, a cavalry brigade of mixed cuirassiers and dragoons, an infantry brigade with Grenadiers, 2 infantry battalions, a howitzer and a battalion gun (which we quickly agreed on rules for) . 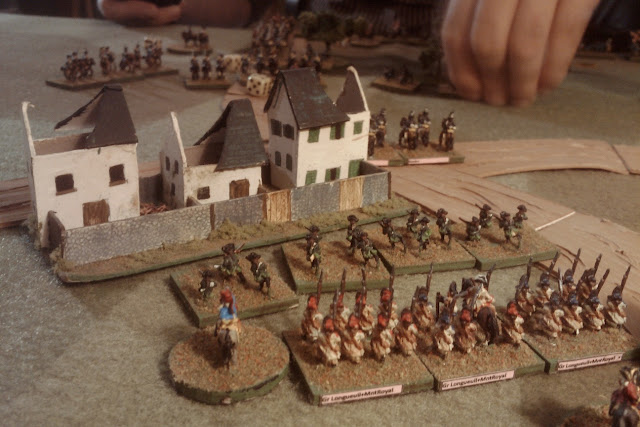 We both led with our advance guards but Les supported these with his cavalry while I trailed with mine, figuring that they would catch up. I managed to trip up a bit with my cavalry brigadier separated from most of his units by the woods and thus having trouble issuing orders (double pips needed).  Les's cavalry on the other hand, rode rather agressively into my advance, driving back my Hussars and light infantry before being bounced by the grenadiers. I managed to deploy my infantry and guns but then had to fend off a flank attack by those pesky hussars. For the rest of the game my guns and infantry held a gap between the town and a wood, taking pot shots at his cavalry and slowly whittling them down but completely pinned by the threat. 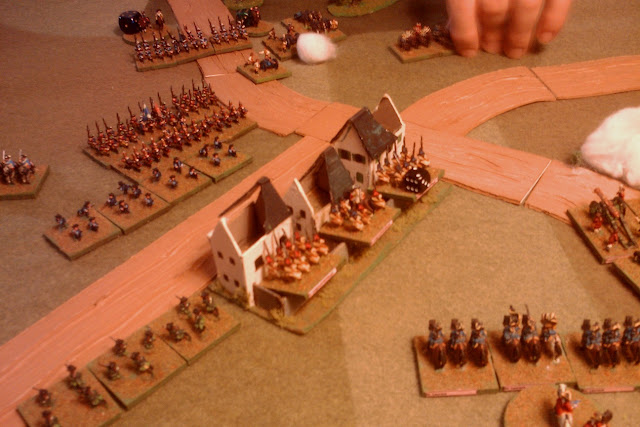 My grenadiers held off one assault  but casualties were mounting fast and eventually the Bearcats sent in their grenadiers with cold steel and the end was inevitable. 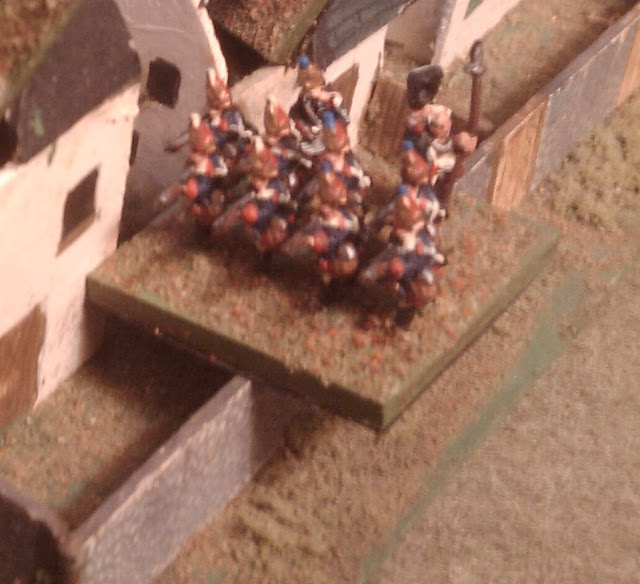 Two closely fought and very enjoyable games. Just the sort of thing Hearts of Tin was meant to do. A pitched battle with 3 times the forces would probably have taken about the same time. The games reminded me of how Morschauser Meets MacDuff games felt, back in 2003/2004, before I decided to fix it.

I had a big smile driving home.