Like Wolves Among Sheep, a test game of Gathering of Hosts.

For those who don't follow my Gathering of Hosts blog, I have recently incorporated some of the ideas from the revised Hearts of Tin into my ancients rules. This was their first outing. Logic dictated I do something standard as  a benchmark, Marathon or Platea perhaps so obviously, I opted for something completely  different.

I had been pondering the Cimmerian and Skythian conquests during the 8th to 6th centuries and so decided to pit a small force of horse archers against some local levies backed by reinforcements from a local noble or city. Since  I have been running a "sort of" campaign based on the wars between the Lydians and the Medes, I figured that  I might as well set it there. I wanted to test the morale grades as well as the movement and combat so pitted a force of 9 stands of mobile "regular" cavalry, all with bows against 8 stands of "levy" spearmen and 2 levy skirmishers reinforced by 2 "elite" medium cavalry, 2 medium infantry and 4 "regular" heavy infantry which would roll to arrive.  The attackers needed to break through and exit with over 1/2 their force or else break the defenders. They have the advantage of mobility and missile fire but their movement is hampered by terrain and the enemy outnumber them by 2:1.

Very quickly the rules require the sides to roll for initiative each turn then roll activation dice. Each side takes it in turn to move and shoot then resolve melees. All combat is by the stand, 1 die each plus bonus dice in some circumstances. Levies can take 1 hit, average or regular troops 2 and Elites 3. Small green dice were used to track hits.

In a mountain pass in Anatolia, there were 2 small border villages. The men were farmers and herdsmen not warriors and the old watch tower had fallen into decay, but the villagers were armed and ready to fight in their own defense. One April day, when  word came that the Medes had unleashed a raiding party of Skythian  mercenaries, the Headman ordered the menfolk to assemble while the women and children took the flocks and herds into the wooded hills then sent a messenger to the nearby Royal Garrison pleading for succor. 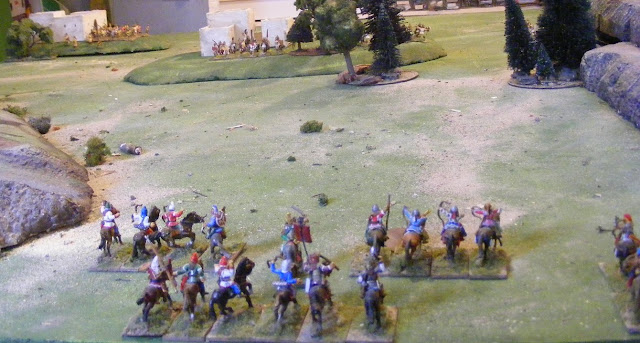 As the men from the 1st village watched the fierce enemy thunder down the valley, the second village mustered its men and set off to join their neighbors. Soon the arrows flew as the horsemen darted in and out, pulling back occasionally to rest their horses. Earlier than expected, the first Royal troops arrived and the villagers began to push forward to block any attempt to slide by. 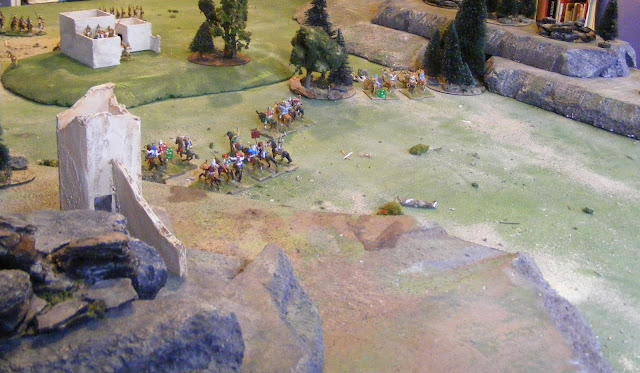 Seizing the initiative,  a detachment of villagers charged forward into a group of horse archers that had pressed too closely. A few horsemen were caught and pulled from their horses but the rest escaped and rode back. After the arrows and excitement only half the villagers were still fit for duty. (A tied melee with 1 hit aside, the villagers lost a stand and the Mede commander decided to pull back on his next turn to avoid the risk of losing a stand). On the other flank, fire from the skirmishers hit its mark and the Skythians pulled back to regroup, a pause descended on the battlefield.  (Again they wanted to rally hits but rolled poorly with minimal activations and unsuccessful rallies so it took several turns. If the reinforcements had been late, they would have pressed on, hoping to finish it before they arrived.)

As the Lydian King's men approached, the Skythians pressed forward again. The arrows flew thick and fast and the villagers threw down their spears and took to the woods. ( 1/2 casualties on a leader's command will drop the number of hits troops can take thus routing levies). In their place marched the dreaded Phrygian axemen on the Skythian right and the Lydian Lancers on their left. A flurry of arrows halted the cavalry but the axemen pressed forward. The Skythians were driven down the valley, shooting as they rode, occasionally being caught by a rush of axemen but  generally giving as good or better than they received. At last there was no room left for retreat so the Chieftain led a aparty around behind the Phrygians and the arrows soon did the work.  The Lydian spearmen had now taken over the defense of the left hand defile so the Skythian leader masked them and led a large party on a sudden dash to his right,  through the gap left by the fallen axemen. 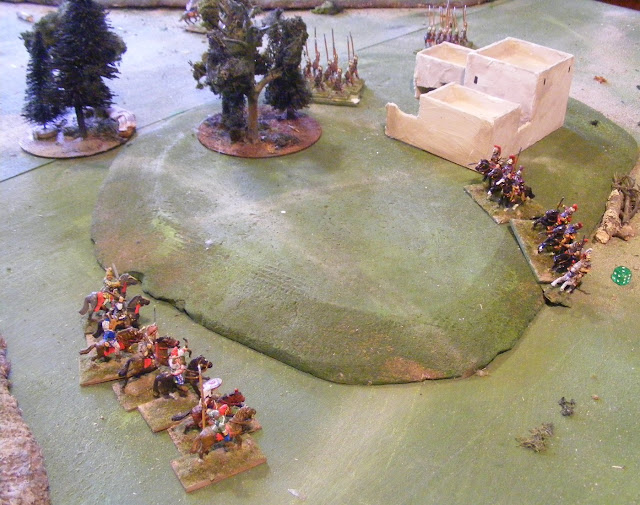 In a flash, the Lydian lancers charged across the field and disregarding the arrows, pushed the Skythian back through the pass cutting the light horsemen down.  (Taking advantage of a flip in initiative, the Lydian cavalry who had just finished rallying off 2 hits, crossed the table, taking 2 more hits from shooting and charged taking 1 more in melee, removing a stand but led by their general, cut down 5 horse archers taking off 2 stands  and leaving the Skythians 1 hit away from breaking).
The Skythians fled back through the defile. Their chieftain, steeling his nerves, gathered his men and keeping well back from the cantankerous horsemen, showered the enemy spearmen with arrows, dancing back out of reach. The hands of the gods seemed to guide the arrows and in short order the spearmen had had enough and took to the woods, leaving the King's general with a handful of troopers to withdraw and report their failure. (The spearmen has suffered 1 hit earlier and had failed to rally it off, on the last 2 turns, 3 stands of archers roll 2 5's and a 6 then 2 6's, the 5's would normally have caused hits, but not against heavies, the last set of boxcars brought the Lydian forces below 1/2 strength and broke their army).
_________________________________________________________________________________
Over all I was very happy with this first outing. I did make one tweak to the rules mid-game though. In HofT, I had ruled that light troops could be given a 2nd order instead of a faster move, here I gave them a longer move and a free single move if not ordered and allowed all units to be given a 2nd order. With potentially 32" light cavalry or 24" light infantry, it just got too crazy so I went back to the HofT model of standard moves. Instead of costing an extra order to move through difficult terrain though, I ruled that no formations are allowed in woods etc, thus making it hard to move troops. To preserve the ability of lights to function in this ideal light infantry country, I allow them a free move. This can be combined with an order to allow a double move as in HofT or used on its own.
Now its time for a bigger conventional battle, but its also time to test a small HofT scenario. hmm choices, choices.
Posted by Ross Mac rmacfa@gmail.com