The Siege of St. Lambert : Back story and Order of Battle

The origin of the dispute between King Michael of Rosmark and his step-mother, the Queen Regent, goes back to the vague terms of her Regency which could be read as meaning that she was to be Regent until the end of her days. The King's party, of course, maintain that her Regency ended when he came of age. in 2010.

The old army, which contained many foreign soldiers, tends to favour the Queen, herself a foreigner while the newer native Rosmark units follow the new King. The dispute surfaced in 2009 at the Battle of Notquitelobositz when the newly raised The Crown Prince Carabiniers and the Ostmark Hussars fought alongside MacDuff's Fusiliers with the Pragmatic Alliance while the Queen's regiments fought alongside North Polemburg. At the time, Prince Michael claimed that these troops were fighting in accordance of the old contract that had seen Macduff's fight for Alliance pay on many a battlefield.


After a brief clash at Belmont, the two factions came together to repel an invasion in 2011  But now, amidst plans for a retaliatory strike, conflict has broken out again.   The Queen has taken refuge in the city of St. Lambert, the capital of the Dowry Provinces. An interesting development is that both the old Queen's and King's Brigades appear to be split in their loyalties. 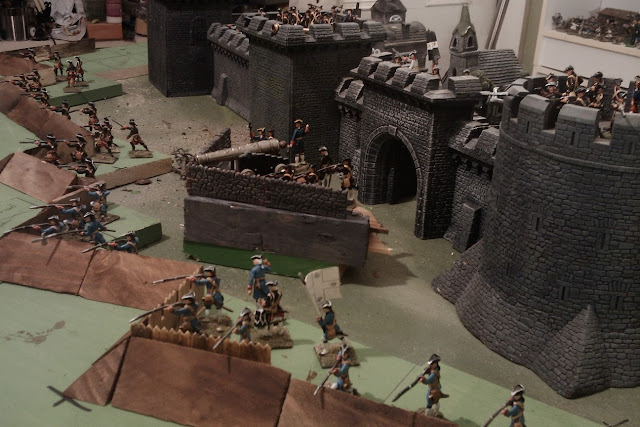 Having sent her cavalry out into the countryside, the Queen Regent's garrison is composed of the following troops:


9 guns,
3 mortars/howitzers
6 Artillery officers
20 gunners
3 Engineer officers
12 Sappers
MacDuff's Fusiliers (1 Grenadier and 3 Line companies)
The King's, Royal and Irish companies
The Pandour Light Infantry (these will not dig trenches but will man them)