I was very happy to get my old and new 30mm figures out for a game last week but really they were an uncomfortable match for Minifig 25's.  I expect to match them up again, but thoughts turned to the direction of "wouldn't it be nice to have a matching 25mm army designed around the portable wargame and Grant Teasers". (One of the pleasures had been that the scenario was useable "out of the box" with a unit being a unit.)  An army with 8 battalions each of 12 men plus a few 6 figure cavalry units is not a huge invetment of time and should be able to squeeze into less than 2 feet of shelf space. An allowable indulgance then.

It would be possible for me to produce a shortened version of les Compagnies Franches (aka Keith's) and to do something with some Prince August 25mm Waterloo models that were gifted to me. The thought of doing yet  another  1740's French army though was a non-starter (past ones having been done in 15mm, 25mm, 30mm and 40mm). Saxony or Piedmont both seemed like options as iir both changed sides during the 1740's but it didn't take long to realize that I don't really want to do ANY more tricornes, apart from finishing  off the last few Rosmark companies.

Since Ron has Austrians, Turks naturally came to mind. Now I have been wanting to do some Turks but was thinking 16thC in 42mm. That would be an army that might see use in some solo games and maybe once at a convention. It will probably still come but a little tester version  might be fun as long as it mostly costs time.

Looking at the Programmed Scenario book, if I shoot for some of the cavalry and light infantry heavy forces and we graciously allow the better Ottoman Infantry units to be European infantry with muskets and the poorer ones to be Native infantry with or without fire arms then something like 90 infantry and 25 cavalry plus a couple of guns should do. It shouldn't be difficult to modify PA Polish and French lancers into Turks. The small quantities wouldn't be worth a mold. A small offering of cash could maybe be spent on some Scruby 30yrs war Jannisaries and/or some Mamlukes.

Ok the object is 25mm opposition for Ron\s Austrians but once I have an 18thC Turkish army, well I've always wanted to do Napoleon in Egypt and started to do it once in 15mm and once in 54mm. Might make a handy, close enough, matched set of Portable Wargame armies.

So what about a bunch of  of musket armed infantry to start? Opinions seem to vary but I'm happy that some of the Jannisaries weren't wearing the traditional caps and that some local governors kept trained(ish)bodies of  local troops so a generic figure looking something like this might work: 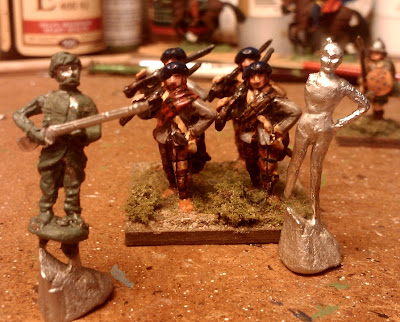 On the right is one of the dollies that were created as a midpoint when making my ECW Scots last year. I held him up to a Minifig and marked off the desired height. He looked pretty stumpy and even after filing, poking and prodding, the anatomy is rather off but after an hour's work he's starting to look passable to me. (I think part of the top heaviness is the angle of the camera but I'll double check that). Actually he's beginning to bear an uncanny resemblance to a sample Peter Laing 15mm figure I once had. hmm Oh well, I did rather like Peter's Egyptian Campaign range and meant to buy more.  Hopefully tomorrow I can finish him up and with luck by the end of the weekend I'll have the mold made and the first dozen ready for painting.
Posted by Ross Mac rmacfa@gmail.com

Email ThisBlogThis!Share to TwitterShare to FacebookShare to Pinterest
Labels: homecast