The Ferryman asked a couple of questions about what I do for undercoating plastic figures and about the mix I use on my bases. Since I had nothing else to say and someone else might be curious, I decided to put it in a post.

As widely recommended, I scrub plastics with hot water and dish soap then I undercoat in white gesso, mixed with a bit of paint to avoid any glaring white spots. The colour depends on what I'm painting but usually some shade of brown, often burnt umber, or blue. I used to undercoat my 54mm plastics with acrylic matte medium but this is cheaper and seems to work well as long as I have the patience to let it dry over night. I know some guys swear by Krylon primer for plastics and even more by some product they don't seem to sell up here that is used for rubberizng tool handles. I don't have anywhere I can use sprays inside and its usually too cold, too damp or too windy outside so have gotten away from them.

In case I haven't mentioned it, for the last 30 odd years, I use craft acrylics pretty much exclusively, mostly Ceramcoat but some of the others as well.  Probably explains some of my variable results but the price is right and I'm usually happy with the result. Since they don't have specialized military colours, I choose something close or mix. The khaki Russian uniforms were made from Burnt Sienna and Avocado Green. Drybrushed highlights had a bit of yellowy tan mixed in, shadows were done with thinned burnt umber. No idea which tan I nabbed this time but then, I like a little variation on my figures, looks more natural to my eye.
(Some of you are probably thinking, "what highlights and shadows?", well I prefer subtle over drastic so they aren't terribly noticable, but they do affect the final look (but if I miss a spot, that doesn't show too easily .)

Normally I overcoat in acrylic varnish to protect the figures but all I have at the moment is Gloss and these call out for Matte so I've asked them to please be careful until I restock. Actually, as long as the paint hardens well before being handled (say 24 hours even though the paint is dry to the touch in minutes), I find it pretty tough even without varnish.I wish I could remember how I treated the Airfux ACW guys   back in '83. They spent 20 years or more tossed into my spare bits and pieces bin and re-emerged to answer the call with hardly a scrape, even on the musket barrels. The ACW figures were the short lived MPC  releases and were in a fairly hard plastic, not that different from the Zvezda WWI Russians and not like many other plastic figures.


My flocked bases have two main components (I undercoat the wooden bases with a coat of brown paint just in case I miss a spot but I'm not counting that). First I coat with white glue and dip into a bin of traction sand. This is pretty must dirt coloured with a variety of textures so I don't do anything to it afterwards. If I run out during the off season, some bags pf play sand will work but in either case, check the colour in your area. I have seen some atrocious yellow sand which would have to painted.I was also horrified one winter to find that the new rage was for coarse sand which was like boulders for 20mm guys. 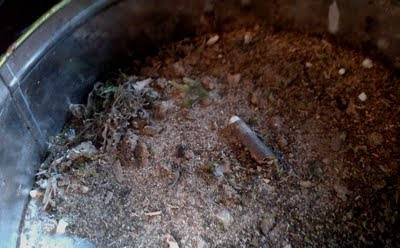 Sand and debris. This is the same stuff I scatter on the table for dirt roads and sweep up afterwards and return to the can. It gains character as time goes by.
Once that is dry (ish), I dab bits of glue on, trying to leave some bare spots for contrast. The drier the locale, the more bare spots, then I dip the bases into my 'special mix' and gently blow the excess off, back into the can. This also helps the grass bits stand up a little. The "Special mix" varies from month to month but is basically a blend of woodland scenics grass, medium flock in at least 2 shades and course flock. I dump some of each into an old candy tin and shake it up. As it gets low I top it up from one or other of the containers and it picks up some sand and grit from the bases as well, so its never quite the same and never completely different. Looks better on the 20's than the 40's where the grass is too short. The important things are, its easy and its not uniform so it looks more natural. 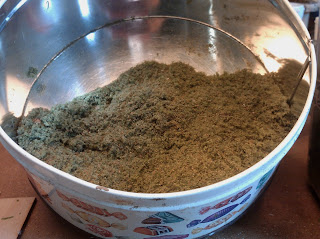 Another endorsement, bottles of Woodland scenics. These are a bit pricey for me so I'm not sure they'll be replaced but then, these were bought in 2006 in memory serves and I am painting my toy soldier bases instead of flocking so I probably have 5 years or more before I have to worry about it.
The real key in all cases is that the method's are fast and easy. If it weren't for procrastination, I'd call laziness my prime attribute.
Posted by Ross Mac rmacfa@gmail.com