Suddenly, out of nowhere, a Tachanka appeared

Tachanka's are iconic Russian Civil War stuff, no self respecting RCW wargame army should be without one of these horse drawn MG carts.  BUT, they weren't  exactly top of my ToDo list. There are some more pioneers, artillery crews and Grenadiers for the NQSYW siege in July, the other 1/2 of my Rose Ethiopian archers, a few extra Royal Marines to flush out a unit and some Mexican Dragoons, or maybe the King's Dragoon Guards, I haven't decided yet. 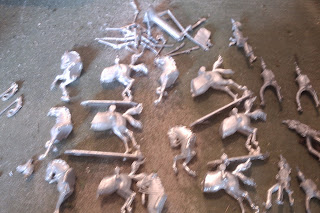 40mm Zinnbrigade Napoleonic British Dragoons, cast up and waiting patiently to find out who they will be when they grow up.
So, it was no real surprise yesterday to find out that suddenly, having a 1/72 Tchanka was the most important thing in my life (hobby wise).  Now I'm sure there are some marvelous 1/72nd models of these out there but that would require mail order, waiting 4-6 weeks for delivery and money. This is a tertiary, sideshow of a collection  and an immediate itch. I'm sure a talented modeller could research the subject carefully and scratch build one  but I'm not a modeller by any stretch of the imagination.  Luckily for me, as a "toy soldier guy" , I don't need an accurate model, just something that looks like its grandmother once met a Tchanka on a warm summer's evening, which is to say, something that reminds people of a Tchanka and looks like it could serve the purpose on a wargames table.
The sort of Tchank I am most familiar with is the type that looks like a Russian sled but with wheels and an MG. I pondered cutting the fenders off a $ store armoured car but it all seemed a bit much. Luckily I found this picture on wikipedia:

Looks more like an old 2 wheeled MG carriage hooked up to a limber than what I think of as a Tchanka but I just happened to have a couple of limbers in the spares box (The Italeri ACW limber looked too fiddly for my modelling ambitions). So in a matter of minutes I had cut a piece of cardboard and connected a WW! RHA limber to an ACW one, added a deck and remounted an mg, primed it and this morning slapped some paint on between chores and voila! 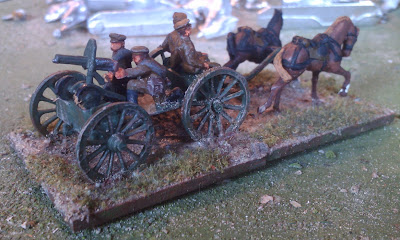 Rough and ready but serviceable, cheap and quick.
Posted by Ross Mac rmacfa@gmail.com

Email ThisBlogThis!Share to TwitterShare to FacebookShare to Pinterest
Labels: 1/72, RCW