I was planning to try another MacDuff game this week  but I've been discussing aspects of the 18thC Portable Wargame with Ron inbetween sculpting Turks and Albanians  (ok just 1 of each but they will be legion if the mold works). Neither Turks nor 4" hexes are ready but I had hexes on my mind so I put out the almost 4x6 Hotz mat.  I meant to get out my 1812 40mm guys but some how the mat looked more like the steppe in one of the seasons in between grass and snow, and anyway the 20's fit the 3" grid better than the 40's do. The 19thC version of the game was what was in my mind and since it has all the relevent bits apart from the odd armoured car, (easily imported from the 20thC game) thats what I used.

The scenario was Crossing Point from Programmed  Scenarios. This is essentially a small force defending a bridge with variable reinforcements. Between the variable maps and variable arrival times and locations for both sides, this scenario can swing between well balanced to no hope. To even things up, I chose the map, opting for a version where there is only 1 bridge and that located beside a small town. The defenders reinforcements come on close, the attackers come on about as far away as they can. Times are given in 15 minute intervals so I played each turn as 15 minutes. 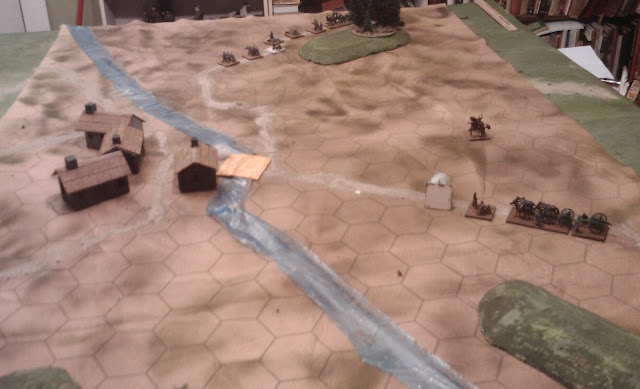 The Whites began with 1 field gun, 2 rifle platoons and an HQ on table. The riflemen & HQ were posted in the houses while the gun deployed directly behind the bridge. One of the rifle platoons was in the leaad house so that any Reds crossing the bridge would have to attack it in its fortified position. Off table were an MG, 3 more infantry, another field gun and 2 squadrons of Cossacks. Reinforcements would arrive at 10:00 or later by rolling a 6 on 1 die. Each unit rolling independently.


The game proceeded quickly as the Reds pressed down the road. Finally at about 10:am the White field battery was able to open up, destroying a platoon of Red riflemen just as the first platoon of reinforcements arrived. 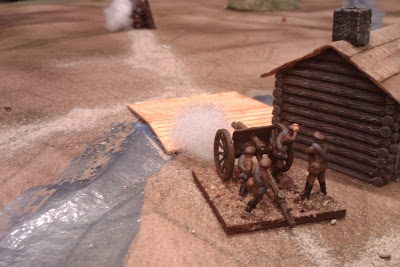 Opening shot of the game, Airfix 18pdr with Hat WW1 Russian crew, Pegasus log cabin.
Not to be out done, the 1st Red battery unlimbered and on the next turn silenced their White opponent while being pinned themselves. As troops on both sides continued to trickle towards the bridge from either side, they turned their guns on the first house and on the next turn they leveled it and the platoon inside (uhoh). 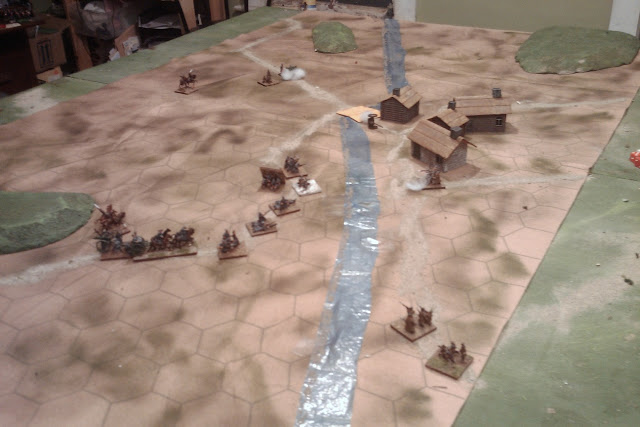 Is that 3 hexes? Holy C***
As White scrambled  to move up the last of the original platoons, the Red Cavalry galloped over the bridge and into contact, swinging their sabers. This was the first test of battle for the Zvezda Regiment. Down went the dice...the red one turned up 6, a miss!, the white turned up 5, a miss! no wait +1 for the HQ which was adjacent, a HIT! The bridge was saved! 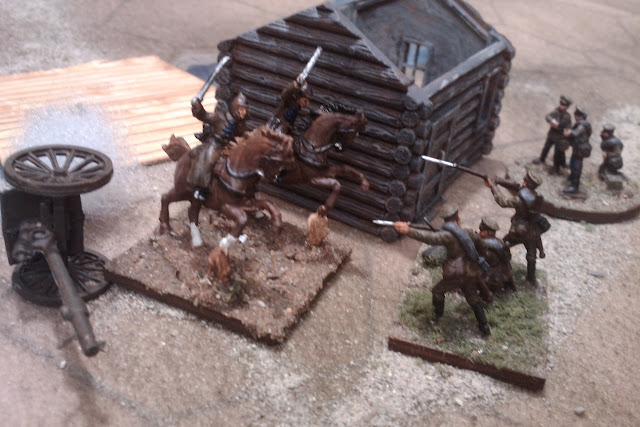 The moment of truth. Zvezda WW1 Russians shoot down some Orion Red Cavalry while a Hat command group steels their verves.
As more white troops poured onto the field, the Whites were up to 3 dice and rolled ..1 pip! Oh well, enough  for the jubilent infantry to occupy the lead house and make themselves cozy. For the rest of the game, the Red artillery shelled them but never managed worse than a pin.

As more White troops  rushed up, a fierce fire fight broke out across the river. Both sides took cover but first the 2nd Red gun was silenced (drat, too close again!)  and then the infantry was slowly eliminated until finally as the first Cossack rode onto the table, was pinned, and whipped their horses to cross  over the bridge and ride down that annoying Red machine gun, the reds dropped below 50%  and now being outnumbered, withdrew. 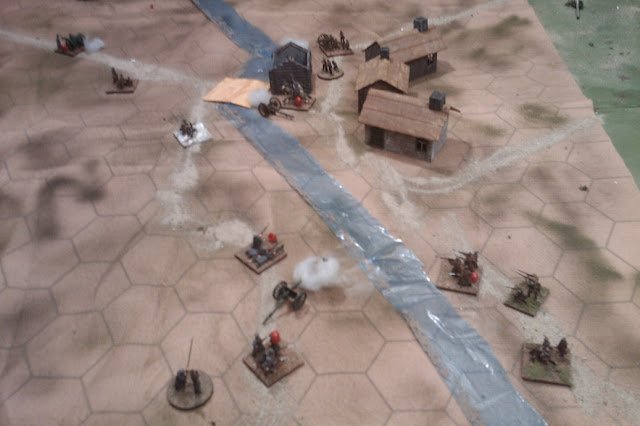 Better dead than Red say the Whites. Stelitz, Hat and Zvezda Russians.
A brief but hotly contested game which could easily have gone either way. The latest tweaks to shooting and melee scores made a big difference and the game flowed well. Its hard to advance under fire but not impossible and assaults though dangerous can work if you line them up in your favor, or if you're lucky. The temptation was to reset the table and try again. Mind you, I found the game even more fun when I had a live opponent. Its more a case of the rules enabling the game than being the game.

** Post script
I was just reviewing thing and realized I made a slight, inconsequential for this game as it turns out, error. Since Bob extended rifle ranges by 1 hex, I assumed that MG range had also been extended by 1 so that they would out  range rifles. Not so, rifles and MG's are now the same range and the same firepower, and I just realized, there is no restriction on them attacking so since they have the highest combat value, they are the ideal shock troops. Not what I expected, I'll have to think about it (and toss it to Bob) but my initial thought would be to up their range to 4 hexes, the same as light artillery, and to reduce their close combat value so that one isn't tempted to use tripod mounted machine guns to spearhead a close assault. The longer range and the new pinning rules would make them hard to attack with infantry.
Posted by Ross Mac rmacfa@gmail.com