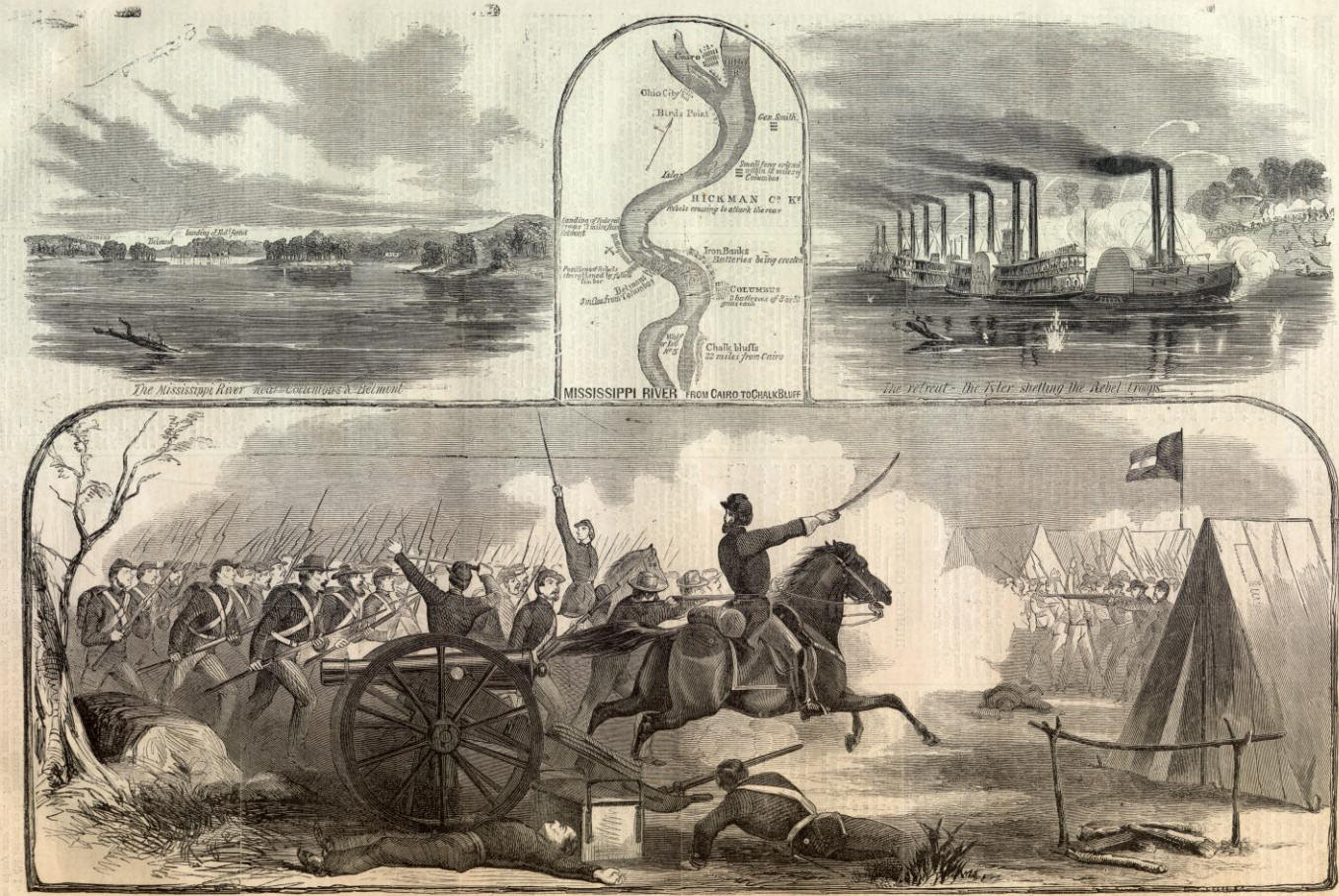 BATTLE OF BELMONT, CHARGE OF THE TWENTY-SECOND ILLINOIS REGIMENT, UPON THE REBEL BATTERIES.—SKETCHED BY MR. BILL TRAVIS for Harper's Weekly. Illustration borrowed from http://www.sonofthesouth.net/leefoundation/civil-war/1861/december/battle-belmont.htm which has the full article.


I got a chance to drop over and visit my friend Jerry on Saturday. Its getting close to a year now since out last game at which we decided that the ACW in HO/OO (well that's what the boxes used to say right?). A busy year full of distractions for both of us. He chose to work on all 100 Reb infantry at once and they are looking good as they near completion but not quite ready for the field yet. His new plan is to start sorting the nearly finished figures into regiments and finishing them one at a time while borrowing my Rebs to get a game oin the table before long.

Having the advantage of starting with two opposing forces already painted and just needing a bit of rescue and restoration to be table worthy (not to mention being what one might call obsessed with the hobby), I have an initial force of 3 Generals, 10 small Federal regiments (or 5 big ones), 2 batteries and a small regiment of cavalry ready for service.   Rather unusually, I started out without knowing exactly what I was putting together. Instinct said  20 man units and having a bin of mixed Reb & Federal figures from which to produce a Federal army, a Western army seemed to be called for since Yankees in slouch hats seem to have been more common there than in the East (as in the picture above).

The Federal Army so far. A mix of figures painting in the early 80's and today, recently based to a common method. Largely Airfix but with a few interlopers including a British attache/observer.  I am considering an over spray of matte varnish to bring the various painting and finishing styles together.

When I was painting 15mm Rebs in the mid 90's, I did some reading on the Army of Tennessee but very little on their opponent and most of my attention was focussed on the Valley and Gettysburg campaigns. So, something new to dig into. I did read Grant's memoir's last year and have dipped into the one unabridged volume of Battles and Leaders that I have (Much better than the abridged version that I originally read).
As a consequence, I have an obvious starting point at last.  Considering that I live on the Belmont Road, in the community of Belmont, West Hants County, Nova Scotia, and that Grant's 1st battle in the Civil War was the Battle of Belmont, this seems like an ideal starting point.

Now, my army is actually going to be the Army of Kennetcook, defending  Hants County against those King's Count rebels, but that's no reason not to borrow historical US regiments. Grant's little army was composed of 4 Illinois (22nd, 27th, 30th, 31st) and 1 Iowa regiment of infantry (7th), 2 companies of cavalry (possibly fighting dismounted as they seem to have arrived by steamer like the rest but we can comfortably ignore that possibility)  and a light battery. I fully intended to organize my units into 3 stand regiments and 3 regiment wargame brigades with 1 flag per brigade but I have ended up at this point with 4 1/2 flags and 30 stands of infantry which sort them selves into five 6 stand regiments each with a flag, one marching, one charging and 3 firing (ok 1/2 of one those is standing at attention in reserve).   My 4 guns are possibly a bit of over kill as is 3 stands of cavalry but close enough, easier to have too many troops than not enough. 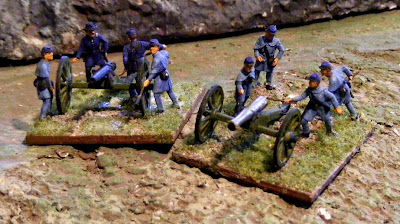 The newest addition, a rather rushed Italeri battery in cut-off great coats, a stray Accurate gunner and an even strayer metal barrel from who knows where, used to convert 1 gun to a rifle.
There is, however, the small matter of gunboats and steamers. Always tricky with boats when dealing with 15mm+ figures unless doing skirmish games. From a naval gaming POV, each boat deserves to be a unit in a small action but if done to scale with the figures, a gunboat like USS Lexington should be nearly 30" long if my calculations are right but that would be longer than a rifle shot from stem to bow. If done to ground scale, the whole fleet should fit into an area of  perhaps 8" or 10". Obviously some compromises and artistic licence is required. I will probably go for one representative toy gun boat and one representative toy transport or maybe two.