At the "Heart" of the Matter 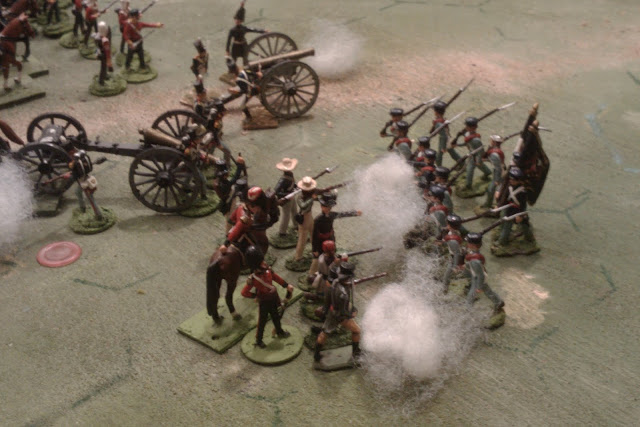 Smoke from musket and cannon fire have fogged up this cell phone snap of the Righton militia covering the retreat of the Centerville Battery earlier tonight.
Last winter, I put away Hearts of Tin after getting confused over issues  arising from the Portable Wargame, the benefits of using a grid, my confusion over basing, organization and what I was planning to use the rules for.  Turned out to be a smart decision. Those other matters needed clarification first. After several months of pondering and experimenting, there came the MacDuff to the Frontier game just reported. After a day of further ruminating on the matter, and reviewing old battle reports, comments and blog entries, suddenly, all became clear!

In no particular order.

Now the sudden clarity issues:
Conclusions and Action Plan?
1. The War of 1812 should continue as a historical project at 1:10 with 8 or 12 man "companies" as the basic wargame formation and a ground scale of about 1"=15 yards. For now it will be a mix of styles but I hope to replace all the chunkies over the next 5 years.  I will include enough figures to do 1837 Rebellion skirmishes as well. Rules may include MacDuff, HofT and the PW (a 12 man unit on 15mm bases will fit in a 10cm hex)
2. The Oberhilse Faraway campaign will continue as an OS game with 20 man battalions at about 1:30, a ground scale of 1"=25-30 yards and using Hearts of Tin as rules. The Faraway Army will be dressed in British style hot weather uniforms suitable for India and will include sepoy battalions.  The Oberhilse army will continue to be a mix of Am-Mex War, Danish and Schlieswig-Holsteinish troops. The un-named native state over the mountains will be likely be affected by Muslim connections and have adopted turbans and the like, though this is not yet firm.
3. HofT has already had the organizational change written in as well as having been updated with the new, simplified  Ordt and simplified combat and movement that I experimented with this summer when trying again to convert MacDuff to a battalion game.
The first 9 turns of the 2nd test game have been played (and enjoyed) and a short report will appear in a few days time when I have time to finish the game. Hopefully by them I'll have found new batteries for my camera.
Posted by Ross Mac rmacfa@gmail.com