Last time on BGotM, the forces of the Republic of Oberhilse had invaded the Kingdom of Faraway. Rushing to defend the border, the Queen's troops under Brigadier McDonnell have arrived at Centerville and begun deploying.

Quickly assessing the situation, McDonnell decided that the Republican forces consolidating their hold on Righton were too strong. The York Volunteers were still disputing Lieuton so a company each of the Royals and the Green Tigers  were sent hurrying up the road to reinforce them and take back the hamlet. The company of the Young Buffs were deployed along side the guns and cavalry to defend Centerville.

An order was sent out to the Centerville Battery to fall back on the main defensive line. A prompt move by the guns would see them safely behind the Buffs. Alas in all the confusion the Buffs failed to get the order to advance while the gun crew was slow to bring the gun out of action and limber it. If the enemy were to seize the intitiative, the gun was at severe risk of being ridden down.

Sure enough, the Blue Dragoons appeared through the  smoke. (Out of 18 turns, Blue won the initiative 14 times, no ties).  Over the hill, B Company of the 3rd Regiment had finally charged the Hillside House. The York Volunteers put up a fierce struggle but as the fight continued, they suddenly collapsed and as the Royals deployed, a stream of militiamen poured past them, heading home. Sending an urgent order to Colonel Larsen and his lancers to save the guns at all costs, MacDonnell raced across to rally the fleeing militiamen. 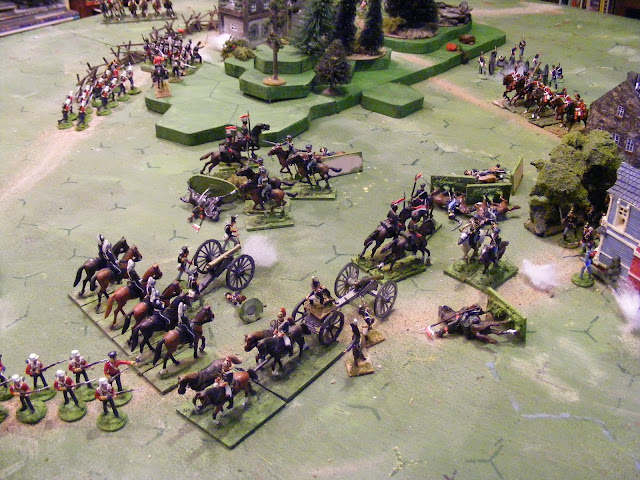 The Faraway forces in crisis.
Larsen's Lancers charged bravely and punched above their weight but the weight of the enemy cavalry proved too much and they were scattered. The guns however, were saved. As the Republican cavalry began to rally, a whiff of grape (sic) from the Queen's gunners, sent them galloping to the rear. 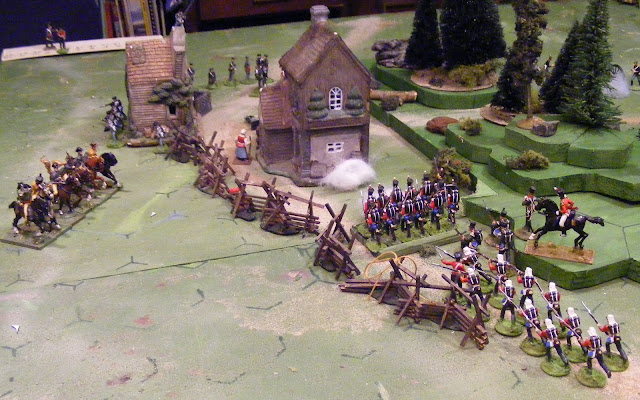 MacDonnell rallying the York Volunteers
As the Redcoats pressed on past the retreating militia, MacDonnell rode amongst the militia, calling out for them to stand firm. A rump of the volunteer company fell into ranks were sent back to hold the town. For the moment the crisis was over. 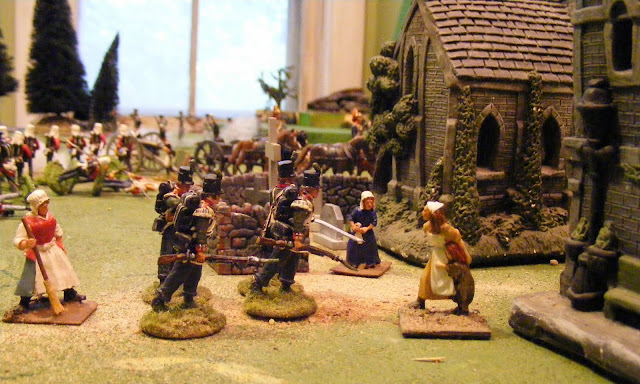 A shame faced group of Volunteers runs the gauntlet of the town's women.
Across the field, General Scott surveyed the field and wished the table was still a foot wider. He was going to having trouble getting through the defile between town and hill. Deploying his guns covered by the cavalry, he ordered The Blue Guards to march through the town, sending their attached Voltigeurs around the town to flank the enemy guns. The 1st Infantry were ordered to leave C company to hold the village while the rest of the regiment moved through the defile. As he rode forward to supervise the deployment, disaster struck. A blast of cannister tore into the 1st Infantry as he joined them, throwing Scott to the ground, covered in blood. As he was carried from the field, the Blue Guards deployed and seeing the enemy at hand, opened fire on the Buffs. It was a natural move, but one which the  veteran Colonel knew better than to make.   The plan had been to advance to fire a volley then advance to close range. With their General down and under a hail of cannister, the officers were unable to stop their men from firing and resume the advance to an effective range. (A unit which fired or fought in melee but which has a general within 12" will obey an order to advance on score of 2 or better but needs 4 or better to advance a full move. Without a general they need to score 1 higher). Before long the line started to waver then as the enemy  cavalry charged, the Guardsmen broke and ran back through the streets of town. 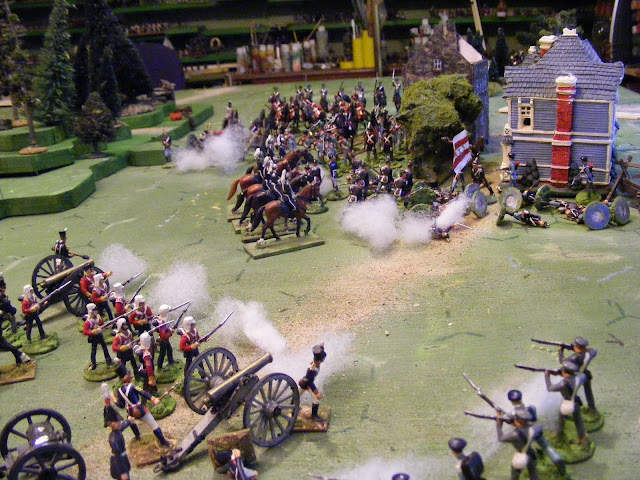 The Blue Guards are driven in.
Now, thought MacDonnell, " the Royals have retaken the Hillside House, the Tigers have seen off the Light Horse and Voltigeurs and the way to the General Store is open. if I can just hold the initiative, I can wheel the Centreville battery around and see off these pesky Voltigeurs on that flank". But it was not to be. As the Peipur Tigers charged forward against the Bodyguard, the Voltigeurs, who had slowly crept closer to the flank of the Battery, suddenly charged. Quickly the gunners ran back behind the Buffs as these wheeled to face the riflemen. A brisk melee ensued before the Voltigeurs broke and ran for the woods.

As the Republican guns resumed their counter battery fire, the Peipur Tigers suddenly emerged  from the rear and with bugles blaring and charged forward. The Bodyguard wheeled and spurred to meet them. A clash of anti-titans, vying for the title of least effective cavalry unit in existence. It was a near run thing but even the fabled Tigers were unable to lose to the Bodyguards. The remnants rallied back while their opponents streamed off the table. Taking advantage of the Buffs disorder after the repulse of the Voltigeurs, the badly battered Blue Dragoons charged forward. The odds were 2:1 that they Buffs would be ridden down but calmly these tough veterans formed square and the Dragoons pulled back. 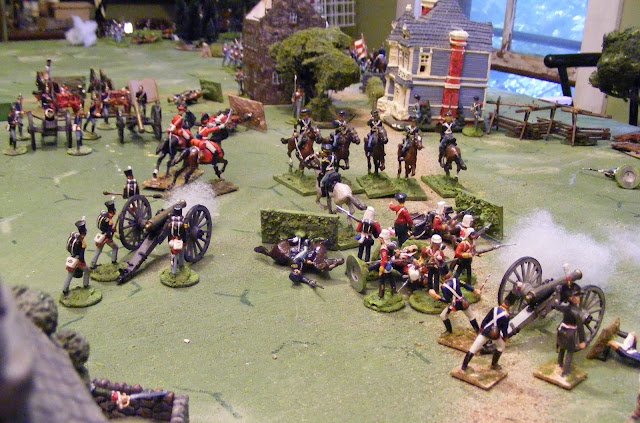 The Young Buffs earning the honours of the day.
As the sun sank in the  sky, the two armies paused. All that stood between the Republic and Centerville  was a battered company of infantry and 2 guns. The Republican army could still muster 5 battered companies of infantry and 2 guns but the infantry was still rallying behind Righton and it would be dark before they could push an assault. Even then, they were not fresh enough to be relied on to push forward and take the guns unless their own battery could win a artillery duel and that would take time as well.

In Lieuton, the battle still raged. The Royals, ensconced in the Hillside, were trading fire with the 3rd Infantry while the Green Tigers stood in reserve and watched, ignoring order after order for reasons that have yet to be given. At last, as the Royals were driven back by the volume of fire, the Tigers stormed forward, driving the remnants of the 3rd Infantry before them. Lieuton was clear of the enemy.  A costly fight for both sides but the Republican forces had no real choice but to retreat under cover of dark.  Every one is sure that they will be back, and in greater numbers. 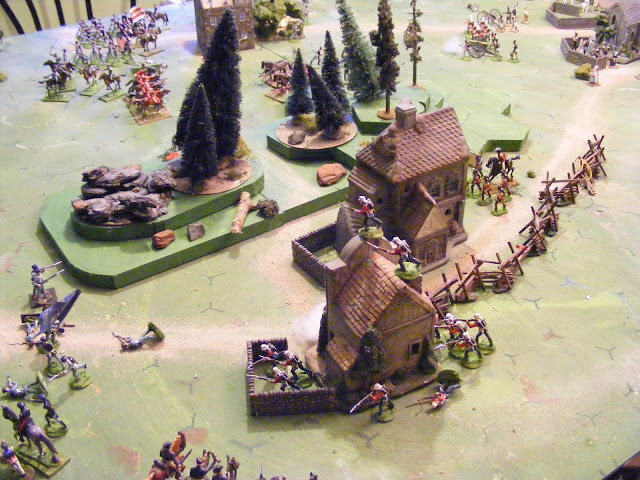 As I said yesterday, this game has helped me remember why I used to enjoy MacDuff to the Frontier games. It also helped me accept that the attempts to change it into something else were misguided. The current version works well but since it has been done in a hurry, it has not been thoroughly checked and I ended up making up various rules and interpretations as I went, and relying on unwritten conventions and custom. This is just a matter of thorough revision now that the basics are firm again.

The replacement of a control check and variable moves by a better control/orders check including a 1/2  move delay result and fixed moves, worked really well. It gave a similar over all level of uncertainty, especially since my dice seemed to have an abnormally high number of 1's on them. (and unlike the Initiative and Melee rolls, these were not predominately a Red phenomena).  The improved shooting chart worked like a charm and the Rally rules worked like originally intended.

However, while the game was fun and exciting at times, with more tactical detail than I have been used to dealing with, the return to roots brought back the original issue. This is a medium sized scenario but it took me over 5 hours to play the allotted 20 turns, and it was only one Brigade a side. One of the issues is that it is not easy to remove units from the game entirely. Its possible, especially in melee but generally units can be driven back, rally and come back again, or at least hunker down somewhere safe, not a serious threat but not something to be ignored and forgotten.

For the wars the rules were meant to be used for, this is an entirely proper thing. In game terms, however, unless one side can follow up successes and mass decisive numbers where it counts, games tend to drag on even though each turn goes quickly. Scenarios need to have some form of establishing victory and an endgame condition other than destroying the enemy. This can include time limits, casualty limits, objectives like blowing a bridge and other more clever things.

For the War of 1812, using a scale of about 1:15 with battalions of 3 or 4 eight man companies, I think MacDuff will still work well and I intend to finish polishing them with that in mind. A game like Chrsyler's Farm can probably be handled in a  3-4 hour game and a battle like Lundy's Lane go on well past dark until both sides are as exhausted as the historical armies were.

For my Faraway project, there is a lot of potential for this approach for a campaign. Room for personalities, names of officers if not men, detailed narratives and so on but I'm not sure this is the route I want to go. I am attracted by being able to make double use of some of the troops and I can certainly justify small War of 1812-ish games, but this may also be an opportunity for me to separate them, even if I do replace my existing shaded, chunky 1812 troops with glossy toy soldiers. A common basing system, compatible unit organization and figure style might allow some double use of some figures where needed or useful. There is something to be said for 1 of the projects being set up for fast paced games with bigger armies. (Bigger in theory as opposed to the number of figures deployed).

A Featherstone/Morschauser sort of game with 20-ish man battalions with rules that allow a game of this size to be played to a finish  in 2-3 hours may be what is needed. I'm currently reviewing Morschauser Meets MacDuff, Hearts of Tin and the in between versions of MacDuff  (eg Plattsburg and Rosie's) that I had played with looking for something that might work with individual figures for maximum compatibility. Having 1 element based campaign (Faraway) and 1 figure based one (1812) is an option but not my first choice, not now that I have finally found bases that I like and that work! (check out the pill shaped flexible steel 15mm wide bases used by the Royals in the pictures above and in the last 2 posts.)