Be careful what you say

Yesterday I wrote that I was sending out the fiery cross to summon my 25mm Scots to war. I was expecting my own lads to answer the call. I wasn't expecting the call to reach across the water. Imagine my surprise when a troop of Highland Volunteers showed up at my door this morning! (25mm Minifigs not real live ones.)

On the left my 35 year old Scots, on the right, the new arrivals.
Turns out they hadn't technically come in response to my virtual Crann Tara. They arrived due to the generosity and thoughtfulness of Tim Gow of Megablitz fame and came originally from the collection of the late  John G Robertson. I didn't know John but from what I have read on Tim's blog about this veteran gamer, it is an honour to have some of his figures join with my own. The specfic figures sent are especially welcome. This year, a group of local gamers decided to play some 25mm ECW games. I had a handful of old Minifigs dating back to the mid-70's, not enough for a whole army. Money is in short supply and the old figures are as short as I am compared to the various hard plastic and metal figures being gathered, so I sculpted and cast a regiment of lowland foot and rebased and refurbished my old Minifigs to form a regiment of kilted pikes and a unit of highland archers. I was short a few figures to round out the unit of archers and unsure of how to fill the gap. Gap filled! 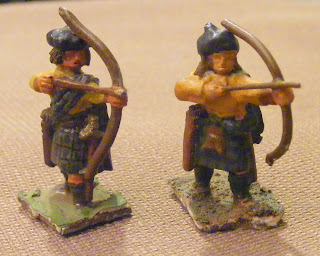 Even better, 2 of the archers are the older ECW range of S vintage. Lovely figures!
Oh and there were a few other items in the package....but more of that anon.

Tapadh leabh! Thank you to Tim, and to Morina, John's widow and ultimately to John. I'm sure these Hielan' lads will do John proud sometime this fall when my ECW Scots march across a table top.
Posted by Ross Mac rmacfa@gmail.com