Lost in the Fog, the Battle for Centerville

The 2nd Test Battle has now been fought and a cracking game it was too, unfortunately this report begins with an apology and a fistful of excuses. The bottom line is my camera was out of batteries and I was both tired and subject to a plethora of domestic duties, not to mention a trip to town to see if I couldn't get the Graf Spree in and out of Montevideo.  Instead of waiting, I indulged myself and played a turn or two when ever I could grab a couple of minutes, early morning, lunch time, on the way to bed etc., and my recollection of the details is almost as fuzzy as the poorly lit cell phone pictures.  (Have I ever mentioned how little natural light I get in my room and how poor the artificial lighting is? Its on my list. Ain't renovating 150 yr old houses fun? esp relying largely on shoestrings for materials? Worth it though.) Anyway the many pictures vary from bad to completely un-usable  so I am just going to use enough over views to give a vague impression of how this game looked vs the MacDuff game. 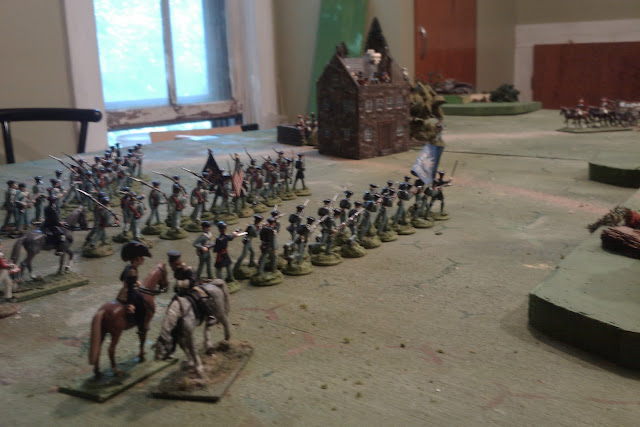 Through the 1/2 light of morning, The columns of the Oberhilse Field Force approach Righton.
Stuart Asquith's scenario called for the militia to be 2/3rd of a regular unit with a corresponding reduction in effectiveness. Since my rules penalize militia fairly heavily, I thought they may have ended up even weaker than he intended. For the 2nd game, I made 1 unit militia but at nearly full strength (16 vs 20), made another only 12 strong but made them regular and made the last group 12 strong but called them irregular.

The plan was for the rest of the units to be 20 line infantry or 12 light instead of the 12 or 8 fielded for MacDuff, and 12 cavalry instead of 6. However, my cavalry had been raised as either 9 or 10 man units, depending on whether they were formed when I was thinking of using Charge! or not, so 12 man units were out. I decided to settle on 8 man squadrons capable of acting as 4 man troops when called for. (Still haven't written that into the rules and probably won't, I might just take out the rule inhibiting it which I ignored!)  For the  infantry, I called on some 1812 units to make up numbers but decided to field the Blue Guards and Royals as 12 man Elite units rather than replacing them with 1812 fellows. The Jury is out whether 12 Elites are equal to 20 Regulars but in any case I'm intending on fielding them as 20 man units so it was a daft experiment, typical of the sort of thing I might try late at night when I should be going to bed, not setting up a game!  (If I'm going to game on into my 90's I need to get used to making concessions to decreased mental stamina!)

At last the table was set and I began to carry out the same battle plans with increased numbers of troops per unit and using the revised Hearts of Tin. 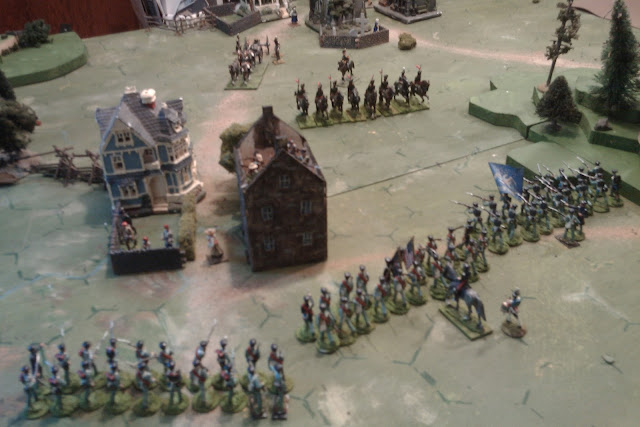 The Republican battle line forms, watched by a handful of Irregular cavalry.
The militia was evicted smartly from Lieuton with minimal losses to the two battalions of Oberhilse Volunteers but in Righton, the irregulars proved to be made of sterner stuff and repulsed several attacks. The irregulars are no better in combat but are not as fragile. These were my new unit and this time, earned honours of the day. Rallying in support of the Queen's artillery, led by the General in person and aided by a troop of the Director-General's Bodyguards, (not to mention some lucky dice both hits inflicted and hits avoided) they saved the gun several times seeing off Blue Dragoons and infantry as they were slowly forced back towards the table edge.

The bottom line though, is that again, both villages had fallen before substantial reinforcements arrived. This time, however, the  attacking force did not look vulnerable to a counter attack so apart from a rather disastrous spoiling attack by the Irregular lancers (who knew the enemy's old dice had so many 6's in them?), the Queen's troops formed a defensive line in front of Centerville and waited. 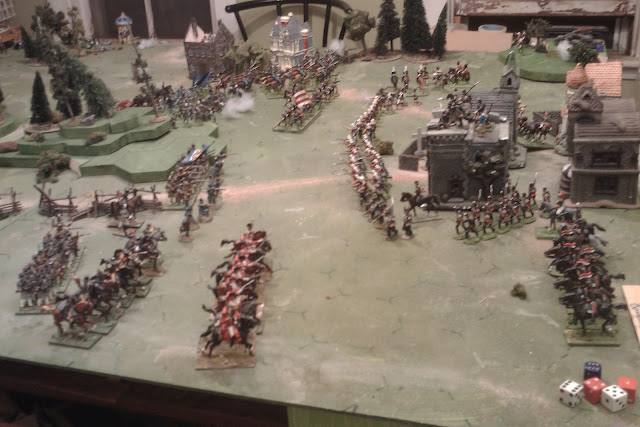 Turn 7. The view 1/2 way through the battle. The last Red infantry is just arriving.
The last 7 or 8 turns of the game (I lost track despite the Officer of the Watch on the turn record chart) saw a series of attacks and counter attacks with Red eventually being driven back into the town.  Both armies had taken heavy damage, but still had fight in them. There was no possibility of a Red counter attack and while Blue had enough strength to renew the assault on  Centerville, fighting through the streets was liable to continue until well after dark with the issue still in doubt. If it was a campaign, they would not have pressed the issue and so I called the game. This time with 2 communities in their hands, it was a Marginal Victory  (Winning Draw is Stuart's term)  for the Blue Army of the Republic of Oberhilse. 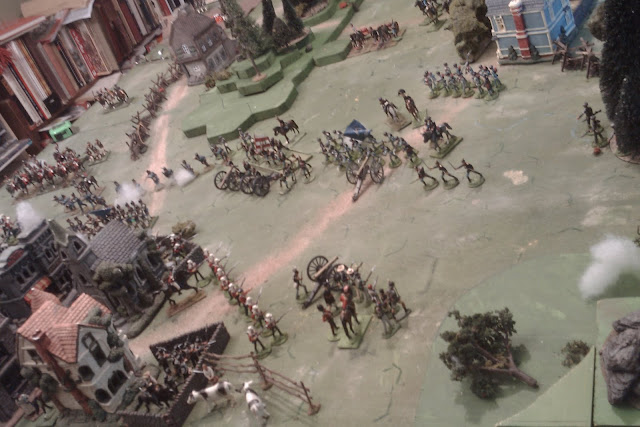 So why do I think HofT will be better for my campaign than MacDuff?  There are fewer details for each combat, things that are partly tactics and choices in MacDuff are just die rolls in HofT and so MacDuff ought to form a better narrative, but at the end of the day, there seemed to be just as many memorable moments in the Hoft game and manouvering brigades of 60 men about the table rather than companies  of 12 or even, occasionally, battalions of 36 just felt more like what I picture for a campaign. Conditioning I suppose but the decreased ranges also helped make the table feel bigger.

On top of that, not only was the game as exciting and lasted for nearly as many turns, it was played with twice the number of figures in about 1/2 the time. More figures to paint! Yes!

I'm ready now to clear the table and chomping to get going on getting units up to strength, adding some Red  cavalry and getting all the units off the washers and bases and onto their own little bases, but first, I have one more play test for the sake of thoroughness. The Portable Game II will gets its outing. I may swap the period though, just for variety sake.
Posted by Ross Mac rmacfa@gmail.com