Who would have thought that the people of the woods would be the first army ready to go, 48 points, flocked and all. A chaotic, undisciplined, if well meaning, horde of people and animals.  Of course they are close to the heart, 2 big cats, not to mention several scantily clad women of power. What's not to like?

In Hordes of the Things terms the army consists of: 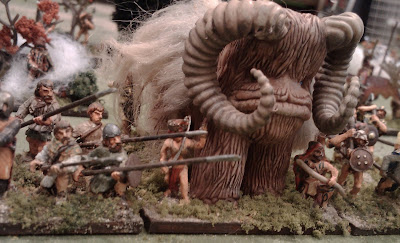 Queen Johanna II  (I suggested to the former Queen Johanna of Valdur that she change her name now that she was being reborn as a Queen of another land but she wouldn't hear of it. The Behemoth that she guides into battle started life as a toy Bantha. I tried fitting a howdah full of Pictish archers but that somehow implied mastery or at least domination of the beast which is contrary to the ways of the forest folk so I removed the original saddle and  the escort figures run along side. 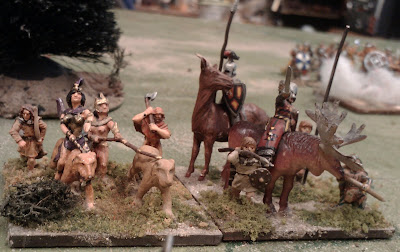 On the left we see two scantly clad Garrison Sword & Sorcery warrior-priestess types with their Lion companions and the usual ghilllies running along behind. On the right we see Creigadh (which in my rusty Scots Gaelic means something akin to Rocky) the Beast Master general riding that odd hybrid creature with the antlers of a Moose and the body of a Caribou. His companion is mounted on a fierce war antelope (which looks oddly like a 54mm  Marx dairy goat but they can be pretty nasty in my experience) until such time as another Moose-ish mount can be found. Once again there are a scattering of ghillies. For those wondering, the kneeling Pictich archer  is an S Range Minifig and amongst my oldest figures. For 30 years they have been without a place. If I knew then.....I'd have ordered 100 or more S range Picts, oh well. The other figure on this base is a PB Scots Irish noble from the earlier barge pole days. These were my very first metal ancient figures. They were originally done as fierce barbarian light infantry for my Valdurian army, (the heavies being weeny converted Airfix) then tidied up and repainted as Late Roman auxiliaries then redone yet again as medieval Scots skirmishers. Its good to have them home. 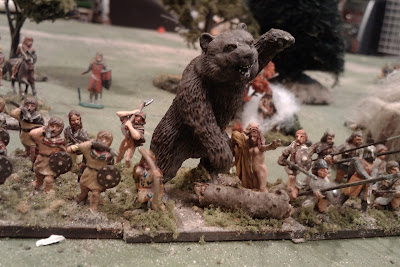 Another Behemoth. I had  another, slightly smaller bear but I couldn't lay hands on it and after all, if you are going to have a behemoth, it might as well be BIG (even Davy Crocket seemed impressed in the original 54mm Barzso play set and is depicted using a knife rather than grinning). The guiding priestess is an old Ral Partha figure, again from college days. You may sense a theme here, getting the animals to co-operate seems to involve women taking off most or all of their clothes. Not my fault, that's just how it is! Anyway, the men fighting along side them seem to have followed suit. 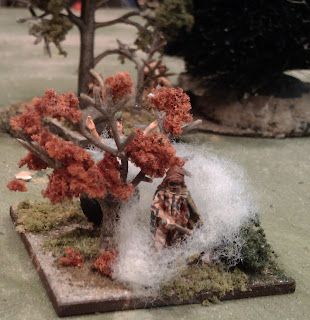 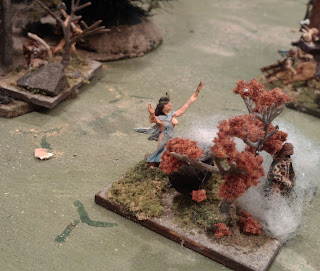 When I first put this Garrison witch together with the cauldron, I thought "Magician"! But the kind of magic which blasts people like long range artillery just seems out of place with these "in harmony with nature" folk. A Sneaker seemed more likely but you can't really sneak about with a cauldron and anyway, it seems hard to picture this pretty witch doing violance at the other end. She'd mostly likely get someone else to do that. Then I looked at the nearly naked axeman I had guarding her, a Ral Partha figure I think, and a vison of Conan as a thief stealing into the enemy stronghold came to mind. Still no cauldron but suddenly I pictured the scene from the finale of Excalibur when Merlin draws the Dragon's Breath from Morgana to cloak Arthur's approaching army in a mist. Ahha! So the witch, in a safe location, calls up a mist from the cauldron to cloak the warrior-thief-assassin, the Man of the Mist, camouflaged with woad as he stalks off to do or die (or flee 600 paces as appropriate).

In behind, in the patch of woods, you can just spot my Lurkers. It seemed like just the role for these kneeling Picts with their woad and their cloaks over their heads but 5 stands of Lurkers seemed kinda pointless so I mixed most into the Shooter bases. Then I looked at the Ral Partha Scot waving a big axe and wearing his hood over his head and everything else left to swing in the breeze. Axe murderer and flasher all in one, a perfect Lurker.

There is one more character, a late comer but I don't have a picture. Late last night, the Death Dealer under went a heart felt conversion and with a change of cloak, is now the Green Knight! As a born again Environmentalist and Recycle-Reuser, he of course, counts as a Paladin.

Which brings us to the little folk. 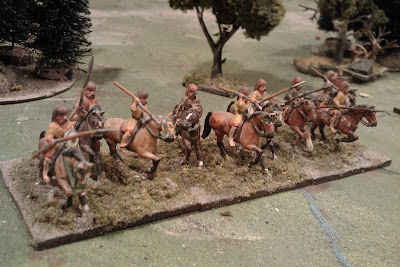 These are PB minifig Picts, late arrivals to my college army,  1/2 the figures are from my original dreaded Pictish cavalry who trained all summer in special wedge tactics with the sole job of breaking Simon's as yet undefeated Goths, an Irregular B light cavalry unit whose standard was a fly that wondered into a nearly set bit of epoxy putty and was impaled on a pin, a unit which never rolled less than +2 (until they met the Picts...). Nuff said. Now they are just scruffy riders. 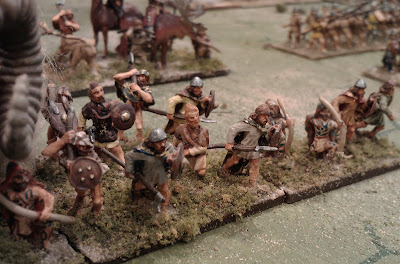 Here are some of the archers and warband. Some of the spearmen can be seen beside the Behemoth Bear. These are a mix of my old Minifigs, Ral Partha Scots, Prince August Barbarians and the lonely Minifig Alexander Nevsky Russian armoured axeman who commands the spearmen. (I have more of the Scots-Irish figures, but these were the later Minifig version with tiny, thin thin javelins, most of which are now broken and which were never as intimidating as the heavy javelins the original version carried)

The other 3 armies are all formed with enough figures for 48 pts each and are on the shelf but I ran out of time and bases so each has a unit or 2 which is waiting for some work, and none are flocked.

The Cavalry army has remained untouched but having 2 balanced armies just didn't feel right and so some shuffling has allowed me to follow the original idea and field a 48 point Scots army but this time as the People of the Loch. Sixteen stands of Spears at the heart of it. They have managed to steal the Sky Boat off the slips, a causa belli for sure, but other than that they nicely form a Double DBA Scots army.  Actually, a light went on part way through the process and all of the armies are now arranged so as to be able to field armies using HotT, DBA, Armati or Gathering of Hosts or other rules. If I draw on all the armies then I can still field an historical Scots army for any of these rules, including a Triple DBA or an Armati one. I still need archers and cavalry if I am ever to fight Scots vs English at home but I'm not tempted. If Ron's English don't come out, I'll fight fantasy.

A new 5 foot shelf is now up and all 4 armies fit comfortably with room to grow. In the corner are enough spare figures for 4 DBA armies to go on Ebay once they are refurbished, 2 medieval Scottish, 1 Dark Age British/Welsh/Strathclyde, 1 Scots Irish. Best of all, on the old shelves is now enough space for my planned 40mm 19thC armies.
Posted by Ross Mac rmacfa@gmail.com